The “Guardians of the Galaxy” actor and former WWE superstar took to Instagram on Saturday to share a black-and-white photo of himself featuring two new social justice-inspired tattoos, supporting the protests in the wake of Floyd’s death and the Black Lives Matter movement.

The ink on his left hand had the opening words to the Preamble of the United States Constitution, “We the people,” while Bautista had “I can’t breathe,” referencing Floyd’s death last month, written on his right hand.

“Brothers and sisters! Be relentless in the pursuit of justice,” he captioned the black-and-white photo. “Be unintimidated in the fight against oppression. We’re here together to remind each other what we’re fighting for.”

ANGELINA JOLIE SHARES THOUGHTS ON SYSTEMIC RACISM, WONDERS IF HER DAUGHTER WILL BE AFFECTED

Bautista, 51, continued: “I want to forget but I won’t let myself. There’s too much at stake. Peace to everyone fighting for a dream. #OneNation #OneRace #DreamChasers #icantbreathe #WeThePeople.”

Bautista has been outspoken about social justice reform in the past, according to People magazine. 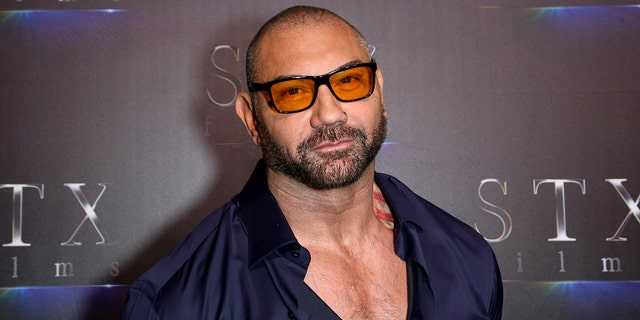 Dave Bautista attends ‘The State of the Industry: Past, Present and Future’ STXfilms presentation at The Colosseum at Caesars Palace during CinemaCon, the official convention of the National Association of Theatre Owners on April 02, 2019, in Las Vegas, Nev.  (Gabe Ginsberg/WireImage)

“Waking into this week like my hometown painted a giant a– beacon of hope and change on the streets of city blocks pointing right at the heart of the country,” he wrote in an Instagram post last week. of Washington D.C., which had “Black Lives Matter” painted in giant yellow letters down the city’s 16th Street near the White House.

Bautista added: “Like deal with it! Like we the people demand change. Like we’re all together in this and we will not be doing this again in 10 years. We’re too connected. We’re too united. And nobody is looking the other way any more because all lives can’t matter until #blacklivesmatter … Peace to everyone who fought their hearts out and will continue to fight for a dream. #onenation #onerace #DreamChasers.”

This comes amid a period of civil unrest in America while protests across the nation oppose police brutality toward black individuals.

The protests began after the May 25 death of Floyd, who died while in police custody in Minneapolis, Minn., after officer Derek Chauvin knelt on Floyd’s neck for over eight minutes.