Eleven kids are a lot to look after.

A mom in England has come up with a unique way of keeping track of her kids when they go out. She made up numbered shirts so she can quickly make sure everyone is accounted for. 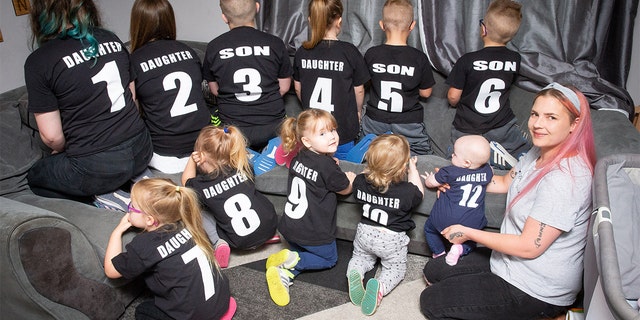 As the parent of eleven children, Nicole Sutton made shirts with numbers on them to help keep track of each of her children. (Mercury Press)

Nicole and Joseph Sutton are the proud parents of eleven children, The Sun reports. The kids, whose ages range from 14 to just five months, are named Rhiannan (the oldest), Lacy, Mackenzie, Skylar, Henley, Cobi, Parker, Hadley, River, Ocean and Navy (the youngest). The Suttons also had one child who was stillborn, which is why Navy was given No. 12.

According to the news outlet, Nicole explained, “Shocked was my first reaction when I found out I was pregnant with Rhiannon. I had the contraceptive implant so I never expected to fall pregnant. We didn’t find out until I was already four months gone. I took a test because I was putting weight on but I never thought it would be positive. I had no idea how we would manage but any child is a blessing so we just rolled with it.”

Joseph, 35, reportedly didn’t even want children, let alone a big family. He says now that he has one, it might be a “madhouse,” but he “wouldn’t change it.”

Nicole, 30, continued, “After I had my first baby I just found I loved being a mom so much and looking after my daughter. I’m not close with my family so the more I had, the more I loved it. When we’re out I’m constantly head counting without even thinking.”

This has led the mom to make up numbered shirts for the kids to make counting easier.

“I just see us as a normal family with a few extra running around,” she said. “Parenting is the same for us all — whether we have one or 12, we are all just doing our best.”

When Lina Baez-Rosario moved to the United States as a young girl, she missed her home in the Dominican Republic....

Jimmie Johnson is just as confused as everyone else about his plight with the coronavirus. A positive test caused the...

US appeals to proceed with 1st federal execution in 17 years