LONDON — Just after 10 a.m. on Monday, Cathy Slater, the owner of Dulwich Books, stood waiting to welcome her first customers into the store in months.

Bookstores in England were allowed to open their premises on Monday for the first time since the country went into lockdown in March. Slater said she was overjoyed to be back and had prepared especially: There was a vase of flowers on a table by the entrance, and a huge bottle of hand sanitizer on the counter.

The first customer wasn’t what she had hoped for. About 20 minutes after opening, a man stuck his head around the front door, and shouted, “Do you sell Post-it Notes?”

But at 10:30 a.m., another customer, Helen Boome, arrived and headed straight to the children’s section. “Is it OK to touch?” she asked. After getting the all-clear, she grabbed a book about Greek myths for her son. 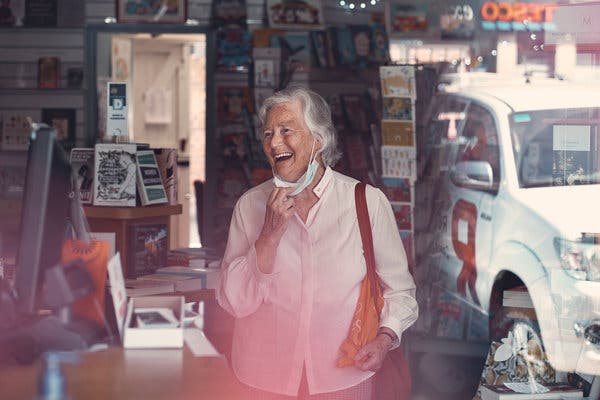 Olivia Holmes browsed the shelves at Dulwich Books in South London on Monday.Credit…Tom Jamieson for The New York Times

Within minutes, Olivia Holmes walked in wearing a face mask. She was looking for “The Redeemed,” by Tim Pears, the final part of a trilogy set during World War I. Then another customer arrived, and a fourth loitered at the door: A sign in the window said, “Maximum of three people in the shop.”

The atmosphere was vibrant, if a little constrained. And it was a vibe that echoed at five other booksellers in the capital.

Matthew Nsubuga, right, and other customers checking out titles in Bookmongers of Brixton, a used-book store, on Monday.Credit…Tom Jamieson for The New York Times

On Monday morning, Patrick Kelly, the owner of the used-book store Bookmongers of Brixton, sat behind a see-through plastic screen, looking at his store’s heaving shelves. He was worried about the future, he said, because the neighborhood around the store had gentrified so much over the past decade and he’d become reliant on “tourists and day trippers” to get by. “We can reopen today, but when we see a tourist again is anybody’s guess,” he said.

But soon, a trickle of customers started buying. Paulo Sousa, 40, bought a medical textbook, though he said he didn’t actually want to read it. Instead, he said, he was going to cut a shape in its pages and hide a present for his brother inside.

At the back of the store, Matthew Nsubuga, 28, was staring intently at a shelf of science fiction books called S.F. Masterworks, with vivid yellow spines. “I’ve been waiting for the shop to reopen, as I knew they had a lot,” he said.

Nsubuga said that he’d been reading science fiction during the lockdown — including “Dune” by Frank Herbert — and that books had “helped me survive.”

“Reading kept my mind off all of the other issues in the world,” he added. He left the store with six books costing 27 pounds, about $34, in total.

Kelly smiled. “This has been fantastic,” he said, sounding surprised at the quick sales. “The doom and gloom is going a little.”

An employee in the High Street Kensington branch of Waterstones, Britain’s largest book chain, on Monday.Credit…Tom Jamieson for The New York Times

In May, Waterstones, Britain’s largest book chain, with over 280 stores, announced a new safety measure for reopening. Any book that a customer touched but didn’t buy would be put away for 72 hours to cut the infection risk.

At midday Monday, staff at the bright and spacious High Street Kensington branch were putting the policy into practice, having placed about 30 books — including several by Jean-Paul Sartre, the author of “Nausea” — onto a cart that would be wheeled into isolation.

Many staff members wore plastic face shields but none of the half-dozen or so customers seemed to mind. “I’ve been missing bookshops more than anything else,” said Jeremy Smith, 54, a charity administrator who was clutching a notebook containing the titles of dozens of books he wanted to buy. He’d already found one: Angie Cruz’s “Dominicana,” about an 11-year-old child forced into marriage.

Daunt Books, in the Marylebone district of Central London, was conceived as a bookstore for travelers, with many of its shelves arranged by country so customers can find books about places they’ll be visiting. James Thornington, a bookseller there, said on Monday that he hoped people would still want to buy them even if they couldn’t go abroad — maybe just to dream a little.

That has been his approach to reading during lockdown, he said. He’d reread Gerald Durell’s “My Family and Other Animals,” about a British writer’s ramshackle childhood on a Greek island. “It made me feel like I wanted to go right away,” he added.

Few of Daunt’s customers seemed to be buying travel books on Monday, though some of their choices showed a desire for escape. Sally-Anne Stein, 57, had bought “The Glossy Years,” an autobiography by Nicholas Coleridge, the British magazine executive. “It’s the complete opposite of what’s going on at the moment,” Stein said. “It’s the ’80s, ’90s, everything’s fake and nothing’s miserable or bad.” Then she walked off, smiling broadly.

Word on the Water, King’s Cross

Word on the Water, a bookstore on a barge in a canal, has been open since June 1, since open-air markets were allowed to open before enclosed retail spaces.Credit…Tom Jamieson for The New York Times

Word on the Water, a bookstore on a boat moored on a canal near the railway station King’s Cross, actually sneaked in an early opening on June 1. By shutting its doors and only trading from shelves on the barge’s exterior, it had been able to classify itself as an outdoor market, a type of business that opened in an earlier lockdown easing.

James Bentley, 56, a bookseller there, said on Monday that sales on June 1 had been phenomenal, as regular customers dropped by. But now the business was relying on passers-by.

On Monday afternoon, several people stopped to buy books, largely grabbing novels, including one by the Portuguese writer José Saramago, a Nobel laureate.

Lauren Gibbs, 34, said she had been cycling past and had stopped to make a video with her cellphone to capture the Edith Piaf song playing from the barge. Then she decided she should really buy something, she said. She picked out “Jazz Poems,” an anthology featuring works by Langston Hughes and Gwendolyn Brooks.

Jonathan Privett, one of the store’s owners, said his big sellers since reopening had been titles that were relevant to the Black Lives Matter protests that have recently swept Britain after spreading from the United States, and books about art. “Maybe because the galleries are shut,” he said.

Privett said that whatever happened to the business over the next few months, he’d “keep making the most of dry days.” He sounded a little sad, so Bentley tried to lift the mood. “Those trees give fruit in autumn, don’t they?” he said, pointing at some nearby greenery. “We can eat that,” he added, with a laugh.

A customer collected a book from Pages of Hackney on Monday.Credit…Tom Jamieson for The New York Times

Jo Heygate, the manager of Pages of Hackney, stood behind the counter, looking out at an empty shop floor, and said that she had decided to stay closed to browsers, for now. That was partly because her store is tiny, she said: To comply with Britain’s social-distancing rules, which require people to stay about six feet apart, she could only have admitted one customer at a time.

But it was also because her store had, somehow, made a success of the lockdown, she added. At first, the staff had panicked, thinking they wouldn’t sell anything at all. But around a month in, Pages of Hackney began an online store — something Heygate said the business probably should have done several years earlier. “I sold two books about transgender resistance in half an hour of the store going up,” she said. “Those would normally have taken a month to sell.”

She put the success down to the shop’s loyal local customer base, as well as how interested people were to read books on issues about race at the moment, a subject the store had always pushed. Layla F. Saad’s “Me and White Supremacy” was a big seller, Heygate said; so was Jeffrey Boakye’s “Black, Listed.”

On Monday afternoon, there were almost 80 bags of books piled on the floor awaiting customer collection, and two boxes of mail orders ready to be sent out. A cycle courier was also careering around East London making deliveries.

The fact that people wanted books on vital topics was great, Heygate said. But she really wanted to get customers in the store again, to talk about the issues and to attend events. “It’s like a boring, lonely, mail order business, which isn’t what a bookshop’s about,” she said. “A bookshop’s a living thing.”