Bookstores Are Struggling. Is a New E-Commerce Site the Answer?

In January, when Andy Hunter, the publisher of a small press, started an online bookstore that he pitched as the indie alternative to Amazon, many in the book business had their doubts. Earlier efforts to create a portal for independent booksellers had done little to chip away at Amazon’s market share, and even retailers like Barnes & Noble have struggled to compete.

Mr. Hunter felt there was an unexploited opportunity. Seizing even a fraction of Amazon’s sales would be a windfall for independent stores, which would receive a cut of the site’s profits. Mr. Hunter told investors that within two years, his site, Bookshop, could reach $30 million in annual sales, a projection that struck some as wildly optimistic.

Then, in March, the coronavirus pandemic forced bookstores across the United States to shut their doors. Hundreds of bookstore owners, many of whom couldn’t enter their stores to fulfill online or phone orders, joined the new site.

Now Bookshop is on track to exceed $40 million in sales this year, blowing past the sum that Mr. Hunter initially hoped to reach by 2022. The site sold some $4.5 million of books in May, and more than $7 million in the first two weeks of June. More than 750 bookstores have joined, and Bookshop has generated more than $3.6 million for stores. The company is preparing to expand its operations to Britain later this year, where it plans to partner with the book wholesaler Gardners.

“There were a number of skeptics about whether this would work,” said Bradley Graham, co-owner of Politics & Prose in Washington. “Bookshop has certainly worked better than anybody anticipated, because nobody anticipated a pandemic.” 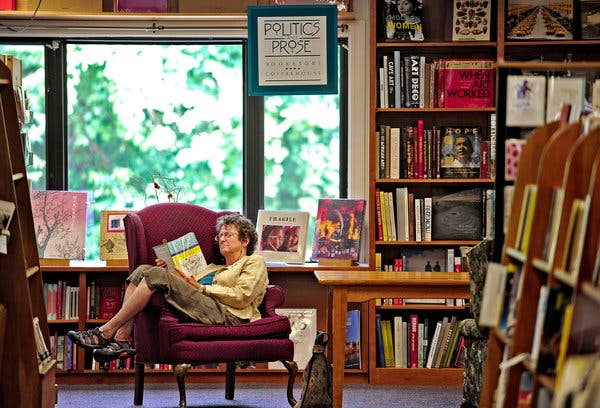 Some wonder whether Bookshop will remain a viable player in the online retail ecosystem as stores begin to reopen, and customers who turned to the site during the shutdown revert to in-store and curbside shopping. Meanwhile, Amazon, which accounts for some 70 percent of online book sales, has strengthened its position as the world’s largest online retailer. The company reported $75.5 billion in sales during its most recent fiscal quarter, a 26 percent increase from the year-ago quarter.

Mr. Hunter is bullish about the potential for post-pandemic growth. The American Booksellers Association has more than 1,880 member stores, and about 40 percent of them have started using Bookshop. There’s also more ground to gain with customers: Just 21 percent of book buyers who shop at independent stores had heard of Bookshop, according to a survey of more than 4,000 people conducted by the Codex Group in late April.

“If it’s sticky and it lasts beyond this Covid crisis, it’s going to really help bookstores thrive,” Mr. Hunter said.

Not everyone sees Bookshop’s growth as a boon for independents. Last week, at a virtual town hall organized by the American Booksellers Association, some members questioned whether Bookshop was poaching business at a moment when stores need every sale. Mr. Hunter said that the site was created to capture book sales from Amazon, not independents.

“If we ever felt we were damaging indie bookstore sales in any way, we would change course,” he said, according to a report in Publishers Weekly.

Some bookstore owners have bristled at the way that the site has been held up as their industry’s savior.

“There’s a significant danger to people thinking that this is saving bookstores,” said Brad Johnson, the owner of East Bay Booksellers in Oakland, Calif. “If people have any idea that they want to help bookstores, they should order directly from bookstores.”

Mr. Johnson, who has a page on Bookshop but mainly sells directly to customers through his store’s website, says he’s unlikely to stay on Bookshop. He worries that it will become “another large centralized competitor for us.”

Some bookstores have avoided the platform. Riffraff, a bookstore and bar in Providence, R.I., quickly redesigned its website to make online orders easier when it closed in March, rather than using Bookshop.

“We didn’t want to risk losing our customers to this Amazon alternative that is very convenient and easy to use,” said Emma Ramadan, the store’s co-owner.

Mr. Hunter had the idea for Bookshop nearly a decade ago, when he was working as the editor in chief of Electric Literature, a nonprofit digital publisher. He had watched with alarm as independent bookstores struggled to adapt to the rise of online retail. But he found little support for the proposal. “The people I spoke to didn’t really think it had a chance, so I didn’t pursue it,” he said.

Then, in early 2018, Mr. Hunter, who is now the publisher of the independent press Catapult and the website Lit Hub, met with representatives of the American Booksellers Association. The trade group asked Mr. Hunter for suggestions on how to improve IndieBound, its e-commerce site for independent stores. Instead, he proposed building something from scratch — a site that would offer seamless online shopping for book buyers who want to support local bookstores. Shoppers can select a particular store to buy from, or they can buy straight from Bookshop.

Orders are fulfilled through Ingram, a large book distributor, and mailed directly to customers, so stores don’t have to have the books in stock or process inventory. Bookstores get 30 percent of the list price — less than they would typically make from a direct sale — but don’t have to pay for inventory or shipping.

Bookshop doesn’t profit from the sales that go through particular stores. Instead, it makes money through its direct sales and from affiliate sales, when media organizations, book clubs and social media sites feature links to Bookshop in book reviews or other coverage. The site now has more than 8,000 affiliates, including The New York Times, The New York Review of Books, BuzzFeed and New York magazine. IndieBound, which runs a similar affiliate sales program, is merging its operation with Bookshop’s. (For books that are sold directly by Bookshop, or through media affiliates, 10 percent of the list price goes into a profit pool that gets distributed to independent bookstores; so far, the site has funneled about a million dollars into the pool.)

The launch nearly coincided with the pandemic, which has devastated brick-and-mortar bookstores. In April, bookstore sales plummeted to $219 million, a decline of more than 65 percent from April 2019, according to figures released Tuesday by the Commerce Department. In the first four months of this year, bookstore sales fell by 23 percent compared to the same period in 2019.

Some stores are barely scraping by. Lisa Neuheisel, the owner of the Sequel Bookshop in Kearney, Neb., closed her store to customers on March 22 and didn’t have a way for them to shop online. She created a page for her store on Bookshop after she saw another bookseller’s Facebook post linking to the site. Bookshop accounted for roughly half her sales in April and May, while the rest were curbside pickup, she said. “The sales have been a lifeline for us,” she said.

Danielle Mullen signed on with Bookshop when the pandemic forced her to close her store, Semicolon. “It meant we could stay in business, and that’s all we’re trying to do,” she said.Credit…via Danielle Mullen

Danielle Mullen, the owner of Semicolon, a year-old bookstore in Chicago, also joined Bookshop in mid-March. During April and May, Bookshop accounted for around 70 percent of the store’s roughly 1,800 orders. “It meant we could stay in business, and that’s all we’re trying to do,” she said.

More recently, Ms. Mullen has seen a spike in sales through Bookshop as readers sought out books about race and racism and wanted to support black-owned businesses. Earlier this month, Semicolon sold some 30,000 books on the subject through the site over just a few days, a crush of orders that would have been difficult for her to process on her own, she said.

As Bookshop grows, a debate has emerged about who should benefit from it. Stores that have joined include comic-book stores and museum gift shops that carry books.

In March, Jeff Waxman, a part-time bookseller at Word, an independent store with locations in Brooklyn and Jersey City, found himself out of work. He approached other booksellers who had been furloughed or laid off, and proposed that they set up a page on Bookshop, where they could recommend books as “staff picks” and get a cut of the sales.

Mr. Waxman has since been rehired at Word and is no longer taking a personal cut of his Bookshop page. He has no intention of diverting money from bookstores, he said, but wanted to find a way to support out-of-work employees.

“It gives me hope that we’re finding new ways as an industry,” he said. “It was the tool that bookselling needed when we needed it.”