Retail Sales Rebound in May, but the Future Looks Dim 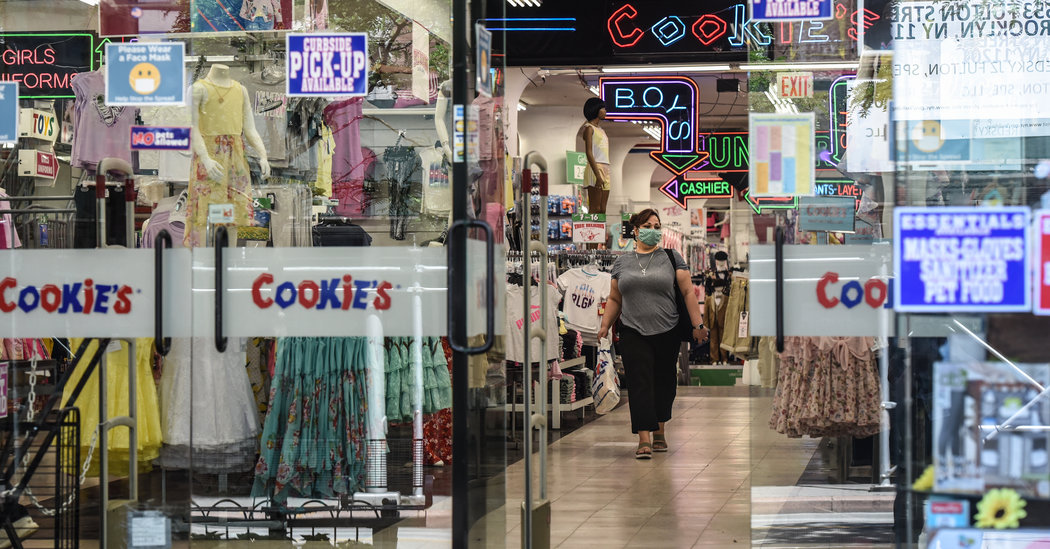 National retail sales rebounded in May as thousands of stores and restaurants reopened after lockdowns were lifted and federal stimulus checks and tax refunds fueled a burst of spending. But many of the stores and restaurants that welcomed back customers last month did so with fewer employees, reflecting a permanently altered retail landscape and an ominous sign for the economy as it tries to recover from the coronavirus pandemic.

Total sales, which include purchases in stores and online as well as money spent at bars and restaurants, rose 17.7 percent in May from the previous month, the Commerce Department said Tuesday. That followed a 14.7 percent drop in April, the largest monthly decline in nearly three decades of record-keeping, and an 8.3 percent decline in March.

Economists had expected a bounceback from April, when widespread business closures drove retail sales to their lowest level since 2012.

After more than a month of quarantine, May brought a tentative restart of brick-and-mortar retail across most of the country, with major chains like Macy’s and Gap reopening hundreds of stores. Some restaurants that had either closed or shifted their business to delivery and curbside pickup also reopened for in-person dining.

Driving some of the sales gains was warm weather, a sense of relief after weeks cooped up at home and optimism from some that the worst of the pandemic could be over. But they were also lifted by stimulus money — totaling $1,200 per recipient, plus $500 per child — that will run out in the coming months, with no indications that Congress intends to pass another round of assistance.

“I think a lot of it is lockdown fatigue,” said Beth Ann Bovino, chief U.S. economist at S&P Global. “I would caution not to be fooled by this large gain. We still have a long way to go in repairing the economy.”

No matter how fleeting, the rebound in May was a welcome boost, especially for small businesses like the Bookstore of Gloucester, an independent bookseller in Gloucester, Mass.

The store carries a selection of best sellers, books on race and books on the city’s maritime history. Even though it was selling only through curbside pickup and mailing out orders, sales were not much lower than in May last year.

“We were pleasantly surprised,” said Nicole Dahlmer, an employee.

She attributed the relatively robust sales to a loyal customer base and to longer waits at large booksellers like Amazon during the pandemic.

“The real test is if tourism holds up this summer,” said Ms. Dahlmer, who usually is paid to work in the store but has been working on a volunteer basis to help out the owner during the pandemic. She said she expected to return to a paid position soon.

Aneta Markowska, the chief financial economist for the investment bank Jefferies, said that while she had anticipated a jump in retail sales in May, it was off “a pretty low hurdle.” The bigger question was the sustainability of any improvement, since spending was bolstered by tax refunds and government stimulus efforts.

“By the time we get into July, those tax refunds will probably be largely spent,” Ms. Markowska said, “and then you’re back to, hey, what’s the underlying employment growth? Because that’s going to have to be the key driver of spending going forward.”

The positive numbers in May also mask some of the intense strain on underlying businesses.

While his White Electric Coffee shop in Providence, R.I., was closed, Tom Toupin took out a loan to keep paying his employees. He also sold a special “Stay at Home” brew online, donating 20 percent of the sales to the state’s Covid-19 relief fund.

In preparing to reopen this month, Mr. Toupin spent about $1,000 on a device that enables contactless payments and reconfigured the front counter and register to create more distance between employees and customers.

But in the first few days after reopening, the shop had about 60 customers a day, down from a typical 350. Mr. Toupin has had to waste food because he was not sure how many customers would come, he said. Five people are working in the shop now, down from the usual team of a dozen.

“I was so excited to open up the shop again,” Mr. Toupin said. “I may have opened up sooner than I should have.”

Major apparel chains and malls, which were hit especially hard by the closures, have also been aggressively pushing to reopen as quickly as legally possible to recoup some of their losses.

“There is some indication there is normal behavior out there,” said Jay Sole, a retail analyst at UBS, “where people want to go back to normal, they want to go have fun, get out of the house, and they’re buying the apparel they need to do that.”

But at the same time, many shoppers are encountering an experience that’s very different from what they are accustomed to. There may be long lines outside stores because only a limited number of people are allowed inside at a time. Changing rooms are closed in many places, forcing shoppers to approximate sizes and inevitably generating more returns. For some, shopping is simply less fun and far more transactional in the pandemic era.

On Sunday, shoppers waited outside the J. Crew Factory in an outlet mall in Westbrook, Conn.; signs said that the store’s capacity was 10 people and that masks were required. A greeter pointed customers to a table holding hand sanitizer when they walked in, and fitting rooms were unavailable. The shopping bore little resemblance to the leisurely, enjoyable experience that malls typically promote on their websites and in ads.

Still, outlet malls and other retailers in open-air spaces may be better off than indoor malls as Americans readjust to the new norms of shopping. Gap, for example, noted that it was seeing better results at Old Navy stores, which are often away from enclosed shopping malls, as customers were more confident in such locations and better able to take advantage of new services like curbside pickup.

Enclosed malls “seem like the weakest channel out there now in terms of traffic,” Mr. Sole said.

He said that while last month was better than expected for sellers of clothing and footwear, there was “a real wait-and-see attitude” about how back-to-school shopping might shape up in late July and early August and still concern about a potential second wave of the coronavirus.

Retailers are “hoping for the best and preparing for the worst,” he said.