As restaurants around the country look to reopen during the coronavirus pandemic, outdoor seating is becoming a survival option, and local governments are helping by cutting red tape.

If a restaurant in Louisville, Ky., for instance, had wanted to offer dining service on a patio before the pandemic, it would have had to apply for a permit, pay fees of $1,150 — and then wait, for up to six months.

To help restaurants get back on their feet after the coronavirus-induced shutdown, the city has waived its fee for outdoor dining and substantially shortened the processing time for applications. The approval for outdoor seating, which involves neighborhood review of a restaurant’s plans, used to take three to six months. Now, the wait is a couple of days.

This scenario is being repeated across the country as local governments rapidly rewrite the rules about how restaurants can operate when they reopen after quarantine shutdowns battered their businesses. And the cost for restaurants to open outdoor seating can be as low as a few thousand dollars.

The leisure and hospitality industry, which includes restaurants, suffered severe losses in April, shedding more than seven million jobs, but bounced back in May as furloughed employees returned to work.

With the spread of the coronavirus still a danger, many states are requiring that restaurants reduce their capacity to 25 to 50 percent of normal operations to ensure there is at least six feet between tables, in keeping with social-distancing practices. Some, like New Jersey, are prohibiting indoor dining altogether for the time being.

However, even as states take away capacity in the name of public safety, local officials are trying to give at least some of it back by allowing eating establishments to expand onto patios and parking lots, and even city sidewalks and streets. But the moves are disrupting neighborhoods and costing cities much-needed tax revenue.

The effort appears to be paying off. OpenTable, a provider of online restaurant reservations, has counted a tenfold increase in outdoor seating this spring compared with a year ago. 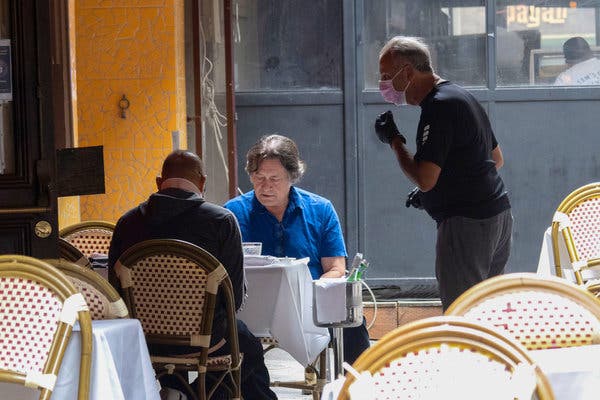 The restaurant industry supports the new flexibility on outdoor seating as a way to help restaurants regain their footing. Restaurants lost more than $120 billion in sales during March, April and May, according to the National Restaurant Association. The trade group also said that 3 percent of restaurants that responded to its surveys had already closed permanently because of the pandemic, and an estimated eight million restaurant employees are still out of work.

But the risk of contracting the coronavirus remains for patrons and employees. As of Saturday, coronavirus cases were climbing in 22 states amid reopening plans. Several Florida bars voluntarily closed their dining rooms recently after workers tested positive for the virus.

And some are wondering what it says about local regulations concerning outdoor seating if they are so easily swept away.

Pre-pandemic rules sought to ensure that restaurants adhere to health and fire safety codes, provide equal access to those with disabilities and protect neighbors from noise and disruption. The new practices raise equity issues, with some critics arguing that allowing restaurants to expand outdoors effectively favors customers over everyone else in a neighborhood.

Some cities could lose revenue, too. Procedures vary by municipality, but in many places, government agencies that review applications for outdoor dining solicit community feedback. Application and annual renewal fees in some places can add up to several thousand dollars a year. Some cities charge fees based on the amount of outdoor space used.

But with restaurants in dire straits and the clock ticking before some go under, governments are reducing or waiving fees and quickly approving plans they previously may have taken months to process.

“What you’re seeing now is the expediency of helping people instead of spending the time asking everyone if it’s OK,” said Matthew Kwatinetz, director of the Urban Lab at the Schack Institute of Real Estate at New York University’s School of Professional Studies.

Restaurants in suburban and rural areas may be able to add tables on their own property.

When Craft House in Dana Point, Calif., reopened after a two-month quarantine, it had to reduce seating indoors. But the restaurant also got the green light to turn 11 of the 20 spots in its parking lot into an impromptu dining area, strung with lights. Total cost: around $5,000.

“Luckily, there have been no issues from the neighbors,” said Blake Mellgren, the proprietor and executive chef.

In urban areas where restaurants may not have private outdoor space, governments are letting them set up tables on sidewalks, streets and public plazas. Even on-street parking spots are being used for impromptu seating areas known as parklets or streateries.

When Florida allowed restaurants to reopen at 25 percent capacity in early May, Tampa experimented with some of these approaches in a two-week pilot program. It suspended permit requirements for sidewalk seating, and it allowed restaurants to use adjacent on-street parking spaces for dining spots set off by planters, fences and traffic cones. Fire safety and accessibility requirements remained in effect.

The city also closed several streets to vehicle traffic, creating “cafe and retail zones” that were monitored by the police and code enforcement officers. To prevent people from milling around while waiting for tables, the city established a “no seat, no service” policy and asked people to make reservations.

In Tampa, some restaurants pushed back, arguing that road closures hindered businesses because they eliminated through traffic and made it more difficult for customers to pick up takeout orders. But city officials deemed the pilot an overall success and have allowed some streets to remain closed and the sidewalk seating to continue, said Carole Post, administrator for development and economic opportunity.

Cities in the Northeast are trying similar tactics.

In Hoboken, N.J., officials devised a small-business recovery strategy that went into effect on Monday. Restaurants may set up tables on sidewalks and parking spots until Oct. 15, when the new measures will be reassessed.

“A year ago, if you had asked any one of us to give up sidewalk space to businesses, we would have said absolutely not,” said Jennifer Giattino, president of the City Council and a proponent of the plan. “Now our thinking has changed to let’s try anything as long as it’s safe.”

Outdoor seating has its limits, of course, not the least of which is the weather. Although nice on a temperate day, it can lose its allure in rain or blazing or chilly days.

And alfresco tables may help some restaurants recapture some or all of the capacity lost indoors, but the strategy might not be enough for others to reopen, given current operating limits.

Landon Winery in McKinney, Texas. OpenTable, a provider of online restaurant reservations, has seen a tenfold increase in outdoor seating this spring compared with the same period last year.Credit…Cooper Neill for The New York Times

In Louisville, where indoor capacity is capped at 33 percent per state directive, some restaurants are taking a “lag and learn” approach, said Mr. Fischer, the mayor.

But Catherine Mac Dowall and Michael Kerrigan, proprietors of the farm-to-table restaurant Naïve, dived in.

The business partners, who are married, had long wanted to add seating in back of the building they rent in Louisville’s artsy Butchertown neighborhood. One thing that had always held them back were the “tons of hoops to jump through,” as Ms. Mac Dowall put it, to get everything approved.

But when she and her husband heard that the city had streamlined the process in its reopening plans, they quickly filled out a short online application. Once it was approved, they leveled the backyard, covered it with gravel and added tables.

The first day the new patio was open, almost all the restaurant’s customers sat outside.

Ms. Mac Dowall praised city officials for making the process so easy, while also expressing regret that the decision did not come sooner. “Why couldn’t it have been easier before?” she asked. “Why did it take a pandemic for the government to allow people to eat outside?”