The Rich Cut Their Spending. That Has Hurt All the Workers Who Count on It. 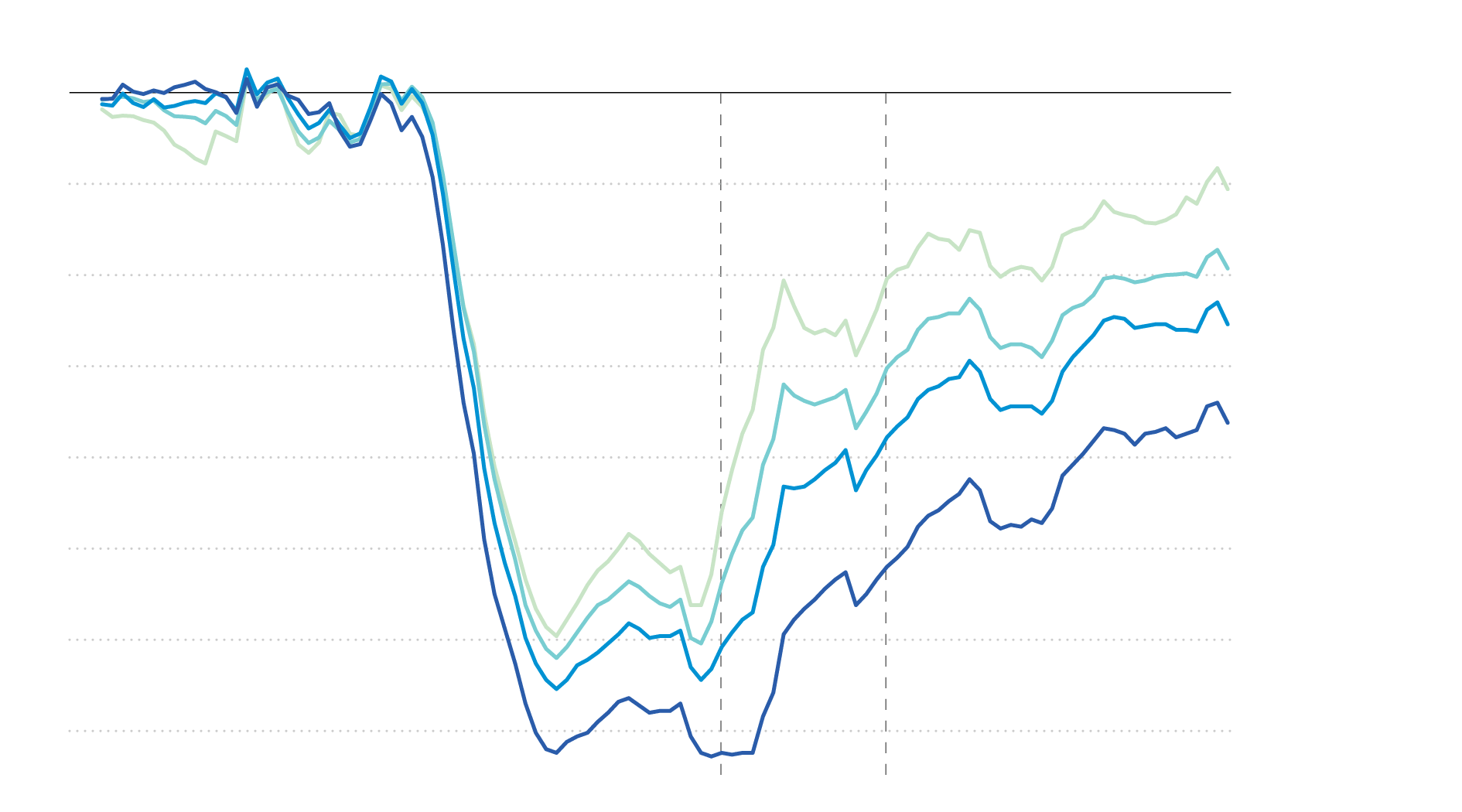 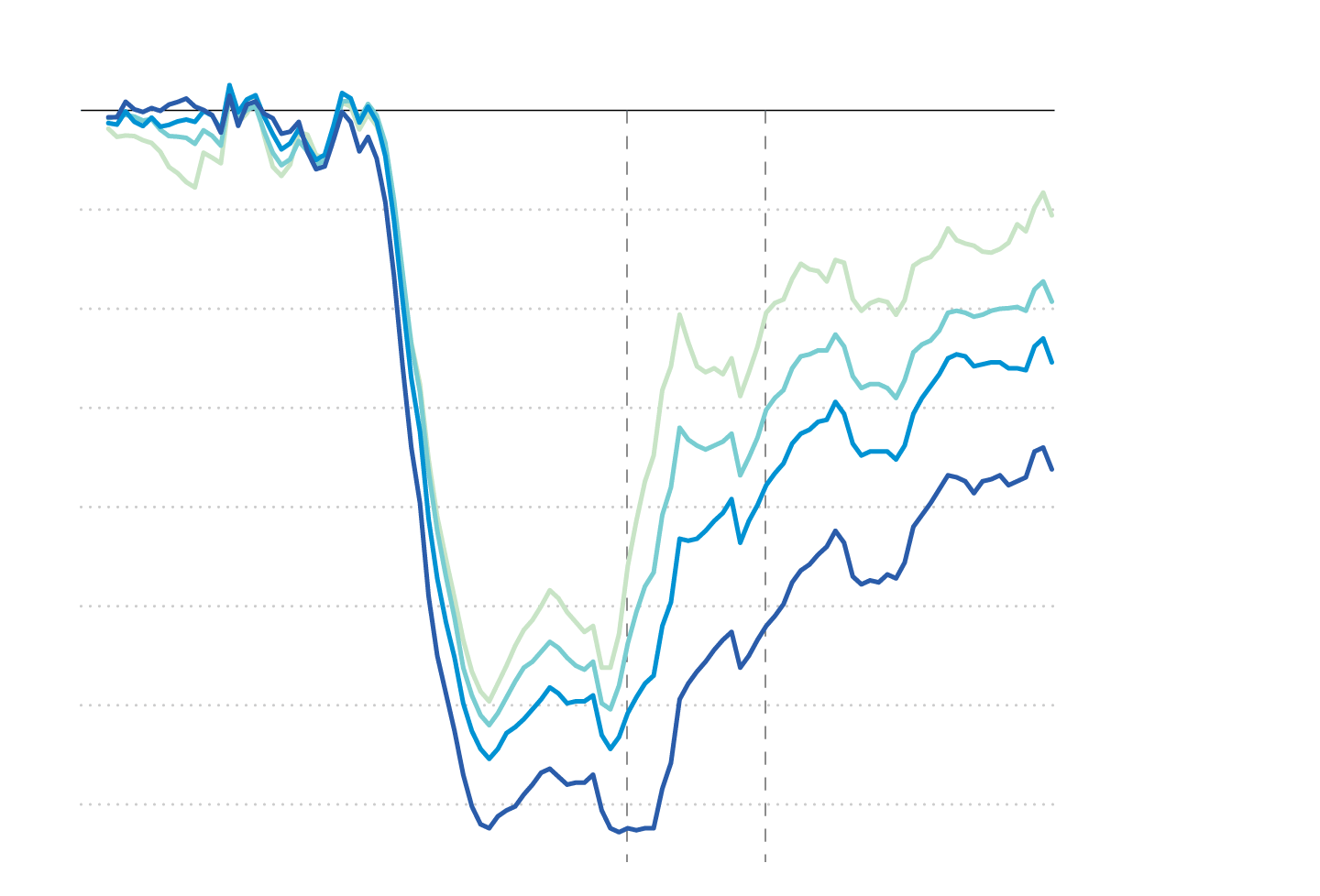 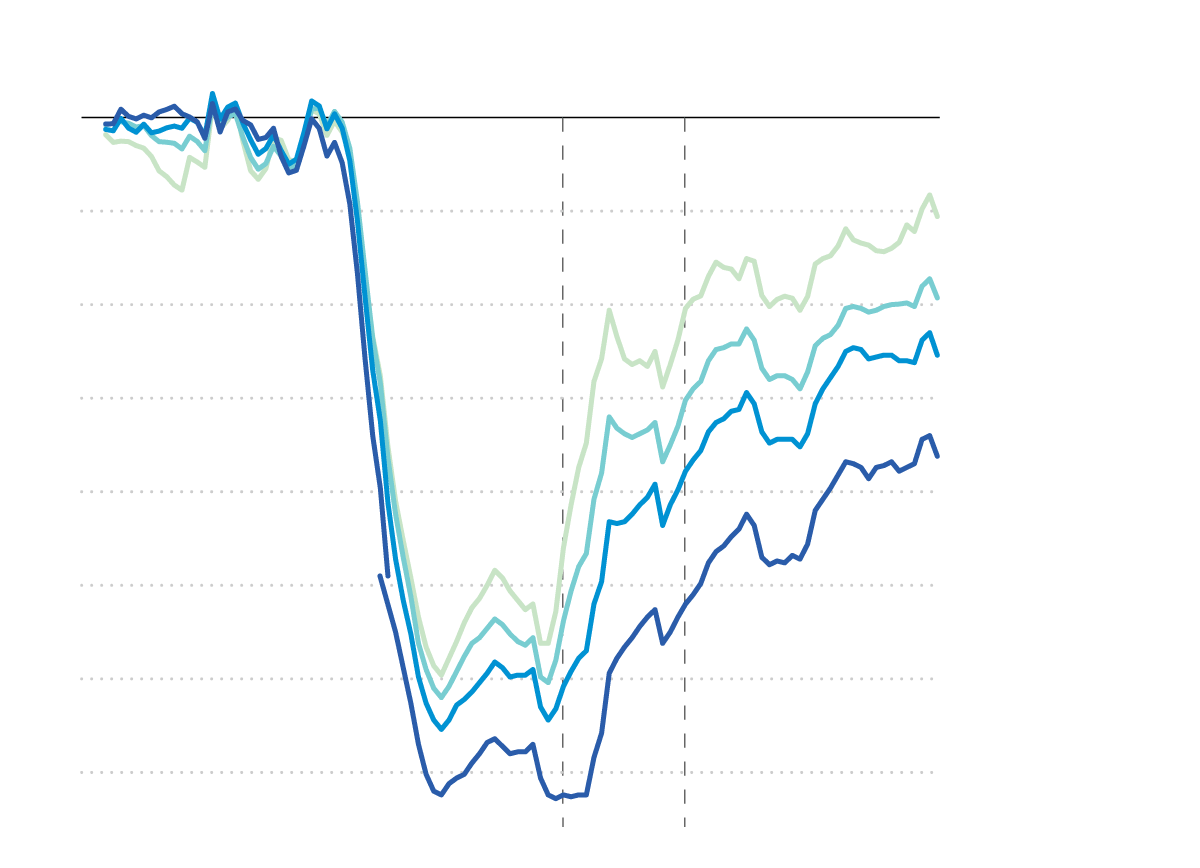 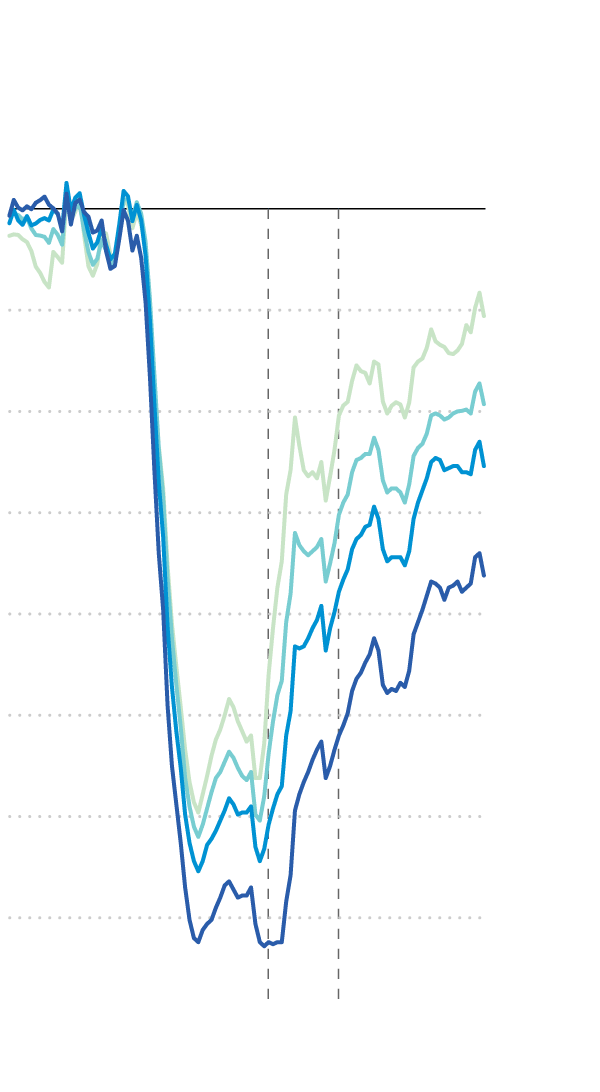 Note: Change calculated from seasonally adjusted January average. Income groups are based on the median income in the ZIP codes where consumers live. The data sample reflects about 10 percent of all national credit and debit card spending.·Source: Analysis of data from Affinity Solutions by Opportunity Insights

In the Manhattan restaurants around Lincoln Center, the tips often rose and fell with the changing playbill. A popular classic musical could mean more preshow diners, and more income. A more famous actress as Eliza Doolittle could do the same. The end of a big run, like “My Fair Lady,” meant the opposite: Tips would be down for a while.

“We were dependent on how well shows were doing at Lincoln Center, and we really did pay attention,” said Emma Craig, who was a server at the Atlantic Grill a block away before the coronavirus crisis. She has not returned to that job yet, or to another singing at a private supper club downtown. In both jobs, she said, “I am dependent on the trickle down.”

The recession has crushed this kind of work in particular: service jobs that depend directly on the spending — and the whims — of the well-off. 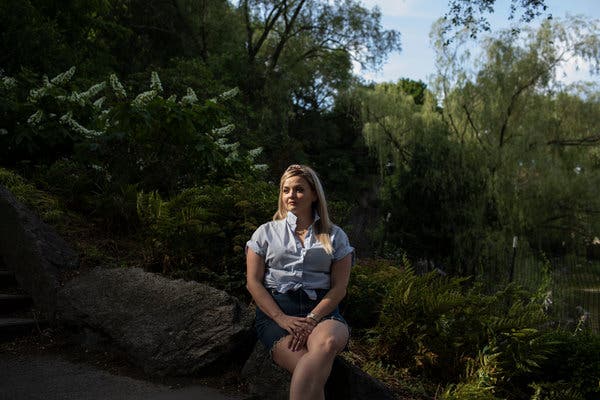 Emma Craig is a server in a Manhattan restaurant and a singer at a downtown supper club. Both jobs mean that “I am dependent on the trickle down,” she said.Credit…Benjamin Norman for The New York Times

Economists at the Harvard-based research group Opportunity Insights estimate that the highest-earning quarter of Americans has been responsible for about half of the decline in consumption during this recession. And that has wreaked havoc on the lower-wage service workers on the other end of many of their transactions, the researchers say.

“One of the things this crisis has made salient is how interdependent our health was,” said Michael Stepner, an economist at the University of Toronto. “We’re seeing the mirror of that on the economic side.”

As income inequality has grown in America, so has inequality in consumption. That means that when the rich spend money, they drive more of the economy than they did 50 years ago. And more workers depend on them.

Put another way, this particular economic shock — one that has halted much in-person spending, even by rich people who never lost their jobs — has been devastating for an economy in which many low-wage workers count on high-income people spending money.

Mr. Stepner and the economists Raj Chetty, Nathaniel Hendren and John Friedman have collected data from credit card processors, payroll firms and other private companies tracking how and where people spend their money, and how businesses and their workers have been affected as a result. By tying debit and credit card spending back to the home ZIP codes of millions of anonymized cardholders, they estimate that households in the bottom quarter of ZIP codes by income cut their spending by about 30 percent from pre-coronavirus levels at the lowest point in late March. Now, with the help of government stimulus, low-income spending is down only about 5 percent.

For the highest-income quarter, spending has recovered much more slowly, after falling by 36 percent at the lowest point.

“It’s not just that it’s somewhat bigger in percentage terms,” Mr. Chetty said of shifts by the rich. “In absolute dollars, that’s like half of the game.”

The researchers point to several curious patterns tied to that fact: Unemployment claims have been high in rich counties that were largely immune to the last recession. And lower-income Americans living in those richer counties have been hit particularly hard. Their spending fell further than the spending of lower-income workers in poorer counties.

Change in small business revenue during the pandemic 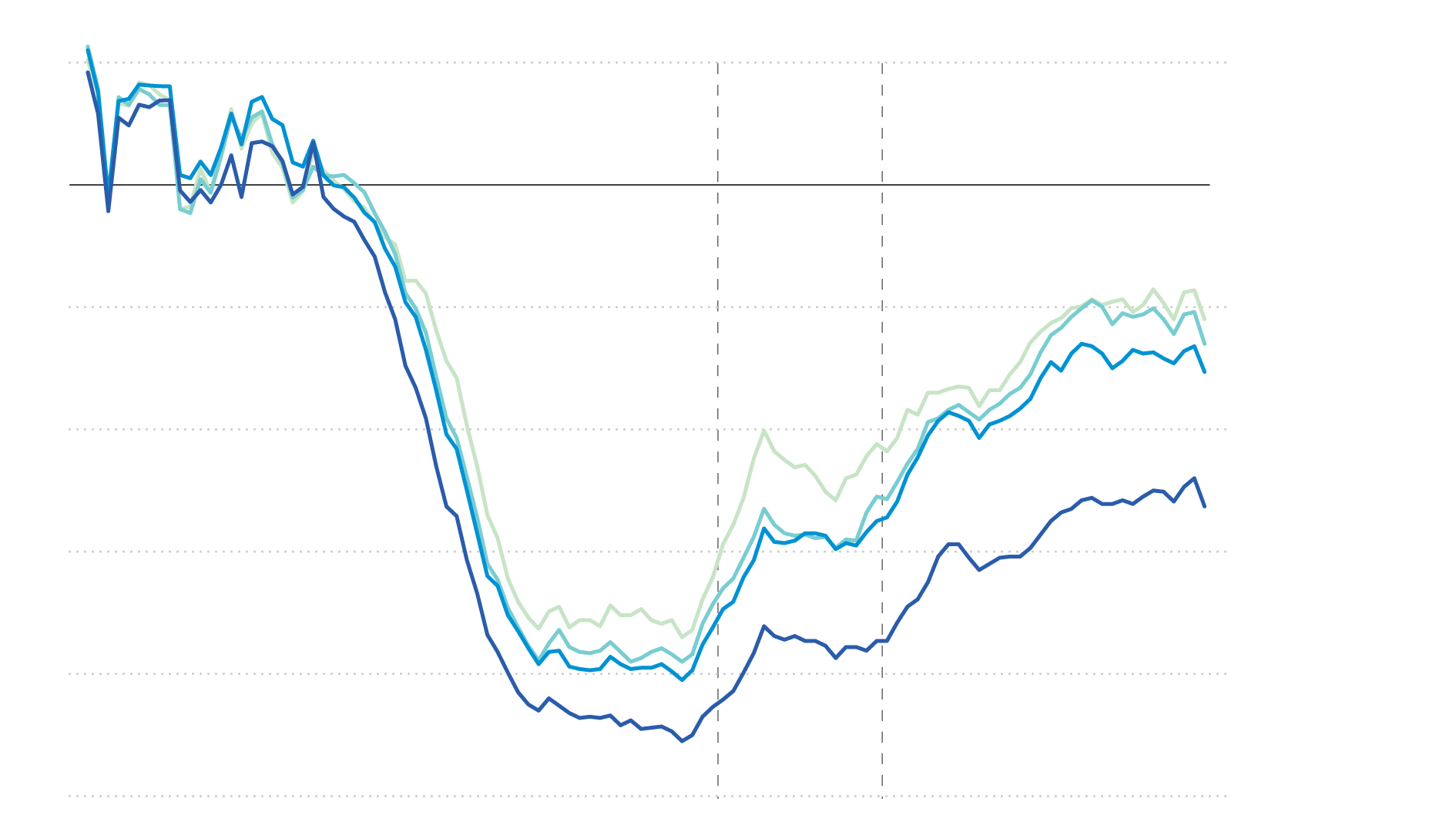 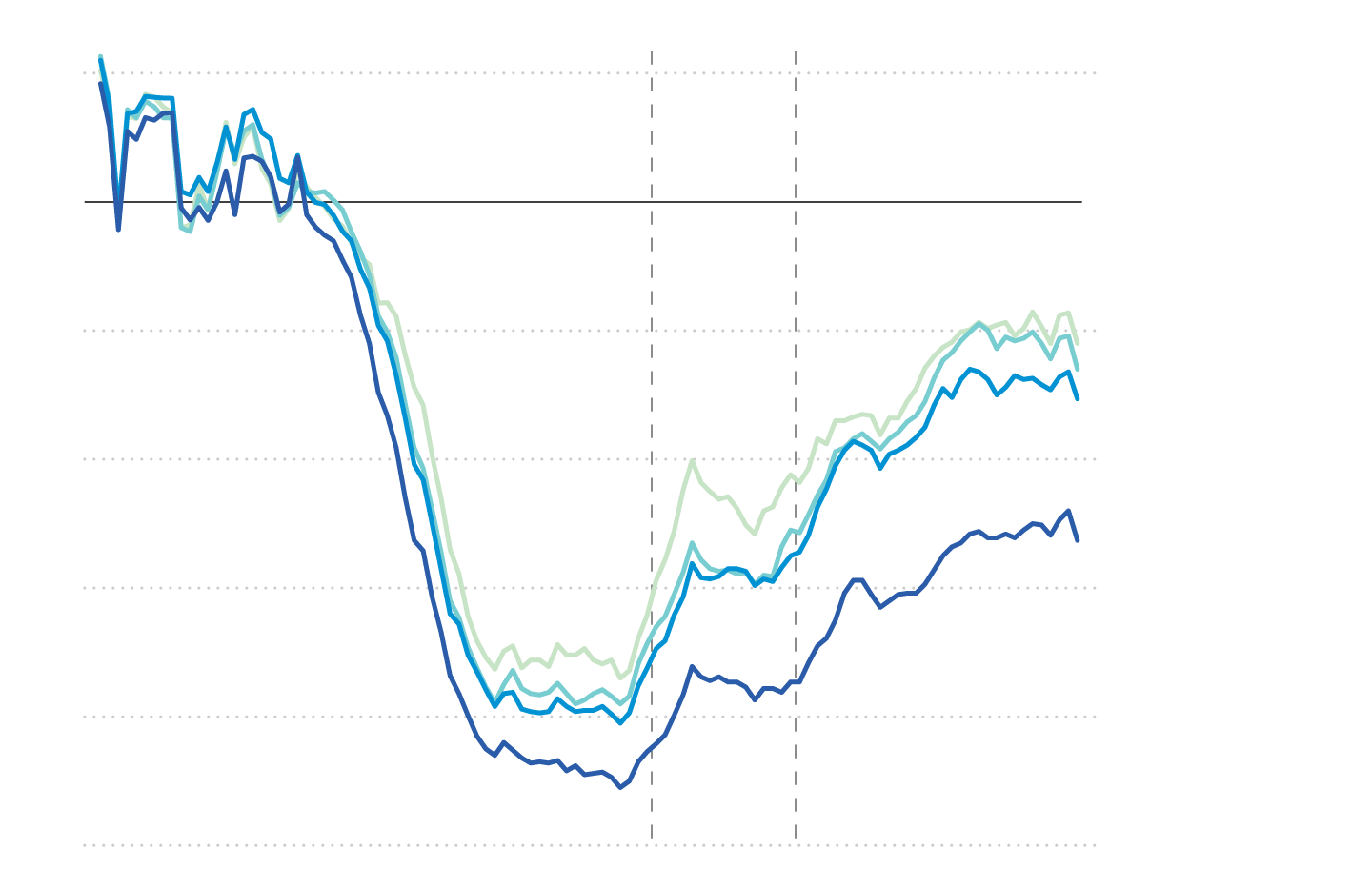 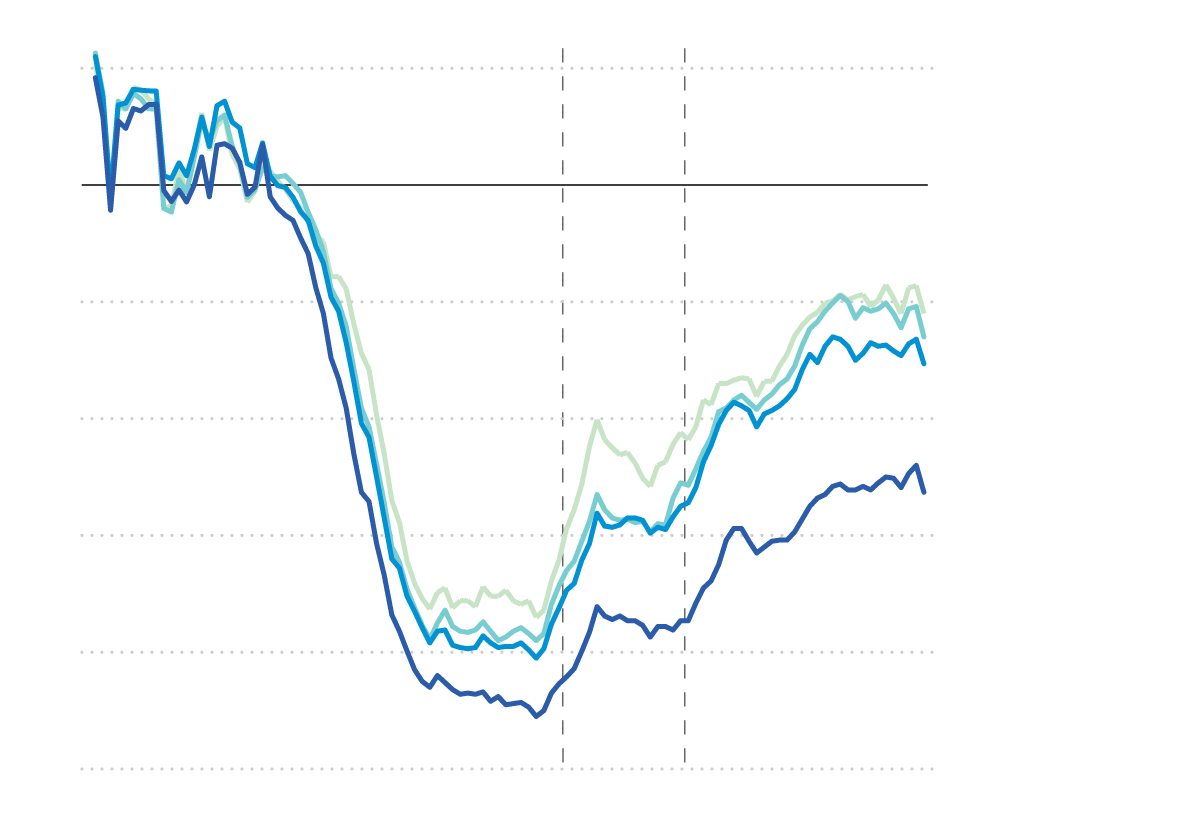 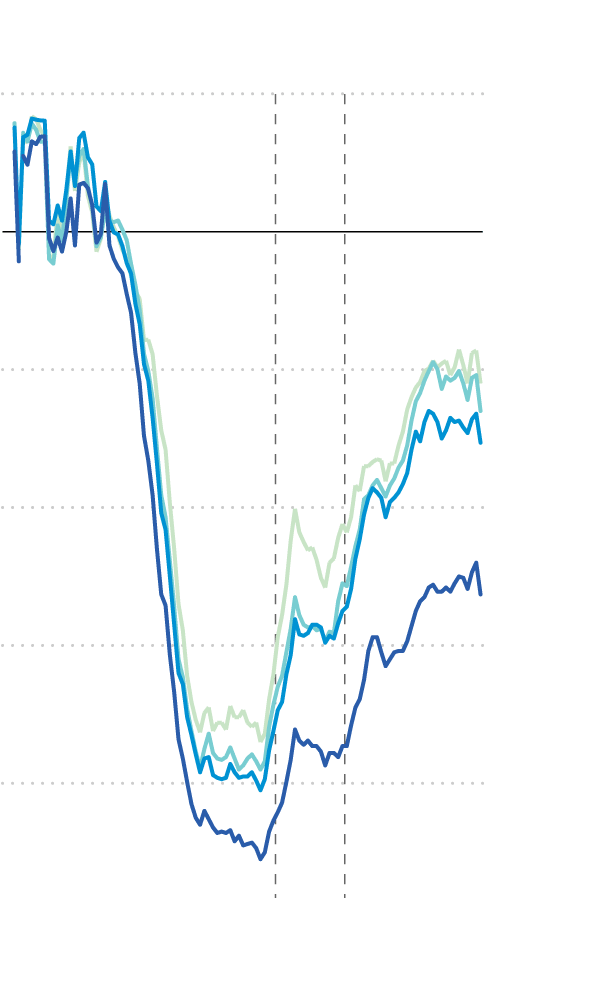 Note: Change is calculated from seasonally adjusted January average. Income groups are based on the median income in the ZIP codes where the transactions occurred.·Source: Analysis of credit card transaction data from Womply by Opportunity Insights

At the ZIP code level for small businesses, the steepest declines in revenues and hours worked have been in the highest-income neighborhoods. That’s a pattern that can’t fully be explained by differences in coronavirus cases.

In the ZIP code where Ms. Craig worked, near Lincoln Center, small-business revenue fell by 72 percent at the lowest point. It’s still down by half.

In past recessions, the service sector has been one of the most resilient parts of the economy. In down times, consumers typically cut back on big durable goods, like a new washing machine or an upgraded car. But while you can drive your car a little longer, you may not be able to stretch out your next trip to the dry cleaners for a year or two.

The restaurant industry has even been the place where laid-off workers in other parts of the economy have found work in the past.

So we have never seen anything that looks quite like this service-sector recession — one where the bartenders lost their jobs before the construction workers, where previously thriving restaurants and salons have experienced the steepest losses.

Spending on services, often steady during recessions, has fallen sharply 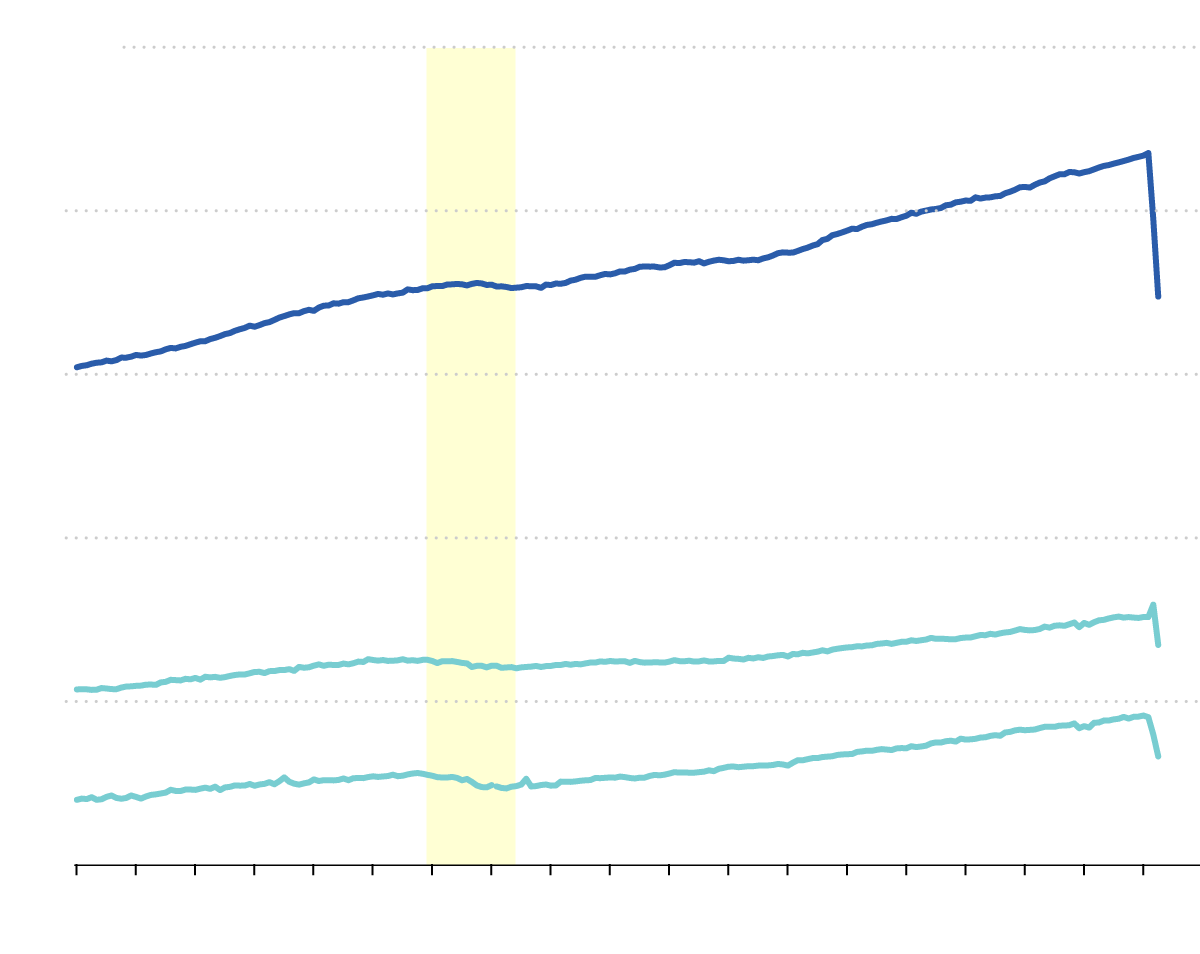 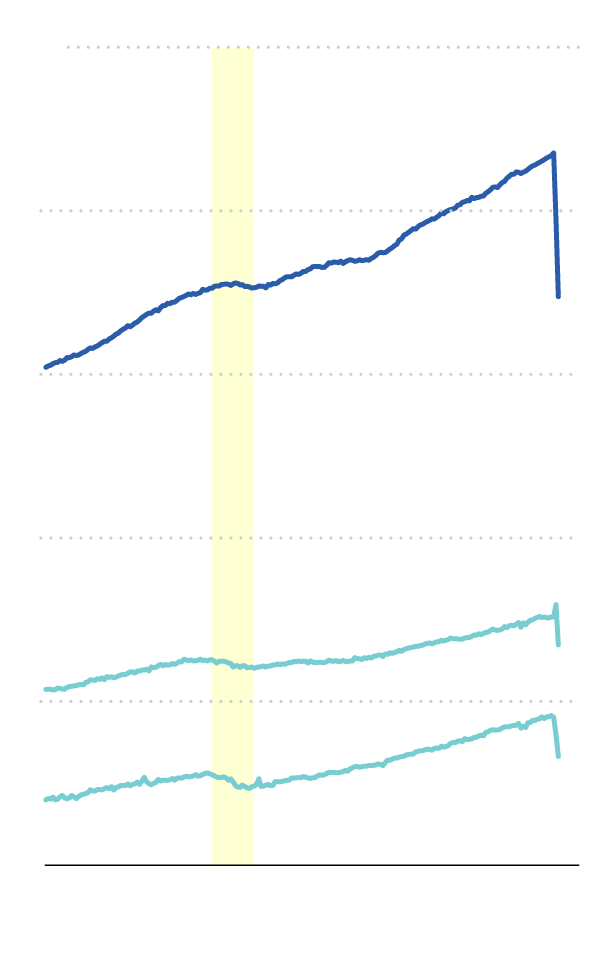 The service sector had also been expanding over time, replacing blue-collar jobs in manufacturing that were more stable and paid more. Especially in big, expensive cities, the vast service sector is now the place where the rich and the poor meet.

“What we’ve seen with rising inequality of the last few decades is that more and more modest-income individuals survive because they’re serving where the consumption has been,” said Lawrence Katz, an economist at Harvard, who has reviewed his colleagues’ findings. And that consumption, he added, has been in the hands of households at the top.

If we’d had this same kind of economic shock 50 years ago, Mr. Katz said, the magnitude of the ripple effects from the rich to the poor would have been much smaller. There simply weren’t as many links between them. (Fifty years ago, the rich also couldn’t have counted on working from home, keeping their incomes intact.)

Change in employment of low-wage workers during the pandemic 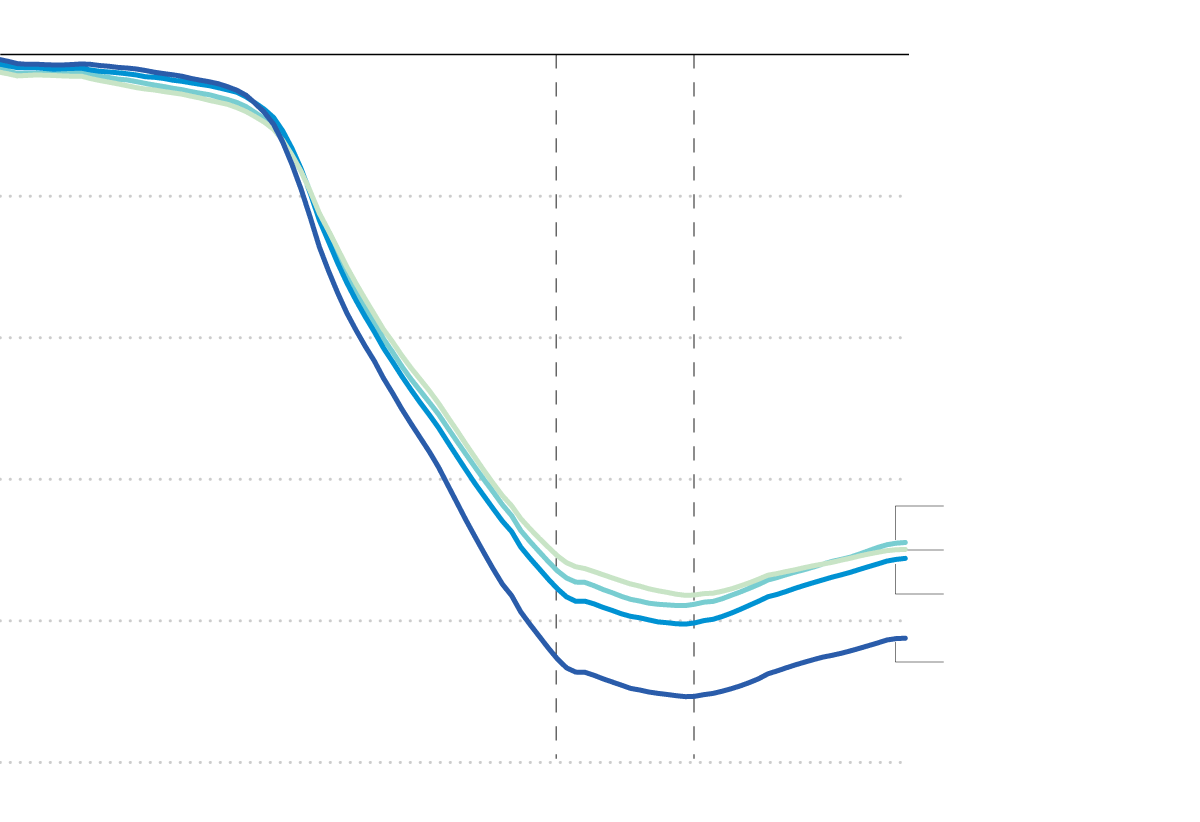 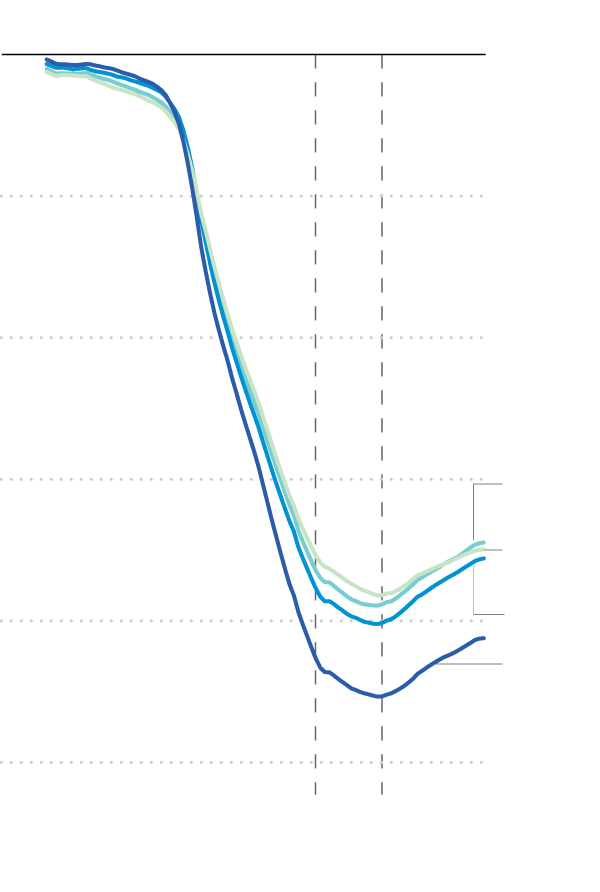 Note: Change calculated from January average. Income groups are based on the median income in the ZIP codes where the workplaces are located. The median annual income of the workers in the data sample is approximately $25,000.·Source: Analysis of payroll data from Earnin and timecard data from Homebase by Opportunity Insights

Now, cities like Washington that were relatively unscathed by the Great Recession — thanks to their high median incomes and all their service jobs — stand to be hurt far more deeply in the coronavirus recession. Initial unemployment data bears this out.

Through April, Washington lost 10 percent of its jobs. During the Great Recession, the city increased employment by 3 percent.

San Francisco and San Mateo counties have lost 16 percent of their jobs during the pandemic, roughly in line with job losses nationwide. During the previous recession, those counties gained jobs while employment in the rest of the country fell 3 percent over all and nearly 5 percent in the poorest counties. Unemployment was even more uneven in the 2001 and 1991 recessions, with steeper job losses in poorer counties.

In other words, in good times — or even in more typical downturns — proximity to the rich affords lower-wage workers a higher degree of job security. In this peculiar coronavirus moment, that arrangement appears remarkably precarious, particularly for women and black and Hispanic workers disproportionately employed in the service sector.

“It’s completely a house of cards,” said Ai-jen Poo, the executive director of the National Domestic Workers Alliance. “So much of our essential work force that keeps us safe and literally has kept this country from collapsing are poverty-wage jobs that were completely invisible to most people before the pandemic.”

In the restaurant industry, the thread connecting the rich and the poor is clearer. Higher-income diners hand servers their primary income.

These workers have learned to be familiar with the rhythms of rich consumption. Bad weather — too hot, too cold, too rainy — means fewer tips. January and February, after the glut of holiday spending, bring fewer hours and less money. For hotel workers, incomes are tied to convention season. For bartenders, it may be the theater calendar.

Waiting for the rich to spend again

In recent weeks, spending by the poor has nearly rebounded to pre-crisis levels, thanks to federal stimulus checks — low-income consumption shot up after April 15 the moment they were deposited — and to expanded unemployment benefits. But the jobless rate remains at its highest level since the Great Depression. High-income spending has been much slower to return. Some consumption has also shifted online, which doesn’t help local businesses.

For Washington policymakers, it is hard to coax more spending out of people wary of leaving their homes, and to steer that spending to the businesses and workers affected most.

“If the underlying problem is that people are afraid of interacting in close proximity, and they’re afraid to go shopping in certain ways, then the only way to get things back to normal is going to be to solve the public health problem,” said Mr. Friedman, an economist at Brown and a researcher on the project.

That may mean expanding the safety net for low-wage workers, the researchers suggest, to help them survive until that moment comes.

Patricia Namyalo, a restaurant worker in Washington, has been furloughed because of the pandemic. “I know how this industry operates,” she said. “I’m not expecting much. I see a lot of doom ahead.”Credit…Justin T. Gellerson for The New York Times

Patricia Namyalo, a server in a hotel restaurant on Capitol Hill in Washington, is gloomy about what’s ahead. She recalls when business began to dwindle in early March, before the city’s shutdown went into effect, and well before members of Congress, who sometimes dine at the hotel, recessed for the crisis.

“There were days when we went to work and had a total of eight tables come in for brunch,” said Ms. Namyalo, a 38-year-old immigrant from Uganda. “And that’s supposed to be shared among four people.”

No one wanted to go home because they were guaranteed $11 an hour in her unionized hotel, and they had to keep those hours in an empty restaurant to make up for lost tips. In retrospect, Ms. Namyalo believes her customers knew what was coming. They were following the news from Asia, the headlines out of Europe.

“The upper class was already aware that America was going to follow suit,” she said. “And people like myself — I didn’t quite get it at the time.”

She suspects the same is true now. Higher-income consumers know they won’t be back to their old levels of dining out or spending any time soon, even with all the talk of cities reopening. Meanwhile, lower-wage workers wait, hoping for the call back to work.

For 20 Years, His Firm Called Him Antoine. Now Mohamed Is Suing.

PARIS — Mohamed Amghar was a 40-year-old software salesman in the final stages of interviewing for a new job in...

At a Time of Financial Stress, 401(k) Fees Matter More Than Ever

John C. Bogle, founder of the Vanguard Group, had a mantra throughout his long career in the mutual fund industry:...