Trump Administration to Push for ‘Reset’ of Global Tariffs 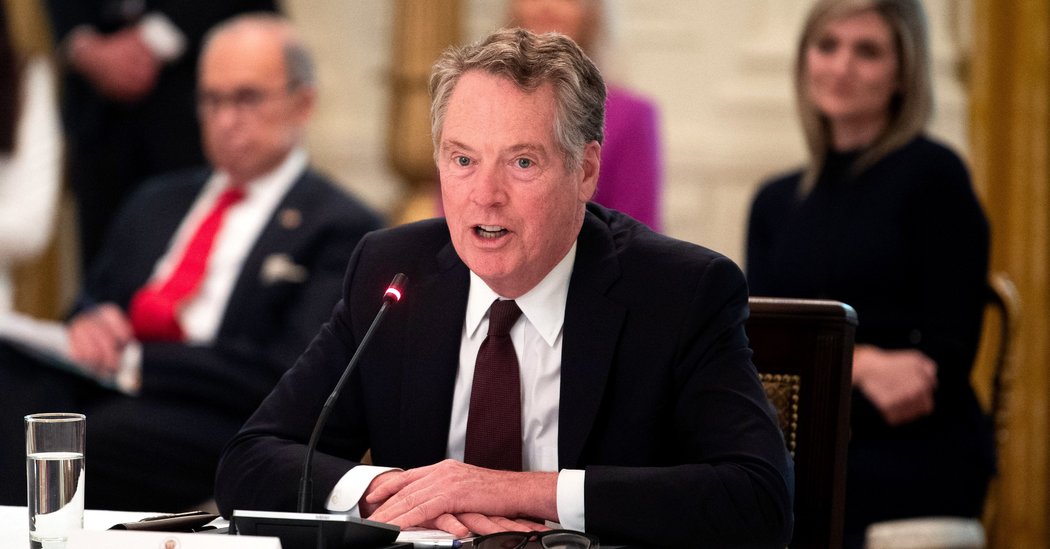 WASHINGTON — The Trump administration plans to continue its aggressive trade tactics this year by pushing for a “broader reset” of the tariffs set at the World Trade Organization, a top trade official plans to tell Congress in testimony on Wednesday.

Robert E. Lighthizer, the U.S. trade representative, will tell the House Ways and Means Committee that the tariffs the organization sets for various countries are “outdated” and far above the levels charged by the United States, according to a copy of his prepared remarks.

The remarks suggest that American officials will continue their offensive this year on the World Trade Organization, the international body charged with writing and enforcing trade rules.

The international trading system was largely built by the United States, but the Trump administration argues that its rules have put Americans at a disadvantage, preventing the United States from taking actions to protect its workers while doing little to curb unfair trade practices by China and other nations. The United States wants to change the organization’s rules, efforts that critics say have crippled it and edged it into further irrelevance.

Mr. Lighthizer is expected to deliver his remarks, along with a review of the administration’s recent trade accomplishments, to the House committee in the morning and then testify before the Senate Finance Committee in the afternoon.

Mr. Lighthizer will also commend the Trump administration’s trade and economic policies for spurring growth in wages and manufacturing jobs and creating a “blue-collar boom,” the document says.

“This year, President Trump will continue to pursue new trade agreements that benefit all Americans, aggressively enforce our trade laws, respond to unfair trade practices by other nations and work toward reform at the World Trade Organization,” the prepared testimony reads.

The Trump administration also intends to pursue “formal challenges” this year to unfair trade practices by other countries, potentially including a number of countries that are adopting new taxes on digital commerce, and look for other ways to strengthen American trade policies to protect producers and consumers, according to the testimony.

One option the administration is considering, Mr. Lighthizer will say, is lowering the “de minimis threshold,” the dollar value up to which products can be shipped into the United States duty-free and with minimal screening.

The threshold, now $800, is significantly higher than it is for many U.S. trading partners, a system that benefits large importers like eBay and Amazon but exposes American manufacturers to more competition from abroad. Trump administration officials have argued that this system fails to protect American companies against competition from Chinese companies, which can ship many products into the United States duty-free.

But the testimony suggests that Mr. Lighthizer’s most critical remarks will be reserved for the World Trade Organization, which has been increasingly sidelined as the Trump administration pursues negotiations with other countries one on one.

The organization has treated the United States “as the world’s greatest trade abuser” and “created new obligations out of thin air, preventing the United States from taking action to address unfair trade practices that hurt U.S. workers, and usurping the U.S. government’s accountability to the American people,” Mr. Lighthizer’s testimony reads.

Unlike other officials in the Trump administration, including, at times, Mr. Trump, Mr. Lighthizer does not advocate withdrawing from the group entirely. But under his direction, the United States has crippled the arm of the organization charged with settling trade disputes by blocking appointments to fill its seats. Mr. Lighthizer frequently sparred with that part of the organization earlier in his career as a lawyer defending the American steel industry.

Mr. Lighthizer’s prepared remarks suggest that the United States is likely to put more pressure on the trade organization this year to adjust the tariffs it allows countries to charge one another on a variety of products, potentially bringing the United States into conflict with governments that support the organization, including the European Union.

Some members of the World Trade Organization have higher tariffs than the United States, while others have lower tariffs, the result of negotiations that Americans have led with dozens of countries over the last 70 years, said Chad Bown, a senior fellow at the Peterson Institute who was previously a visiting scholar at the trade organization. But some Trump administration officials believe this complex system should be wiped away so all the tariffs the United States charges its trading partners can be set at the same “reciprocal” level it pays them.

“Historically, Americans have been successful at getting other countries to lower their tariffs when willing to offer something reciprocal in return,” Mr. Bown said. But the Trump administration “has shown it has little interest in taking that on.”