Elected officials in a sleepy town on California’s Mendocino Coast named after a Confederate general and slave owner is asking its residents to weigh in on whether it should change its name amid the nationwide reckoning over racial injustice following the death of George Floyd.

The city council in Fort Bragg, Calif., posed the question of changing its name in a Facebook post late last week after receiving a deluge of requests to abandon the moniker given in honor of Confederate Gen. Braxton Bragg.

“Responding to many requests (some local and many not) that the City of Fort Bragg, California change its name to avoid any connotation associated with Confederate Army General Braxton Bragg,” the Facebook post stated. “Fort Bragg Mayor Will Lee would like to announce that at the June 22, 2020 Regular City Council meeting, the City Council will discuss whether to place the question of changing the City’s name on the ballot in November for City residents to decide.”

The town got its name in 1857 when U.S. Army 1st Lt. Horatio G. Gibson, then serving at the Presidio of San Francisco, established a military outpost in the region and named it after his former commanding officer. Bragg served in the U.S. Army during the Second Seminole War and Mexican–American War before becoming a Confederate general during the Civil War.

Bragg – who is considered by many historians to be one of the worst generals in the Civil War whose losses greatly contributed to the Confederacy’s ultimate demise — also was the owner of a plantation in Louisiana where he kept slaves. His plantation was seized following the war and used to house freed slaves. He floundered through the rest of his life – working a series of jobs from selling insurance to working as a railroad engineer – before dying at the age of 59 in Texas. 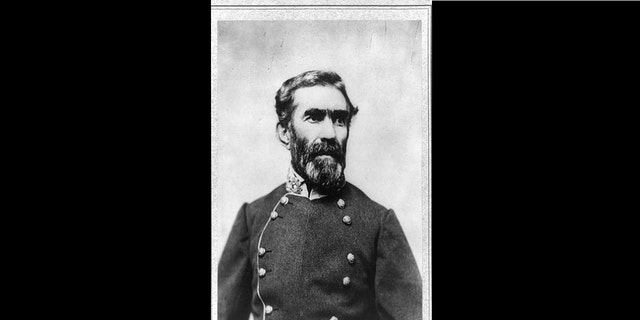 A photo of Confederate Gen. Braxton Bragg. (Library of Congress)

The more than 900 comments on the Facebook post range for support for changing the town’s name to those defending keeping it and to “stop trying to erase our history.” A similar controversy has embroiled the military base in North Carolina of the same name, with President Trump coming out against changing the names of military posts named after Confederate officers.

“These Monumental and very Powerful Bases have become part of a Great American Heritage, and a history of Winning, Victory, and Freedom,” Trump tweeted. “Therefore, my Administration will not even consider the renaming of these Magnificent and Fabled Military Installations. Our history as the Greatest Nation in the World will not be tampered with. Respect our Military!”

Along with Fort Bragg, there are at least 10 Army installations that are named after Confederate military commanders, including Fort Hood in Texas and Fort Benning in Georgia. Previous calls to rename them have been dismissed on the grounds that doing so would go against tradition, but U.S. Army Secretary Ryan McCarthy recently said he is open to the idea.

A senior Army official told Fox News last week that McCarthy did not plan to change the names unilaterally, but instead will seek bipartisan support to do so.

“We must recognize history is important, but we must come together and have some sort of open discussion about race,” the official said, adding: “This week highlighted the need to start understanding those feelings, and the Army secretary is open to considering changing the names of these bases named for Confederate generals.”

You’ve heard of defund the police. Now, defund the Confederates. Congressional Democrats are on the march against Confederate symbolism inside...