Debate about offensive symbols, icons on Capitol Hill sprawls far beyond the Confederates

You probably don’t know much about Wade Hampton.

The same with James Zachariah George.

But you have probably heard a lot about Robert E. Lee, Jefferson Davis and a host of other Confederate figures whose depictions are spread about the U.S. Capitol.

They always start with the big names every time there’s a conversation about removing Confederate statues on Capitol Hill.

THESE ARE THE ARMY BASES NAMED FOR CONFEDERATES

These four statues are positioned in prominent locations in the Capitol. Lee used to occupy a prodigious spot in Statuary Hall, the old House chamber and close to the current House chamber. House Speaker Nancy Pelosi, D-Calif., saw to it that Lee was relegated to a slightly less eminent location during her first term as Speaker, the Capitol Crypt. To the lay person, the “Crypt” sounds like a dark, musty cell accessorized with cobwebs. It’s not. The Crypt is one level below the Capitol Rotunda on the first floor. It’s a major locale in the U.S. Capitol and subject to substantial foot traffic when the House and Senate are in session – if the world isn’t plunged into the throes of a pandemic. It’s a primary artery for House and Senate members and aides to traverse the Capitol. Tour groups also linger extensively in the Crypt – when there are such things as tours of the U.S. Capitol. 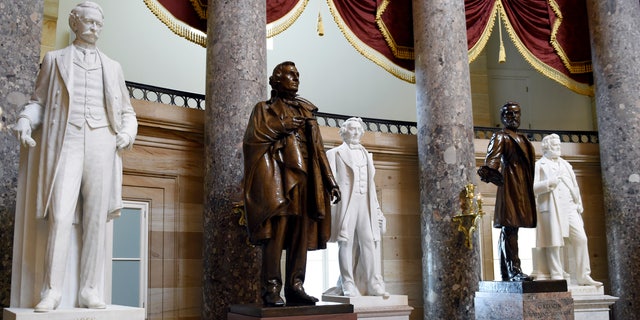 FILE – In this June 24, 2015 file photo, a statue of Jefferson Davis, second from left, president of the Confederate States from 1861 to 1865, is on display in Statuary Hall on Capitol Hill in Washington. House Speaker Nancy Pelosi is demanding that statues of Confederate figures such as Jefferson Davis be removed from the U.S. Capitol. (AP Photo/Susan Walsh, File)

Meantime, the statues of Lee, Stevens and Wheeler remain upstairs in Statuary Hall, a distinguished location as any in the Capitol complex.

That’s why we don’t think a lot about Wade Hampton, James Zachariah George and Edward Kirby Smith compared to the others. But they all harbored significant Confederate pedigrees. Hampton served as South Carolina’s governor and U.S. senator. He was also a General in the Confederate Army and sympathized with the Ku Klux Klan. George of Mississippi was a Confederate Colonel. Smith was a Confederate General.

Philonise Floyd, the brother of George Floyd, came to Capitol Hill last week to testify about police abuse before the House Judiciary Committee. The Judiciary panel would usually conduct such hearings in its main hearing room in the Rayburn House Office Building. But those digs are now too cramped in the era of COVID-19. So the Judiciary Committee decamped to the much larger Congressional Auditorium in the subterranean Capitol Visitor’s Center (CVC). When Philonise Floyd arrived, he walked into the auditorium right past the statues of Hampton, George and Smith.

This is where Congressional officials banished the statues of Hampton, George and Smith when the CVC opened in late 2008. The Congressional Auditorium is a grand space. But it’s rarely used – although that could change in the era of social distancing. The statues of George and Smith used to occupy more distinguished real estate in the Capitol. Both were in the Hall of Columns, near the main entrance on the east side of the building. Now all are buried, truly in the basement.

In fact, the statue of Smith will soon be exiled. Florida has approved a statue swap, sending Mary McLeod Bethune. She founded the National Council for Negro Women and the National Negro College Fund. She’s the partial namesake of Bethune-Cookman University in Daytona Beach, FL.

Lawmakers often note that states pick which statues they send to the Capitol. Each state gets two. But completely removing the statues could present a problem, especially if it’s against the will of a state. But, it’s possible the House and Senate could simply “hide” controversial statues.

“The Architect of the Capitol, upon the approval of the Joint Committee on the Library and with the advice of the Commission of Fine Arts as requested, is authorized and directed to relocate within the United States Capitol any of the statues received from the States under section 2131 of this title prior to December 21, 2000, and to provide for the reception, location, and relocation of the statues received on and after December 21, 2000, from the States under such section.”

In short, the law gives Congress discretion where to place a statue – be it in the Capitol Rotunda or consigned to a broom closet.

As for moving statues, Pelosi said she “did do what I had the authority to do” during her first go-around as Speaker, dispatching Lee’s statue to the Crypt.

Pelosi hopes Rep. Zoe Lofgren, D-Calif., and Sen. Roy Blunt, R-Mo., lead the Joint Committee on the Library, can forge an arrangement with Architect of the Capitol Brett Blanton to remove the Confederate statuary.

But the debate about offensive and questionable symbols and icons populating Capitol Hill sprawls far beyond the Confederates.

The statue of the late Sen. Pat McCarran, D-Nev., sits in the Hall of Columns. McCarran was instrumental in developing the modern Air Force. You fly into McCarran International Airport if you travel to Las Vegas. But McCarran was known as a race baiter who thought the U.S. would be “perverted, contaminated or destroyed” by what the senator regarded as “aliens.”

Emblems of state quarters now decorate the tunnel which stretches between the Capitol and the Rayburn House Office Building. But a few years ago, the flags of all 50 states hung in the tunnel. That included Mississippi’s flag. Ensconced in the upper left-hand corner of the flag is the deep blue cross against a red backdrop. It’s the Confederate flag, incorporated into Mississippi’s banner.

In 2015, Rep. Bennie Thompson, D-Miss., authored a resolution to “remove any State flag containing any portion of the Confederate battle flag” from the House side of the Capitol. Republicans, in the majority at the time, sidetracked the resolution. House Republicans didn’t want to approve such a prohibition. But what Republicans really didn’t want to do was vote against Thompson’s plan. So the House tabled the issue altogether.

Congressional workers removed all flags from the tunnel in 2015 and 2016 for a maintenance project. But the flags were mothballed in favor of anodyne depictions of state quarters.

Questions sometimes arise at the Capitol as to whether it is appropriate for the Senate to name rooms after the late Sen. Strom Thurmond, R-S.C., and the late Senate Majority Leader Robert Byrd, D-W.Va.

The Thurmond room is an acoustically-challenged meeting space near the suite held by Senate Majority Leader Mitch McConnell, R-Ky. The Kentucky Republican often herds GOPers into the room for short meetings before votes or councils with committee chairs. The Byrd rooms represent the permanent office suite for the Senate Democratic Leader, be the party in the majority or minority. It’s located off the Senate floor and currently occupied by Senate Minority Leader Chuck Schumer, D-N.Y.

Thurmond ran for President in 1948 on the Dixiecrat ticket, favoring “state’s rights” and segregation. Thurmond collected 39 electoral votes. He also opposed the Civil Rights Act. To this day, Thurmond maintains the record for the longest, continuous, “speaking” filibuster. Thurmond held the floor for 24 hours and 18 minutes, in August, 1957, blocking a civil rights measure. The senator later modified some of his stances on civil rights over time.

Byrd rose to the level of Exalted Cyclops in the Ku Klux Klan in the 1940s. He later denounced the Klan, dropping his membership long before running for the House in 1952. The West Virginia Democrat later called his association with the KKK “the greatest mistake I ever made.”

And then there is the Russell Senate Office Building, named after the late Sen. Richard Russell, D-Ga.

Schumer pushed to rename the structure which houses 35 offices of U.S. senators after the late Sen. John McCain, R-Ariz., in the summer of 2018. Russell never served as Majority or Minority Leader. Still, Russell was one of the most influential figures to ever toil in the Senate. However, Russell was also a segregationist who blocked civil rights bills and measures outlawing lynchings. 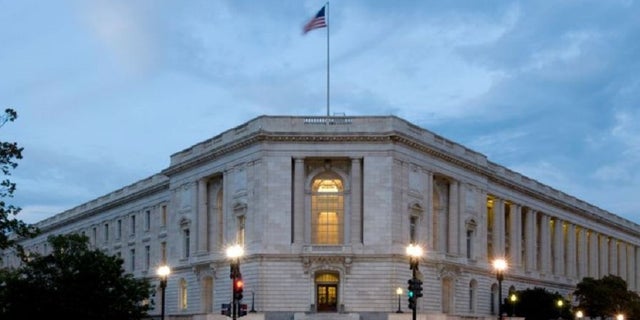 The Russell Senate Office Building in Washington D.C.  (Architect of the Capitol)

The Senate could change the names of any of the rooms or the Russell Senate Office Building by adopting a resolution. But nothing’s on the table. There’s bicameral legislation to yank out the 11 statues sprinkled across the Capitol complex of Confederate figures.

There have been various fits and starts over the years to eliminate some of the most-controversial art and statuary which adorns the U.S. Capitol. But little changes. What’s unclear is if this debate will continue to focus on the Confederate statues – or morph into renaming other entities around the Capitol complex. And even if it does, it’s far from clear if lawmakers will take action.

Atlanta Mayor Keisha Lance Bottoms announced Monday she tested positive for COVID-19. The mayor said in a tweet she has...

Chicago Mayor Lori Lightfoot cited the coronavirus pandemic as a contributing factor to a recent spike in shootings in her...