MINNEAPOLIS — Scorn for the brown brick corner store keeps pouring in: “They call the cops on black people,” one person says in an online business review. “Racially profiled a man.” “Disgusting.”

The outrage is aimed at Cup Foods, a neighborhood market in South Minneapolis where a teenage clerk called 911 to report that George Floyd had bought cigarettes using a fake $20 bill. Mr. Floyd was sitting in a parked car just outside the store when a white police officer responding to the call pinned Mr. Floyd’s neck to the asphalt for nearly nine minutes.

“People were saying we were responsible for his death, that we had blood on our hands, that we’re the reason he died,” said Mahmoud Abumayyaleh, an owner of the market.

Now, Cup Foods has become indelibly connected to the police killing of a black man that set off weeks of protests and a national reckoning over racism in policing and in many other parts of American life.

On Monday, Cup Foods reopened its doors for the first time since protesters poured into the neighborhood. The deli was again stocked with fresh vegetables and meat, but the newspapers on the rack were precisely three weeks old — the last editions before Mr. Floyd’s death began to dominate every front page.

The air inside was still and customers were scarce in the morning. A newly hired security guard paced in and out of the building. Inside, signs commemorated Mr. Floyd and declared that “Getting arrested shouldn’t be a death sentence.”

In the weeks since Mr. Floyd’s killing on May 25, mourners have sought to transform the pavement and sidewalks outside the store into hallowed ground. They have left hundreds of bouquets, hung banners and signs and painted a mural of his face on the store’s exterior walls.

The vigils and protests echo scenes from the Triple S Food Mart in Baton Rouge, La., where the police killed Alton Sterling in 2016, and the Ferguson Market and Liquor in Missouri, where a report of a “stealing in progress” precipitated the police killing of Michael Brown in 2014. Over the weekend in Atlanta, protesters burned down the Wendy’s where a white police officer had shot and killed Rayshard Brooks, a black man who had aimed a Taser at an officer while running away.

For more than 30 years, Cup Foods has been a neighborhood mainstay but also a source of complaints at the corner of Chicago Avenue and 38th Street in South Minneapolis.

“Cup Foods is the hub,” said Rashad West, the owner of Dragon Wok, a restaurant across the street whose surveillance video captured part of Mr. Floyd’s arrest. “This is like their block.”

It is a lifeline where customers, Mr. Floyd among them, bought cigarettes, fresh produce and more minutes for their cellphones. Neighbors said they swung by to pick up cilantro and limes for tacos, and adults remember spending childhood hours playing the Street Fighter II arcade game there. Mr. Abumayyaleh said his family was on a first-name basis with many customers.

But it is also a place where shootings have erupted nearby and undercover officers have surveilled patrons. Amid reports of rising crime more than 20 years ago, the Police Department urged the store to call 911 on people loitering outside. In the 1990s, the police reported spotting a series of drug sales around the store, and the Minneapolis City Council tried at one point in 2000 to revoke Cup Foods’s business licenses.

As the neighborhood began to gentrify and barbershops and clothing stores closed as a cafe and art spaces moved in, Cup Foods — the name originally stood for “Chicago Unbeatable Prices” — did not budge.

Mr. Floyd’s apartment in the suburb of St. Louis Park was about a 20-minute drive from Cup Foods, but he often visited the store to buy cellphone credits at the market’s MetroPCS counter. Eric Hardin, a friend, said Mr. Floyd knew many of the store’s employees.

“He’d been going there for years,” said Mr. Hardin, who called Mr. Floyd by a nickname Slim. “Any problems with his phone he would take it to them and get a resolution. Slim was comfortable with those people.” 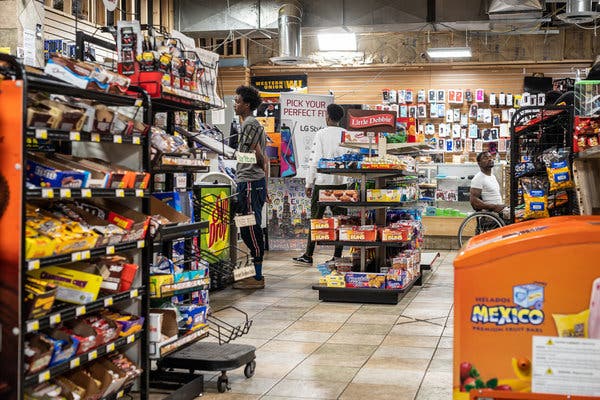 In an interview, Mr. Abumayyaleh provided new details of the moments before Mr. Floyd’s fatal encounter with four Minneapolis Police officers, saying that another man had tried to use a fake $20 bill minutes before Mr. Floyd walked into the store.

The first man handed the bill to an older employee who had worked at the shop for several years and used a special marker to determine that the bill was counterfeit, Mr. Abumayyaleh said. The employee refused the sale and handed the bill back to the man, who left.

A few minutes later, Mr. Floyd walked in and gave a $20 bill to a teenage clerk, who did not immediately recognize the bill as fake. After a machine scan determined that the bill was counterfeit, the young clerk followed Mr. Floyd outside, asking him to return the items he had bought, but he refused, according to a transcript of the clerk’s call to 911.

“He’s only been in the States for about a year,” Mr. Abumayyaleh said of the teenage clerk, who is no longer working at the store. “It’s his first time probably ever calling the police.”

Mr. Abumayyaleh, who is Palestinian-American and has spent all of his 35 years in Minneapolis, said he had left the store about three hours before the killing. It had been a busy day, like most Mondays, Mr. Abumayyaleh recalled, but he was used to that. The store had always been in his family, and by age 10, he was helping out behind the counter. By 15, he was working there full time.

That night, just after 8 p.m., an employee called Mr. Abumayyaleh, crying and screaming, saying, “they’re killing him,” he recalled. He said he told the employee to record the scene and “to call the police on the police.”

Since then, Mr. Abumayyaleh said, he has been bombarded with hateful messages. He asked a member of a local violence prevention group to serve as a spokesman and issued a public statement condemning Mr. Floyd’s killing and saying that the store supported the protesters and shared their rage.

Things have been even worse for the teenage clerk, Mr. Abumayyaleh said, describing the aftermath as “a nightmare.” He also said that Cup Foods has been rethinking when its workers should call the police. Mr. Abumayyaleh said they will now only call 911 to report violence.

Mr. Floyd’s death was not the first time that Cup Foods has been drawn into a killing that drew national scrutiny.

When a 17-year-old boy went on trial for the 2002 killing of an 11-year-old girl, he insisted he was at Cup Foods and not at the scene of the crime. Senator Amy Klobuchar was the district attorney in Hennepin County who oversaw the first prosecution of the teenager, Myon Burrell, and an investigation by The Associated Press raised serious questions about the verdict and shadowed her presidential campaign.

Investigators never followed up with two people whom Mr. Burrell said he was with at Cup Foods during or following the shooting. Both told The A.P. they were with him.

Since the killing of Mr. Floyd, several residents have said they support the store and its owners. On Monday, Kendrick White, 26, arrived at the store to connect with some friends, something he has done for years.

“You see brothers, sisters, cousins, people from the neighborhood,” Mr. White said. “There are people who grew up here who have been coming here their whole lives.”

But everything had changed. The streets were barricaded off, and many nearby businesses were still closed. Visitors snapped photos as they wandered around the memorials and wilting flowers.

“We respect the fight, but it’s emotionally draining for those of us who have been in the heart of it,” said Ebony Wright, 38, who lives not a block away from the store and has been kept awake by people shouting into megaphones and playing music from speakers. “People who come down here don’t realize that there are people who actually stay here.”

U.S. Customs and Border Protection (CBP) officers seized a shipment of 15,750 Xanax pills in Cincinnati in late June, the agency...

Kitten peeks out of towel being rescued from a storm drain on Long Island. (Suffolk County Police Department via AP)...