Eleanor Carol Leavell Barr, the wife of Representative Andy Barr, Republican of Kentucky, died at the couple’s home in Lexington on Tuesday, his office said. She was 39.

“During this tragic time, we respectfully ask for privacy for Congressman Barr and his family to grieve Mrs. Barr being called home to heaven,” Ms. Rosado said in the statement. She said that Mr. Barr “may release a more detailed statement at a later date, but right now is solely focused on being a father” to the couple’s two daughters.

The cause of death was not immediately clear. The Fayette County coroner’s office said an autopsy was expected to be completed on Wednesday.

“Britainy and I are heartbroken for U.S. Rep. Andy Barr and his family tonight at the sad news of the unexpected passing of the congressman’s wife, Carol. We are praying for the Barr family,” said Gov. Andy Beshear in a statement Tuesday night.

Lawmakers from Kentucky published statements of condolence, including Senator Mitch McConnell, the majority leader, who said on Twitter that Ms. Barr’s “contributions made Kentucky a better place for all of us.”

The Lexington Herald-Leader reported that Ms. Barr, who went by Carol, grew up in Georgetown and majored in communications at the University of Kentucky. She and Mr. Barr married in 2008 and had two young girls, Eleanor and Mary Clay.

Ms. Barr was also a member of the advisory board for the University of Kentucky’s College of Communication and Information. According to her biographical information on the board, she worked for 10 years as a professional health care representative with Pfizer, Inc. and served two years as the executive director of the Henry Clay Center for Statesmanship. She also worked for Infinity Broadcasting, Viacom, Inc. as an account executive. 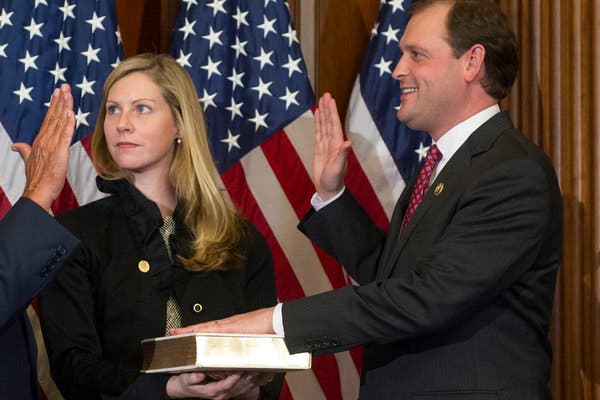 Ms. Barr and her husband in Washington in January 2015.Credit…Cliff Owen/Associated Press