Want to get The Morning by email? Here’s the sign-up.

Good morning. Chinese and Indian troops are fighting with clubs and rocks. President Trump signs an executive order on policing. And the U.S. death toll from the virus may soon pass Western Europe’s.

The coronavirus began to ravage Europe weeks before the United States. At the peak, in early April, more than 3,000 people in Italy, Spain and the rest of Western Europe were dying each day — a substantially higher toll than in the U.S.

Over the past two months, however, Europe has succeeded at crushing the virus, and the U.S. has not. Just look at this chart (which compares the U.S. to a contiguous 16-country region of Western Europe with a nearly identical population): 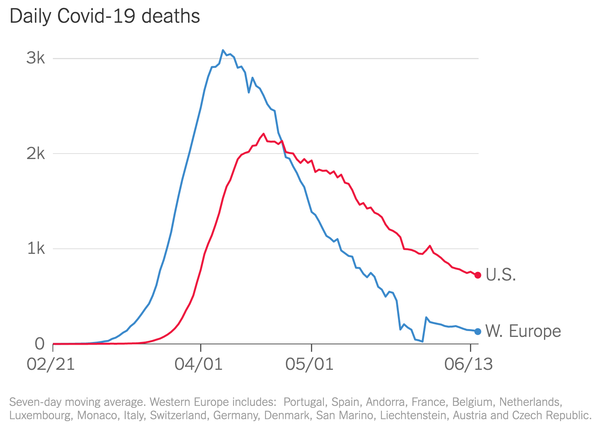 European countries have used a combination of lockdowns, public health guidance, tests and contact tracing to beat back the virus. Large parts of Europe have begun reopening, including schools, so far without sparking major new outbreaks.

The U.S. response has been more scattered and less successful. “Government efforts to inform the public about the pandemic have been a colossal failure, which means that most people are hearing mixed and muffled messages about what to do,” Jonathan Bernstein, a political scientist and Bloomberg Opinion columnist, wrote this week. “It’s not surprising that a lot of folks are believing misinformation as a result, and others are just throwing up their hands.”

Donald McNeil, who covers infectious diseases for The Times, points out that the U.S. states hit hardest and earliest by the virus, like New York and New Jersey, have followed a path similar to Europe’s: a terrible peak, followed by an aggressive response and falling caseloads.

“But I think a lot of states reopened pretty willy-nilly after pressure from small businesses and citizens who were out of work and frustrated by lockdown and who had not seen the virus hit anyone they knew yet,” Donald told us. “A lot of those states — Texas, Florida, Arizona, North and South Carolina, etc. — are now seeing cases and hospitalizations rise.”

On Tuesday, Arizona, Florida and Texas all reported their largest one-day increases in new cases.

1. A breakthrough in treatment

The drug has been around for decades and is already stocked in many pharmacies. Experts believe it may work by calming an overactive immune response known as a cytokine storm, which can overwhelm the body.

Trump signed an executive order yesterday to encourage, but not mandate, changes in policing. It restricted chokeholds and gave police departments financial incentives to train officers on the use of physical force.

The order omitted any mention of race, however, and activists and Democrats criticized it as weak. “I strongly oppose the radical and dangerous efforts to defund, dismantle and dissolve our police departments,” Trump said. “Americans want law and order. They demand law and order.”

3. China and India clash at the border

Pangong Tso, a lake near the disputed India-China border in the Himalayas, in 2016. Troops from both countries clashed there last month.Credit…Manish Swarup/Associated Press

At least 20 Indian soldiers have died after a brawl with Chinese troops as the world’s two most populous countries — both nuclear powers — fought in the Himalayas using clubs and rocks.

As we reported yesterday, three of the soldiers were killed during the fighting, though no shots were fired. An Indian military spokesman said 17 others had succumbed later to injuries in the freezing terrain, 14,000 feet above sea level.

Context: The violence is a continuation of a long-running dispute over the precise location of the countries’ jagged Himalayan border, known as the Line of Actual Control, established after a war in 1962. Despite occasional clashes, the deaths this week were the first military casualties along the border in decades.

4. A rebound in retail sales

Retail sales jumped 18 percent in May, a better-than-expected rebound after the pandemic temporarily closed stores in April. “The first stage of the recovery looks V-shaped,” The Wall Street Journal’s Greg Ip has noted, using the phrase for a sharp economic recovery.

Still, retail sales last month remained 6 percent behind where they were a year ago. And Jerome Powell, the Fed chair, warned lawmakers yesterday that a full economic recovery was unlikely until people were confident that the virus had been contained. Job losses have hit African-Americans, Hispanics and women hardest, Powell said.

Trickle down: High-income households have cut their spending particularly sharply, hurting many low-wage service workers who cater to the wealthy, a new analysis shows. These charts tell the story.

BACK STORY: A conspiracist for Congress

“QAnon” is the name of a tangled, pro-Trump conspiracy theory about “deep state” traitors involved in a global sex-trafficking ring. Now Marjorie Taylor Greene, a full-throated QAnon believer, is positioned to win election to the House of Representatives after winning a Republican primary in a conservative Georgia district last week.

A false conspiracy migrating from online message boards to the halls of Congress may seem shocking. But Kevin Roose, a technology columnist for The Times, isn’t surprised. “I think it was inevitable,” he told us. “QAnon is, at its heart, a right-wing activist movement. Its followers aren’t passive — they consider themselves soldiers in a digital army of ‘white hats’ that is going to take back the country, under President Trump’s leadership.” Greene is one of an estimated 53 QAnon exponents who ran for Congress this year.

QAnon has also benefited from the pandemic, which has kept many Americans indoors and online. “I think we’re probably still in the growth phase,” Kevin says. If you want to learn more about QAnon, Kevin covered it extensively in two recent episodes of the “Rabbit Hole” podcast.

Restaurants are about much more than food, as people have discovered while missing them during the pandemic. The Times asked several renowned writers to recount their most memorable meals out. The results were hilarious, sweet and often hunger-inducing.

Samantha Irby sang the praises of bucket-sized margaritas and SkinnyLicious Caesar salad at the Cheesecake Factory. Alexander Chee dished on waiting tables for celebrities in ’90s New York. And Carmen Maria Machado wrote about a biscuit from Red Lobster that taught her why her grandmother “used to stuff the contents of complimentary bread baskets into her foil-lined purse.”

A new player in the book world

A new website for independent bookstores — Bookshop, started by a small-press publisher in Brooklyn — is thriving during the pandemic. It’s on pace to exceed $40 million in sales this year; its original goal was to reach $30 million in annual sales by 2022.

But Bookshop has also created some tensions, The Times’s Alexandra Alter reports. Independent bookstores can make more money when they sell directly from their own websites, and some worry that Bookshop could become another online competitor. “If people have any idea that they want to help bookstores, they should order directly from bookstores,” an Oakland store owner said. Andy Hunter, Bookshop’s founder, countered: “If it’s sticky and it lasts beyond this Covid crisis, it’s going to really help bookstores thrive.”

A reduced and distanced Berlin Philharmonic performed in an empty hall on May 1.Credit…Sara Krulwich/The New York Times

As orchestras figure out how to safely resume performing, much of the focus has been on reducing the size of the audience. But in this era of airborne particles, a stage crammed with heavy-breathing flutists can also spread the coronavirus.

The Times’s Culture desk has put together a playlist of pieces for ensembles small enough to heed social-distancing rules, including a Haydn symphony and a modern cello arrangement with “punk rock energy.” (You can listen to it on Spotify.)

Here’s today’s Mini Crossword, and a clue: Use a keyboard (4 letters).

You can find all of our puzzles here.

Thanks for spending part of your morning with The Times. See you tomorrow. — David

P.S. Join a virtual conversation with the cookbook author Toni Tipton-Martin and Veronica Chambers, a senior editor at The Times. They’ll raise a glass to Juneteenth and talk about writing, history, race and food on Thursday at 6 p.m. Eastern. Register here.

Today’s episode of “The Daily” is about the police killing of Rayshard Brooks in Atlanta. On the latest Modern Love podcast, Lorraine Toussaint reads an essay about an interracial relationship.

Melina Delkic, Ian Prasad Philbrick and Sanam Yar contributed to The Morning. You can reach the team at themorning@nytimes.com.