From Columbus to Confederates, Anger About Statues Boils Over

The boiling anger that exploded in the days after George Floyd gasped his final breaths is now fueling a national movement to topple perceived symbols of racism and oppression in the United States, as protests over police brutality against African-Americans expand to include demands for a more honest accounting of American history.

In Portland, Ore., demonstrators protesting against police killings turned their ire to Thomas Jefferson, toppling a statue of the former president and founding father who also enslaved more than 600 people.

In Richmond, Va., a statue of the Italian navigator and colonizer Christopher Columbus was spray-painted, set on fire and thrown into a lake.

And in Albuquerque, tensions over a statue of Juan de Oñate, a 16th-century colonial governor who was exiled from New Mexico over cruel treatment of Native Americans, erupted in street skirmishes and a blast of gunfire, leading on Tuesday to aggravated battery charges and removal of the monument.

Across the country, monuments criticized as symbols of historical oppression have been defaced and brought down at warp speed in recent days. The movement initially set its sights on Confederate symbols and examples of racism against African-Americans, but has since exploded into a broader cultural moment, forcing a reckoning over such issues as European colonization and the oppression of Native Americans.

In New Mexico, it has surfaced generations-old tensions among Indigenous, Hispanic and Anglo residents and brought 400 years of turbulent history bubbling to the surface.

“We’re at this inflection point,” said Keegan King, a member of Acoma Pueblo, which endured a massacre of 800 or more people directed by Oñate, the brutal Spanish conquistador who became governor some four centuries ago. The Black Lives Matter movement, he said, had encouraged people to examine the history around them, and not all of it was merely written in books.

“These pieces of systemic racism took the form of monuments and statues and parks,” Mr. King said.

The debate over how to represent the uncomfortable parts of American history has been going on for decades, but the traction for knocking down monuments seen in recent days raises new questions about whether it will result in a fundamental shift in how history is taught to new generations.

“It is a turning point insofar as there are a lot of people now who are invested in telling the story that historians have been laying down for decades,” said Julian Maxwell Hayter, a historian and associate professor at the University of Richmond.

He said that statues removed from parks and street corners could be teaching points if they are placed in museums, side-by-side with documents and first-person accounts from the era.

“Let’s say you put a Columbus statue in a museum and you show students the way Columbus was lionized in a history textbook and you have them read ‘Devastation of the Indies’ by de Las Casas,” he said. “Then you have to ask, why were people invested in telling this particular version of Christopher Columbus’s history?”

The calls to bring down monuments have spanned far and wide, in large cities like Philadelphia and rural places like Columbus, Miss., touching both relatively obscure historical figures and deeply revered cultural symbols.

In Raleigh, N.C., the statue of a former newspaper publisher who was also a white supremacist was removed on Tuesday. In Sacramento, a tribute to John Sutter, a settler famous for his role in the California gold rush who enslaved and exploited Native Americans, was taken down this week. And in Dallas, construction crews recently removed a statue of a Texas Ranger, long seen as a mythical figure in Texas folklore, amid concerns over historical episodes of police brutality and racism within the law enforcement agency.

The unfurling movement has largely been welcomed by activists from the Black Lives Matter movement who see Confederate and other monuments as constant reminders of the oppressive history that created the reality they are battling today. But some of them worried that the focus on historic symbols would do little to keep attention on the more pressing issue of ending the brutal treatment of many African-Americans by the police.

“I don’t know if I would say a distraction, because I think people definitely have the ability to be nuanced,” said Alisha Sonnier, a 24-year-old mental health advocate from St. Louis who worried that taking down statues could be an “easy appeasement.”

Cleon Jones, a 77-year-old activist in Africatown, Ala., formed on Mobile Bay by the last known shipment of slaves to the United States from Africa, said he felt frustrated by the notion that progress toward equality could be stalled by rancor over Confederate monuments.

“We’ve got to move forward, not look back,” he said. “As long as we are dealing with these statues, we’re not moving forward.”

The focus on removing statues has revealed deep civil divisions far outside the Black Lives Matter movement that are hundreds of years in the making. It has spurred a backlash among Italian-Americans who have long regarded Columbus as a point of pride, and also among some Hispanics in New Mexico, who celebrate an era when Anglos did not dominate public life in New Mexico. 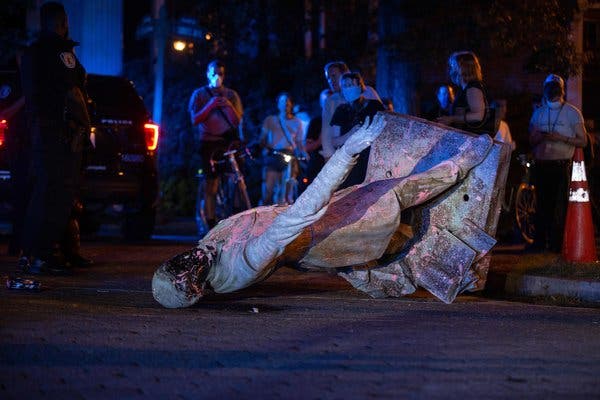 A statue of Jefferson Davis, president of the Confederate States of America during the Civil War, was toppled by protesters in Richmond, Va., last week.Credit…Parker Michels-Boyce/Agence France-Presse — Getty Images

The head of a statue of Christopher Columbus was pulled off in Boston last week amid protests over the killing of George Floyd.Credit…Brian Snyder/Reuters
In Sacramento, a tribute to John Sutter, a settler famous for his role in the California gold rush who enslaved and exploited Native Americans, was taken down this week.Credit…Daniel Kim/The Sacramento Bee, via Associated Press

“Absolutely, we need to have a broader discussion about our history,” said Christine Flowers, a 58-year-old Italian-American immigration lawyer, who was among a group of about 100 people who gathered to protect a statue of Columbus in Philadelphia, some of them armed with bats or guns.

But she added, “It is indefensible to try to erase that history by pulling down something that is very dear and very symbolic for the culture of Italian-Americans in Philadelphia.”

In Columbus, Miss., a largely African-American town near the Alabama state line, county officials voted along racial lines on Monday to keep a towering monument to Confederate soldiers — “our heroes,” it calls them — on the courthouse lawn despite mounting calls for its removal.

“It’s a good time to learn some history,” said Trip Hairston, a white county supervisor who opposed removing the monument. “I don’t agree with all that history, of course, but it is what it is — it’s history.”

It was an argument that left many of those pushing to remove the statue perplexed. “It’s commemorating and celebrating a lost battle — I don’t understand,” said David Horton, 28, a lifelong resident of Columbus who first fought against a Confederate monument as a 7th grader at Robert E. Lee Middle School.

Symbols of the Confederacy and its legacy of slavery have long been at the center of the reckoning over historic racism in the country.

At least 114 Confederate symbols were removed in the years after a white supremacist killed nine people at a historic African-American church in Charleston, S.C., in 2015, according to a 2019 report by the Southern Poverty Law Center.

The killing of Mr. Floyd in Minneapolis almost immediately re-energized that movement, as demonstrators chipped away at a 52-foot Confederate obelisk in Birmingham, Ala., and toppled a statue of Jefferson Davis, the president of the Confederacy, in Richmond, Va. Cities across the country are now debating the merits of such monuments with renewed vigor.

The statues debate has once again focused attention on Columbus, the voyager who emerged as a symbol of Italians’ contribution to American history in the late 1800s, a time when discrimination against Italians was rampant. But many in recent days are also talking about how his arrival signaled the beginning of a violent European colonization that resulted in a cross-Atlantic slave trade and the genocide and displacement of many Indigenous peoples.

Columbus statues from Boston to Miami have been brought down or defaced by protesters. A large Columbus statue was defaced with red graffiti in Kenosha, Wis., and Gov. Andrew M. Cuomo of New York defended a towering monument to the explorer at Columbus Circle in Manhattan.

“I understand the feelings about Christopher Columbus and some of his acts, which nobody would support,” the governor said this week. “But the statue has come to represent and signify appreciation for the Italian-American contribution to New York. So for that reason, I support it.”

In Philadelphia, supporters went to court to try to block the removal of a Columbus statue without a public hearing after another statue, of Frank L. Rizzo, a former mayor who was known for racist and discriminatory policies, was removed by the city this month in the middle of the night. “You just can’t let the mob rule,” said George Bochetto, a lawyer who filed the petition for an emergency injunction.

Tensions over the Oñate monument came to a boil Monday night in Albuquerque, when dozens of protesters engaged in shouting matches, some seeing the brutal Spanish governor as a symbol of massacre and repression, while others saw him as a positive symbol of a time before Anglos came to dominate the Southwest. Then a group of white militia members, on a self-appointed mission to protect the statue, showed up with guns.

In the mayhem that ensued, a man was seen assaulting female protesters by violently shoving them to the ground. At one point the same man used pepper spray on protesters. As protesters pursued the assailant to drive him out of the crowd, the man pulled out a weapon and shot one of the protesters, prompting police officers in riot gear to rush in.

On Tuesday, the authorities in Bernalillo County filed a charge of aggravated battery with a deadly weapon against the man with the gun, identified as Steven Baca, 31. Mr. Baca ran unsuccessfully for the Albuquerque City Council last year.

The authorities promptly removed the Albuquerque statue on Tuesday, a day after another Oñate statue was taken down in northern New Mexico.

In Minneapolis, where the demonstrations over Mr. Floyd’s death ignited new protest movements in dozens of cities around the country, many said they never expected them to grow into an international reckoning over racist symbols. Still, looking back, they said, it was only a matter of time before the latest police killing of a black man led to something more lasting than previous protests.

“It’s kind of like a wound that has a scab,” said Teron Carter, 49, standing across the street from Cup Foods, the deli near Mr. Floyd’s fatal encounter with the police. “A wound that has a scab is still a wound, it’s just that the scab is on top. And if you scrape that scab a certain way, it reopens the wound.”

He attributed the scope of the burgeoning movement to built up grief and to the energy of young people who simply are not willing to put up with walking by Confederate and other statues each day.

“It’s not just an isolated city event,” Mr. Carter said. “Now everybody saw the opportunity and said, ‘If we don’t get in there and talk like Minneapolis is talking, then we aren’t going to be heard.’”