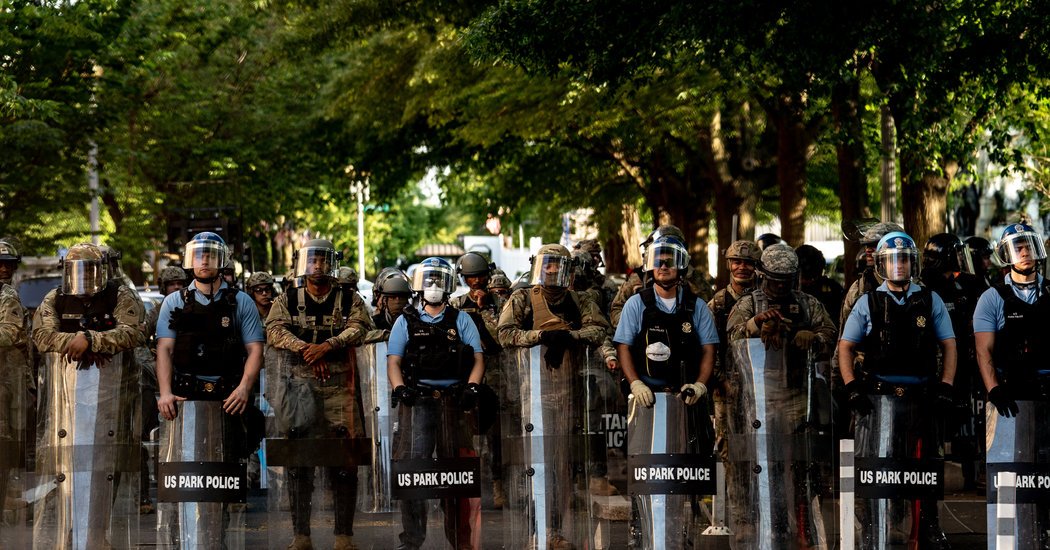 WASHINGTON — The architects of the post-9/11 domestic security apparatus say the Trump administration’s militarized response to anti-racism demonstrations has been a misuse of law enforcement resources designed to combat threats from overseas.

President George W. Bush’s two permanent secretaries of homeland security, Tom Ridge and Michael Chertoff, joined 21 other homeland and national security officials this week on a letter that labeled the Trump administration’s actions as more like combat against a terrorist threat abroad than law enforcement.

“We reject a militarized response to protests to deny citizens their constitutional rights,” the group wrote. “Moreover, the blanket use of the label ‘terrorists’ to justify the use of paramilitary and military force is both factually wrong and legally unsupportable.”

The letter did not mention President Trump by name, but Mr. Chertoff said in an interview on Tuesday that he signed it after Mr. Trump threatened to unleash the military into cities, deployed Black Hawk and Lakota helicopters on protesters in Washington and dispatched scores of Customs and Border Protection and Immigration and Customs Enforcement officers to protests in Washington. The job of responding to the demonstrations was better suited for local law enforcement, he said.

“I don’t think you needed to get into low-flying helicopters, tear gas and threats to bring in the U.S. military,” Mr. Chertoff said. He described the move as “an overreaction and pouring gasoline on the fire.”

Mr. Chertoff and Mr. Ridge were joined by other former national security officials from the Obama and Bush administrations, including Michael E. Leiter, a former director of the National Counterterrorism Center under both presidents.

The Trump administration’s deployment of military assets and officials from various federal agencies to American streets in early June, after a weekend of protests that included some instances of looting, has prompted a backlash across the political spectrum. Police departments have responded to protests with riot teams, armored vehicles known as BearCats, tear gas and sound cannons developed by the military. Those actions have only intensified demands from activists to “defund the police.”

Former law enforcement officials also pointed to the security infrastructure put in place after the Sept. 11 attacks that was supposed to help police departments prevent terrorist attacks. But as public safety agencies shifted their focus from overseas to at home, tactical resources have been repurposed for use within American borders.

The Department of Homeland Security has provided billions of dollars in grants, including more than $1 billion this year, for localities to help defend against a terrorist threat or natural disaster. Police officials have long fought for more of the funds to be geared to law enforcement agencies.

Juliette Kayyem, a former assistant secretary of homeland security in the Obama administration who signed the letter, said the funding was created to prevent the next attack from overseas, not provide local police with riot gear and armored vehicles to respond to demonstrations.

She also pointed to the establishment of law enforcement stations around the United States, known as “fusion centers,” that were created to ensure that federal, state and local agencies could easily share data on potential terrorism threats with each other. Officials in the centers in recent weeks have monitored social media and other sources for indicators of individuals looking to commit an attack under the guise of thousands of peaceful protesters.

“There was a whole infrastructure built in the post-9/11 era that was focused on essentially stopping 19 guys from getting on four airplanes, and that might have been the correct sentiment at the time,” Ms. Kayyem said. “But there are now legacies to that 9/11 genesis that have a strong hold on states and cities, and we just have to break it.”

Mike Sena, the president of the National Fusion Center Association, said those centers are not geared toward collecting the data of demonstrators.

“Anytime there is a mass gathering of people, special events or whatever it may be, a fusion center’s role is to make sure that there are no known threats to the people that are attending,” he said, not to police the crowd.

Last fall, the Department of Homeland Security issued a strategy document highlighting domestic terrorism as a primary threat to the country after being accused for years of underplaying the threat. Leaders of police departments have cited that shift in pushing for the continued federal support.

“There does have to be a line in the sand,” said Chuck Wexler, the executive director of the Police Executive Research Forum, a research organization. “We want to be careful that these assets aren’t used to disrupt peaceful demonstrators, and if they are used that they’re used to prevent violence.”

James Loy, a former acting secretary of homeland security who helped establish the department after Sept. 11, said he understood why police chiefs would want to deploy federal assets to protests if they turned violent. But Mr. Loy, a former Coast Guard commandant under Mr. Bush, questioned how federal law enforcement resources were being used.

The federal system for funding local police “was put into place very assiduously, very carefully in the wake of 9/11, but it was all inside the envelope of counterterrorism,” Mr. Loy said. “It certainly has very little if anything to do with coping with domestic protests guaranteed under the Constitution.”

https://www.youtube.com/watch?v=VWFZJIcpwO4 President Donald Trump and Brazilian President Jair Bolsonaro are two of a kind. CNN's Bill Weir reports on how...

Foreign college students must take classes in person or may have to leave country: reports

The U.S. Immigration and Customs Enforcement announced Monday that foreign students in the country are required to take some in-person...