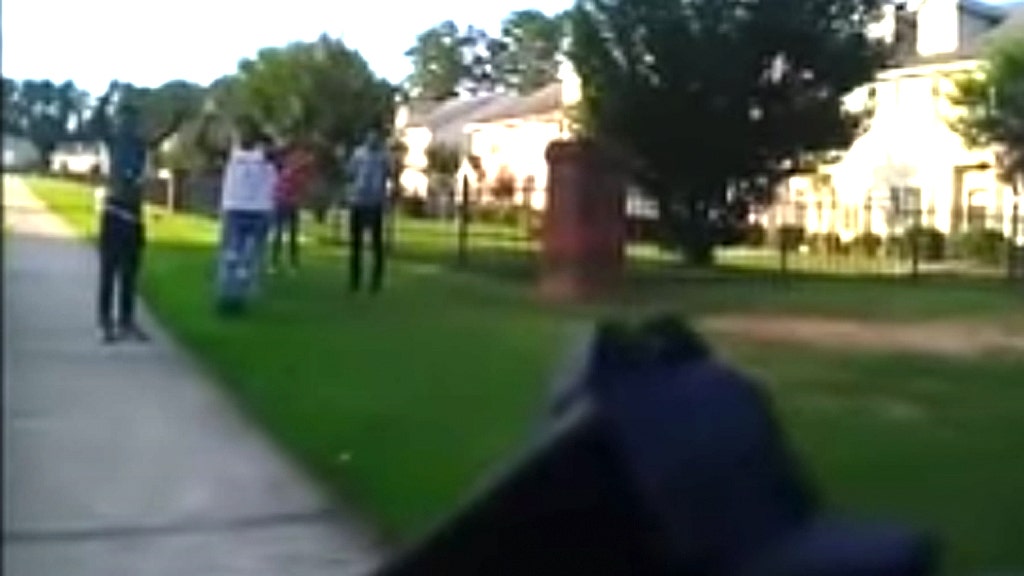 A police department in Georgia is facing criticism after a video circulating online shows an officer holding five black teenagers – with their hands up – at gunpoint on a residential street before neighbors stop to tell the officer not to shoot.

But the Clayton County Police Department said the cellphone video recorded by a bystander only shows a “small portion of the entire incident,” and the officer was responding to a 911 call made by a gas station clerk in Jonesboro. The clerk reported that the boys tried to steal from his store before heading into the parking lot, where they began to argue and one waved what appeared to be a gun.

The officer, who was not identified, said in the incident report that he responded to the gas station, where the clerk told him the boys ran through the woods toward Thomas Road. The officer said he spotted a group of boys matching the clerk’s description and, “fearing they might be armed and for my safety, I pulled out my service weapon and pointed it at the juveniles,” Clayton News Daily reported.

Police released over 17 minutes of body camera footage and the recordings of two 911 calls.

The body camera footage shows the officer pointing his weapon at the boys, telling them repeatedly to “get your hands up.” He can be heard saying, “Now, listen to me so you don’t get hurt. Don’t move. Don’t move. Just relax. Please, I don’t want to hurt one of ya’ll… Young man, don’t move.”

“Why does a guy think that one of ya’ll has a gun?” the officer asks.

The officer radios for back-up as a crowd of passersby begin to gather around him.

That’s when the cellphone video recorded by Shanelle Ladd begins, according to Fox 5 Atlanta. It was posted on Instagram Tuesday by Mary-Pat Hector, an advocate with the National Action Network, and received more than 100,000 views.

People can be heard shouting at the officer, “Don’t shoot… Don’t Shoot.” One person asks, “They are kids … What did they do?”

“Why you got a gun out?” someone shouts.

“Because I’m being safe,” the officer responds.

Another cries out, “This is too much… They babies.”

Two officers are seen patting down the five boys. The department said officers brought the boys back to the gas station, where they viewed surveillance footage that showed the teens were in possession of what looked like a pistol. The boys led officers to where they threw what police confirmed was a BB gun into the bushes. All five were released to their parents and no charges were filed.

In a press conference Tuesday, Clayton Police Chief Kevin Roberts, who is black, said none of the boys were handcuffed, and he’s dedicated to complete transparency about the incident. He said the boys were “compliant and cooperative while everyone around them was the outside noise.”

“Police officers make mistakes. They make bad decisions. This is not one of those times. He was doing his job,” Roberts said. “What I need for the community to do is allow for us to explain before they jump to conclusions. Because the conclusions are already out there and it’s unfair to this agency and the officers now going home.”

“As your chief, it’s my mission to be accountable to you, and if we mess up, I’m going to tell you we messed up. But I want the community to give us a chance to explain before they cast judgment,” he said.

A separate press conference was held with some of the boys and their family members on Tuesday, where they called for several police reforms and for the officer involved in the incident to be fired.

“Black leadership is not enough to us. We don’t care if the officer is black,” Hector said. “We haven’t been protesting white racist cops. We’ve been protesting against the blue shield and the fact that they believe that we don’t have rights as people of color. Whether it’s stop-and-frisk in New York, up against the wall in Chicago, assume the position in Oakland, enough is enough, we’re not going to take it.”

“As I watched that film, I couldn’t help but think what would have happened if the community didn’t show up and show out for them that day,” Hector continued, according to WXIA-TV. “We’re holding Clayton County, the board of commissioners, Chief Kevin Roberts accountable for this. And, we’re saying that we need revisions, and, not just your revisions, we want you to give the community that opportunity to say ‘this is how we want you to police us’.”

They said a protest was scheduled for Wednesday.

https://www.youtube.com/watch?v=Hr7tZSG370o This is the first time the president has been spotted wearing a mask on camera; Mark Meredith reports. Subscribe...