Police reform has been thrust into the limelight following the death of George Floyd in the custody of a Minneapolis police officer last month, prompting calls for a litany of police reform measures aimed at squashing racism and abuses of power – ranging from dismantling the stronghold of police unions across the countries to redistributing law enforcement funds to community programs to even shuttering police departments altogether.

But ethics experts and legal analysts say that the issue of whistleblower protections requires further attention – and may hold the pivotal key to positive changes within police departments across the country.

“There is tremendous negative pressure on police officers with regard to whistleblowing on fellow officers. Whistleblowers risk the threat of harsh penalties such as retaliation, ostracization, and harassment,” said Juliette Gust, founder of management consulting firm Ethics Suite. “An officer may be the only witness to a partner’s alleged misconduct, making the identification of the whistleblower obvious to all. Furthermore, the power of collective bargaining agreements between a city and its officer’s union has also been under scrutiny in recent days for prohibiting anonymous reporting.” 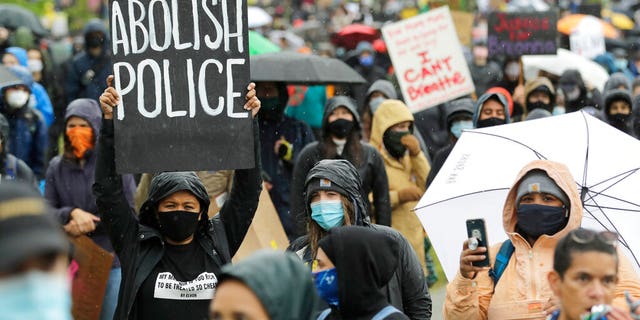 A protester holds a sign that reads “Abolish Police” during a “Silent March” against racial inequality and police brutality that was organized by Black Lives Matter Seattle-King County, Friday, June 12, 2020, in Seattle. Hundreds of people marched for nearly two miles to support Black lives, oppose racism and to call for police reforms among other issues. (AP Photo/Ted S. Warren)

According to Gust, there have been numerous high-profile cases of police whistleblowers claiming they were intimidated by the “code of silence,” often referred to as the “Blue code.”

“Some of these officers have reported threats to their safety and that of their family. Officers may also believe that they will be ostracized by their peers, retaliated against in various forms, like being given undesirable assignments, or that they could be terminated from their jobs for an infraction that would not normally result in termination,” she said. “All of these concerns have a chilling effect on an officer’s willingness to report misconduct.”

DEFUND OR DISMANTLE THE POLICE? WHAT IT COULD MEAN

The issue is hardly new, having been a point of contention across the country for decades.

In one recent example, police officer Murashea Bovell secretly recorded his colleagues in Mount Vernon, N.Y., allegedly “admitting to false arrests, planting evidence, beatings, and other misdeeds,” according to Gothamist/WNYC.

The Office of Westchester County District Attorney Anthony Scarpino was sent at least some of the tapes last year, though no formal charges have been brought by either the DA or the FBI, which is said to have examined the recordings.

And in November 2016, a former Miami Gardens, Fla., police officer filed a federal lawsuit with claims that he was terminated for exposing the police department’s illegal “stop and frisk” searches and unlawful apprehensions of black males. The plaintiff, Jose Rosado, alleged that months after he sent a letter to city officials in 2014 detailing the activity, he was fired in retaliation. 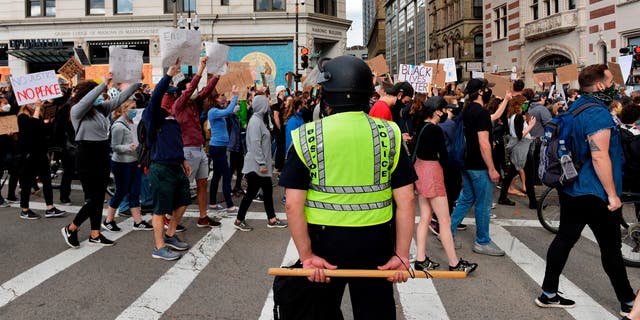 A police officer holding a baton stands by as people march to call for Police Department reform as part of the “Unite Against Racist Police Terror! Boston Speakout and March” in Boston, Massachusetts on June 7, 2020. – Protesters have rallied for racial justice in cities across the United States following the death of George Floyd at the hands of police on May 25. (Photo by Joseph Prezioso / AFP) (Photo by JOSEPH PREZIOSO/AFP via Getty Images)

Scores of similar situations have also been documented dating back to the 1990s and early 2000s.

In the early 1990s, according to the Rutgers University Journal of Law and Urban Policy, at least one NYPD officer who cooperated in a mayor-ordered police corruption investigation was later “sent obscene materials to his house, had his workstation was vandalized, was denied a promotion, and he received threats to his life.”

In another case documented by the journal in Pomona, Calif., in 1995, police officer Jed Arno Blair alleged that other officers stole money and planted drugs on suspects. Blair himself subsequently “suffered retaliation for coming forward,” which included “colleagues stealing his equipment, interfering with his radio calls, threatening to kill him and his family, and scrawling the word ‘rat’ on his locker.”

Kelly Hyman, federal trial attorney at the New York-based Hyman Law firm, concurred that there are “almost always grim consequences to whistleblowers, both personally and professionally, which often discourages those who’ve witnessed wrongdoing from coming forward, and in the police department, where loyalty among officers is fundamental to their unwritten moral code, it’s even tougher to come forward. In police departments, those who do blow the whistle are fired or ostracized.

“Adding to the silence inherent in the Blue Shield, those who do speak out in any public organizations are not protected under the right of free speech, according to the 2006 Supreme Court decision,” she explained. “We all pay the price. The police departments themselves pay heavily. The heavy threat of retaliation prevents officers from coming forward to expose corrupt and abusive practices, and it prevents it from being addressed in house. Police departments lose because, inevitably, outside institutions expose the violations. The community pays the price as well. When police whistleblowers are retaliated against and silenced, the corruption continues.”

Alex del Carmen, associate dean and professor of criminal justice and strategic studies at Tarleton University, further underscored that though The Whistleblower Protection Act of 1989, protects federal employees that engage in the act of whistleblowing, police officers in local jurisdictions would be subject to the protection afforded by each state. All 50 states have such laws in place though the extent to which they are applied varies.

“It should be examined through the enactment of a federal law that protects all police officers regardless of their specific jurisdiction. Doing this brings uniformity to the protection of all whistleblowers, as the laws differ by state,” del Carmen asserted. “In police departments that do not tolerate corruption, they are viewed as heroes. In other police departments where perhaps there may be an expectation that illegal behavior is to be tolerated, they may be viewed as not being part of the law enforcement family.”

David Katz, a former assistant U.S. attorney, conjectured that there are many reasons cops cover for one another.

“If a cop still works at a police department, it has been unrealistic to expect that he will tell on a colleague there for criminal conduct like excessive use of force that ended in death or severe injury to a civilian,” he surmised. “Anti-retaliatory protocols, even if in place, were not thought to have real teeth.” 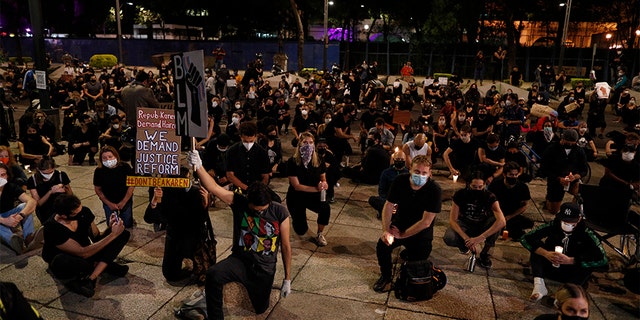 Protesters kneel outside the U.S. Embassy during a peaceful demonstration denouncing racism and calling for justice for victims of police violence, in Mexico City, Thursday, June 4, 2020. Americans, Mexicans and other foreign nationals gathered in Paseo de la Reforma Thursday night, chanting “Black lives matter” and kneeling silently as the names of victims of violence were read aloud, including that of George Floyd, a black American man who died after being restrained by Minneapolis police officers on May 25. (AP Photo/Rebecca Blackwell)

So what does “reformed whistleblowing” within police departments actually look like?

“Removing the restrictions against anonymous whistleblowing in collective bargaining agreements is a significant first step. In the event a whistleblower chooses to step forward and provide their identity, they should also receive stronger whistleblower protections than currently offered,” Gust noted. “In addition, marshaling anonymous internal reports should be assigned to an objective third party to ensure that all reports are properly triaged, investigated, remediated if necessary, and tracked in an auditable fashion.”

She also stressed that complaints made by citizens should be reviewed and tracked internally to determine if there are any patterns of misconduct identified between internal and external reports.

“For example, there may be several reports made by citizens against an officer that is supported by internal reports of similar behavior displayed by that same officer,” Gust continued.

And as the nationwide debate over police reform continues to unfold, President Trump on Tuesday signed a new executive order officially banning police chokeholds unless an officer’s life “was at risk.” This comes on the heels of U.S. House Democrats proposing an extensive Justice in Policing Act. And although police unions across the U.S. have long been wary of reform efforts, Trump has gone out of his way to underscore his backing for local law enforcement, highlighting that he strongly opposes “the radical and dangerous efforts to defund, dismantle and dissolve our police departments, especially now when we’ve achieved the lowest recorded crime rates in recent history.”