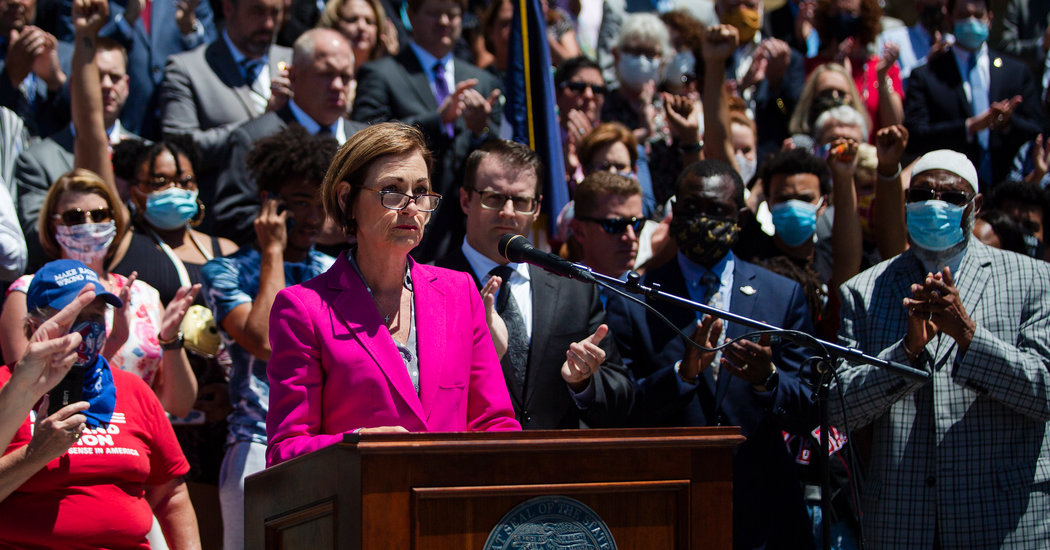 Gov. Kim Reynolds of Iowa said Tuesday that she would issue an executive order to restore voting rights to paroled felons, ending Iowa’s distinction as the last state in the country to strip all former felons of voting rights for life.

As protests over police violence erupted across Iowa in recent weeks, as they have around the country, activists pressured the governor on the issue at the State Capitol. Supporters of Des Moines Black Lives Matter chanted “let them vote” outside the Capitol on Monday, and along with other rights groups and state lawmakers, they met privately with the governor twice.

Ms. Reynolds, a Republican, indicated on Tuesday that she would sign the executive order before the November presidential election, automatically restoring the voting rights of felons who have completed their sentences.

“We’re working on that right now, sitting down with various groups, listening to what they think is important, what is contained in that executive order,” Ms. Reynolds told reporters, according to Radio Iowa, “and then I’ve got my legal team working on it.”

As of 2016, 2.2 percent of voting-age adults in Iowa were unable to vote because of felony convictions, including 9.8 percent of African-Americans in the state, according to The Sentencing Project, which promotes criminal justice reform. The only way a former felon in Iowa can currently regain the right to vote is to individually petition the governor.

The details of Ms. Reynolds’s executive order remain unclear. This month, she signed a Republican-backed bill that excludes former felons who committed certain crimes, including homicide and sex offenses, from automatically regaining voting rights, and that requires released felons to pay restitution before they can vote. Democrats opposed the law, calling restitution a latter-day poll tax.

As restoration of voting rights to former felons has become a fast-moving aspect of criminal justice reform in many states, Iowa has remained an outlier. Ms. Reynolds’s predecessor, Gov. Terry Branstad, a Republican, revoked in 2011 an earlier Democratic governor’s executive order automatically restoring felons’ voting rights. After succeeding Mr. Branstad, Ms. Reynolds proposed in 2019 that a constitutional amendment be put to voters on the matter. The Republican-led Legislature, which must first pass a constitutional amendment, has declined to move ahead. On Sunday, lawmakers adjourned for the year without taking action.

Since 1997, 23 states have partly or fully restored voting rights to felons, according to The Sentencing Project. Last year, Gov. Andy Beshear of Kentucky, a Democrat, restored the right to vote to more than 140,000 people who had completed sentences for nonviolent felony offenses.

Florida voters overwhelmingly approved a constitutional amendment in 2018 to restore voting rights to nonviolent felons, which would have expanded the franchise overnight to hundreds of thousands of people. But Republican lawmakers in the state, seeking to blunt the amendment, passed a law requiring released felons to pay all fines, court costs and victim restitution before being able to vote. A Federal District Court judge struck down the law as amounting to a poll tax. The case, with the potential to shape the outcome in Florida’s perpetually close-fought presidential race, is before an appeals court. On Sunday, the district court judge refused the request of Gov. Ron DeSantis, a Republican, to stay his order while the appeal is heard.