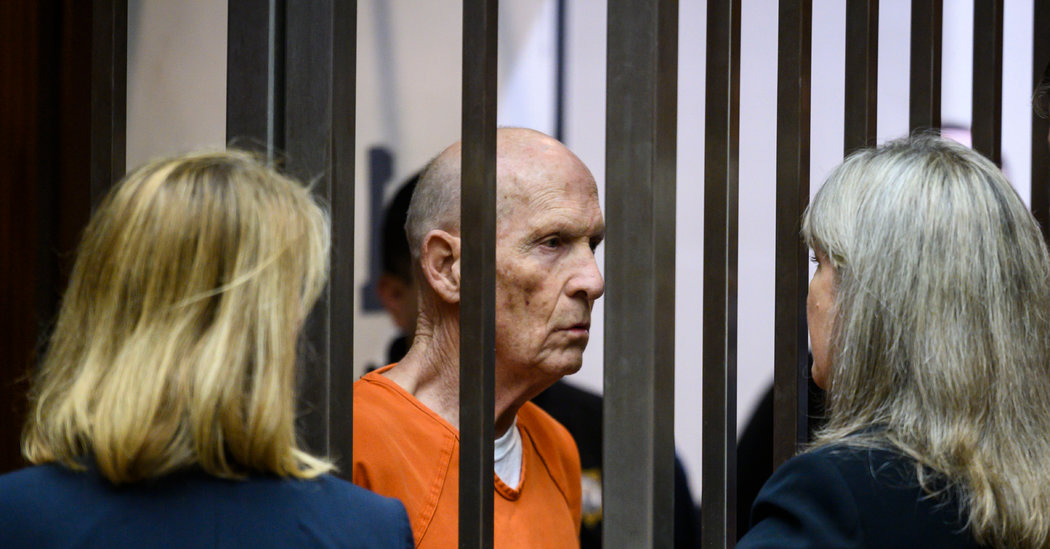 The man accused of committing a series of murders and rapes in California during the 1970s and ’80s — crimes that spawned widespread fear and the sobriquet “Golden State Killer” — is expected to accept a plea deal that would allow him to avoid the death penalty, one victim and close relatives of two other victims said on Monday.

As part of the agreement, the man, Joseph James DeAngelo Jr., is expected to plead guilty later this month to dozens of criminal counts, including murder and kidnapping, that would send him to prison for the rest of his life without the possibility of parole, a victim and victims’ family members said.

They said that prosecutors had briefed them about the likely plea agreement, which still must be approved by a judge.

It was not immediately clear if there was unanimity among the group of prosecutors involved in the case, the victims and their families. The plea agreement was widely reported by the news media in California, where the case has become a phenomenon and inspired an upcoming HBO documentary series. It was the first high-profile case to be cracked with genetic genealogy.

Mr. DeAngelo, 74, is also expected to admit guilt for a multitude of crimes for which he was not charged, some of which are past the statute of limitations, those familiar with the plea agreement said.

Gay Hardwick, who was raped in 1978 while her now-husband Bob Hardwick was tied up, said in an interview on Monday that she had mixed feelings about a plea agreement.

“My view has been he will never be able to serve a long enough sentence,” Ms. Hardwick said. “He’ll never serve the sentence that the rest of us have served.”

But, she added, “knowing that he has admitted responsibility is a big step toward closure for us.”

Mr. DeAngelo’s lawyers did not immediately respond to requests for comment.

In a joint statement issued on Monday, the six district attorneys who are involved in the case alluded to the advantages of accepting a plea agreement. But the prosecutors stopped short of confirming whether they had reached such an agreement and would not discuss its conditions.

“We have a moral and ethical responsibility to consider any offer from the defense, given the massive scope of the case, the advanced age of many of the victims and witnesses, and our inherent obligations to the victims,” the prosecutors said.

Representatives from the district attorney’s office in the counties where the crimes occurred had reached out to the victims and their families over the past couple of months to tell them that they were considering accepting the plea deal, those briefed on the agreement said. They were asked for their input. And around June 1, they were informed that the various prosecutors involved in the case and Mr. DeAngelo’s lawyers were finalizing an agreement, they said.

Mr. DeAngelo’s public defenders had sought to spare him from the death penalty, which California last used in 2006. Last year, Gov. Gavin Newsom imposed a moratorium on the death penalty in California, which he said had failed to deter violent crimes and disproportionately harmed people of color.

Ron Harrington, whose brother and sister-in-law, were bludgeoned to death in their Orange County home in 1980, said in an interview on Monday that he had originally hoped that Mr. DeAngelo would get the death penalty. His sister-in-law was also raped.

But Mr. Harrington said that he was eager to resolve the case and knew that it could become protracted because of legal issues surrounding the death penalty in California.

In making a case for Mr. DeAngelo to avoid being sent to death row, his lawyers had argued that a drawn-out trial would cause further anguish for the families of his victims. A trial would have also created logistical challenges for the court, which would need to maintain social distancing during the coronavirus pandemic.

Mr. DeAngelo, a former police officer, had eluded the authorities for four decades before he was arrested in 2018 in a Sacramento suburb. Investigators used a DNA sample that had been found at the scene of a double murder in Ventura County in 1980 to create a fake profile on a genealogy website. They were able to match the sample to distant relatives of Mr. DeAngelo’s.