Mayor Bottoms Tightens Rules on Atlanta Police’s Use of Force

ATLANTA — In the wake of the death of a black motorist by a white Atlanta police officer, the city’s mayor announced on Monday a series of reforms aimed at dramatically overhauling how the Police Department uses force.

De-escalation techniques will now be required before an officer employs deadly force, said Keisha Lance Bottoms, the city’s first-term mayor, and officers will be “duty bound to intercede” when they see other officers engaging in unreasonable applications of force. The city’s 2,000-plus officers also will be ordered to use only the “amount of objectively reasonable force” to protect themselves and others so that they can make an arrest or bring an incident under control.

“It is clear we do not have another day, another minute, another hour,” Ms. Bottoms, who is black, said of the executive orders, which came on the heels of the resignation over the weekend of the city’s white police chief and the termination of the officer who shot and killed the 27-year-old motorist, Rayshard Brooks.

Ms. Bottoms, like many other U.S. mayors, has struggled to seek a balance between law and order and compassion for the demonstrators that have flooded American streets since the death of George Floyd, an African-American man killed last month when a Minneapolis police officer restrained him with a knee to his neck for nearly nine minutes.

The death on Friday night of Mr. Brooks, in the parking lot of a Wendy’s restaurant, prompted a weekend of angry demonstrations in Atlanta that included the burning of the restaurant, and amplified a growing chorus of voices calling for a national re-evaluation of when the police should be allowed to use deadly force.

The nationwide effort to tighten the rules governing when and how police officers should use deadly force gained momentum after the 2014 police killing of Michael Brown in Ferguson, Mo., and has picked up steam since the killing of Mr. Floyd. Significant changes in use-of-force policy have been adopted by state and city governments as some protesters continue to call for police departments to be defunded or abolished. 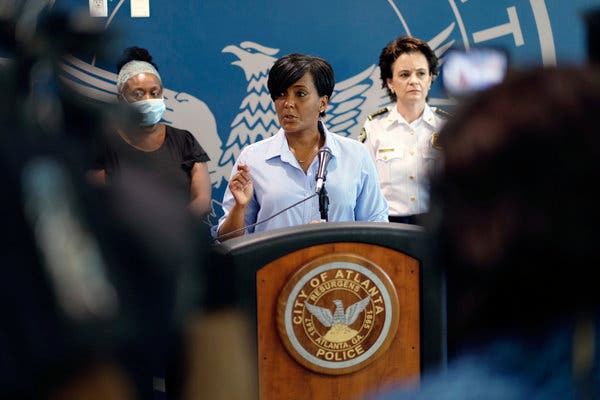 Mayor Keisha Lance Bottoms of Atlanta speaks in the midst of protests over the death of George Floyd. The city’s police chief, Erika Shields, right, has since resigned following the death of Rayshard Brooks.Credit…Ben Gray/Atlanta Journal-Constitution, via Associated Press

The recent uproar over policing reflects a marked shift away from a decades-long reality in which police officers have been given considerable leeway in making split-second decisions to use lethal force.

Before announcing the reform efforts in Atlanta, Ms. Bottoms had already organized a task force charged with mapping out a potential overhaul of the department’s use-of-force policies. Shean Williams, a lawyer who has brought police brutality suits against the Atlanta Police Department and was named a member of the task force, praised the mayor’s new orders, saying that they were a “substantial step toward actual change.”

Mr. Williams said the current policy left too much ambiguity over what was considered reasonable force and lacked a rigorous system to hold officers accountable for their actions. He said that many in the community had lost trust in the Police Department.

Vincent Champion, the southeast regional director for the International Brotherhood of Police Officers, a union that includes the Atlanta force, said that the policies Ms. Bottoms outlined did not appear to be a departure from those currently in place.

And he assailed her for describing Mr. Brooks death as a “murder,” which she did during the news conference, saying that it maligned officers while the shooting remained under investigation.

The sustained protests across the country in the weeks since Mr. Floyd’s death have prompted a nationwide reckoning with racism that extends far beyond questions of policing. And in Georgia, Mr. Brooks’s killing was the latest in a series of recent controversies that have reminded residents of the worst injustices of the past.

Last week, the state’s primary election was marred by a meltdown of a new computerized voting system that forced many people to wait in line for hours to cast a vote. In South Georgia, the killing in February of Ahmaud Arbery, a black man, by white men who told the authorities they thought he was a burglary suspect, has echoed with the dark history of Southern lynchings.

On Monday morning, hours before Ms. Bottoms spoke live on national television, thousands of demonstrators peacefully took to the streets of downtown Atlanta to decry those perceived injustices and call for solutions, including the repeal of the state’s citizen arrest statute and the passage of a statewide hate-crimes bill. Georgia is one of four states without such a law.

The roster of speakers in the majority-black city included local politicians and boldfaced names with Atlanta roots, including the hip-hop artist Jeezy. Lloyd Pierce, head coach of the Atlanta Hawks, the city’s N.B.A. franchise, spoke with raw emotion of his pride in being black as members of the team stood silently behind him onstage, their faces obscured by masks in an effort to protect against the spread of the coronavirus.

Mr. Pierce said he would die a black man. “But I don’t want to die because I’m a black man,” he added.

Late Monday morning, the family of Mr. Brooks gathered for a news conference in which they laid bare their anguish and grief. Mr. Brooks’s niece, Chassidy Evans, said she had watched a video of his killing Saturday morning that had circulated around social media without initially knowing that the man was her uncle.

“Not only did we lose another black, unarmed male,” Ms. Evans said. “This time, it landed on our door step.”

‘When Does This Stop?’ Family of Rayshard Brooks Speaks Out

The family of Rayshard Brooks held a news conference in response to his killing, the latest to stir outrage over deadly violence by the police against African-Americans.

“On June 12, one of our biggest fears became our reality. Not only did we lose another black, unarmed male, this time it landed on our front doorstep. Not only are we hurt, we are angry. When does this stop? We’re not only pleading for justice, we’re pleading for change.” “Rayshard Brooks, the name that may start a protest tomorrow or another day in the future. However, the man himself no longer has a future. He can no longer live in the present nor plan for tomorrow. How many more protests will it take — to ensure that the next victim isn’t your cousin, your brother, your uncle, your nephew, your friend or your companion — so that we can finally end the suffering of police excessive force?” 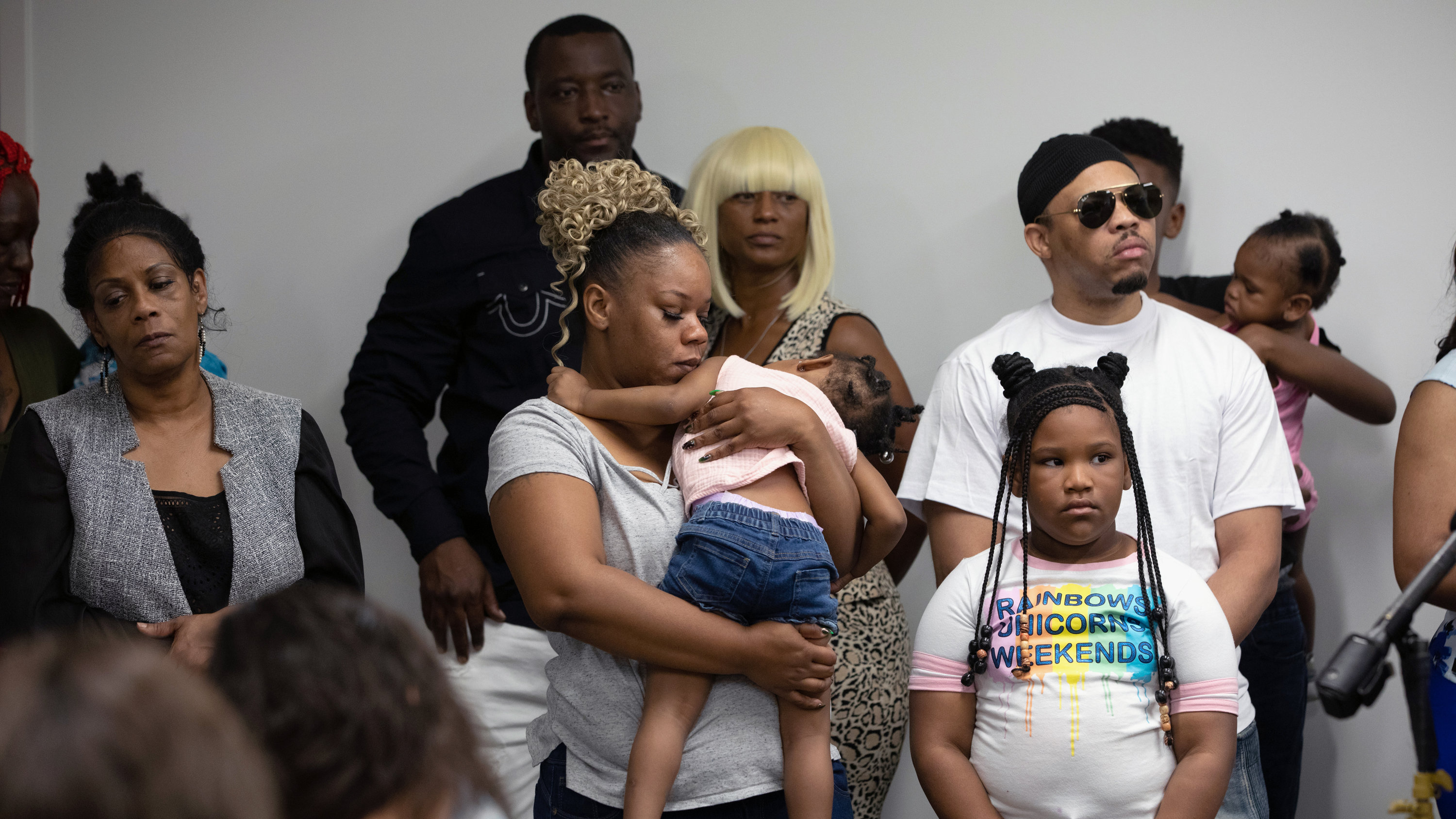 The family of Rayshard Brooks held a news conference in response to his killing, the latest to stir outrage over deadly violence by the police against African-Americans.CreditCredit…Dustin Chambers/Getty Images

According to the police account, two officers responded to a 911 call about a motorist who was asleep in his car and blocking the drive-through lane. Their initial conversations with him were respectful and even intimate, with Mr. Brooks describing how he had been celebrating a daughter’s birthday earlier in the night.

Garrett Rolfe, the now fired police officer, chased close behind, and while Mr. Brooks was running, he lifted the Taser toward Mr. Rolfe and fired it. Mr. Rolfe pulled his handgun from its holster and fired. Mr. Brooks fell as cars idled in the drive-through lane.

On Saturday, as tensions in the city mounted, Ms. Bottoms criticized the shooting. She called for the firing of Mr. Rolfe, who is white, and announced that the chief, Erika Shields, would be replaced by an interim chief, Rodney Bryant, who is African-American.

The other police officer, Devin Brosnan, has been placed on administrative duty, officials said. Paul Howard, the local district attorney, is investigating the shooting but has not yet said whether charges would be brought in the case.

Mr. Bryant, the interim chief, appeared with Ms. Bottoms at the news conference, dressed not in a police uniform, but in a dark suit and bow tie. He spoke briefly, but the moment was dominated by Ms. Bottoms, whose name has been floated as being under consideration as a potential running mate for the presumptive Democratic nominee for president, Joseph R. Biden Jr.

Ms. Bottoms spoke with passion of the pain Mr. Brooks’s shooting had caused her, and on occasion fought back tears. Her father, Major Lance, was a minor R&B star who had spent time in prison on drug charges, and Ms. Bottoms has often spoken of her family’s story as she has sought to make criminal justice reform a key policy goal.

On Monday, it was no different.

“My anger and frustration matches theirs,” she said of the protesters. “The difference is that I am using the bully pulpit that I have as mayor to effectuate long-lasting change in the city.”