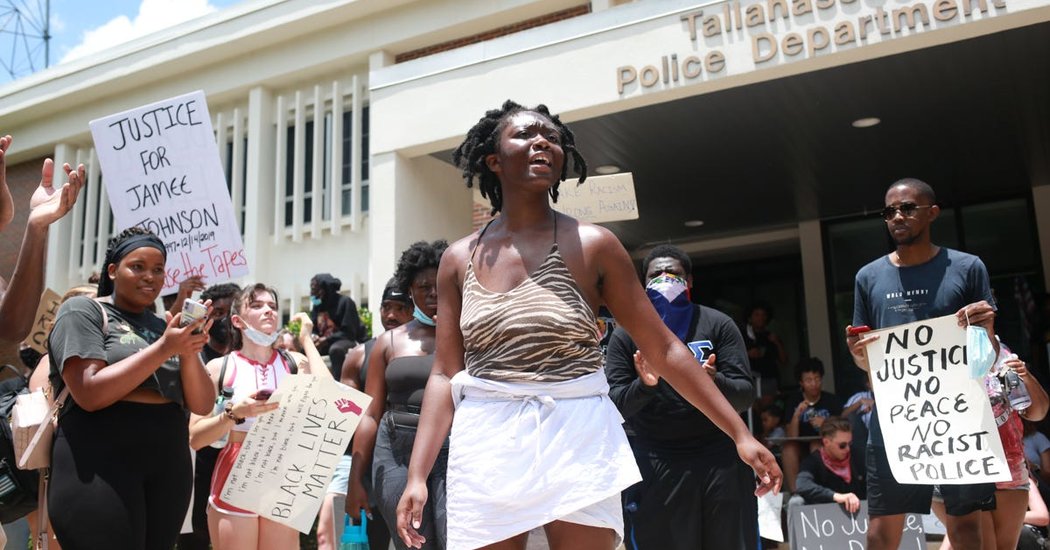 A 19-year-old Black Lives Matter activist whose disappearance this month led to a desperate search after she sent a series of tweets describing a sexual assault has been found dead in Tallahassee, Fla., the police said Monday.

The activist, Oluwatoyin Salau, was one of two women whose bodies were discovered in an area southeast of the city on Saturday evening, the police said. Both the deaths were being investigated as homicides, the police said, and a suspect, Aaron Glee Jr., 49, was in custody.

The other victim was identified as Victoria Sims, 75, an AARP volunteer. The authorities provided few details and did not say how the women had died or what connection, if any, they had to each other or the suspect. Mr. Glee has not yet been appointed an attorney, the Leon County Court said.

Ms. Salau was last seen on June 6, according to the police, and friends and fellow activists raised concerns about her well-being after she wrote a number of alarming posts on Twitter that day in which she described being sexually assaulted by a man who had offered her a lift and a place to stay.

She had recently gained attention as a prominent voice in protests in Tallahassee after the death of George Floyd in police custody led to a national reckoning over racism and police violence. Videos posted to social media showed Ms. Salau making impassioned speeches in support of the Black Lives Matter movement.

Ms. Salau took part in demonstrations alongside the Tallahassee Community Action Committee, said Trish Brown, one of the founding members of the organization, which is dedicated to fighting systemic racism.

“She was a strong, young black female leader to me, and a powerful speaker,” Ms. Brown said.

“I feel like something was snatched away from me,” Ms. Brown said.

Ana Sanz-Saumeth, a Black Lives Matter activist from Miami who met Ms. Salau during the recent protests, said organizers in Tallahassee spoke about “how powerful her words were, how motivated she was to be more involved in the movement and share that activism with those around her.”

“She was very much a resilient person,” she added.

Black Lives Matter activists and supporters across the United States flooded social media on Monday with pictures and videos of Ms. Salau, with many pledging to continue protesting and demonstrating in her name.

For Ms. Brown, Ms. Salau’s death was another heartbreaking reminder of the need to keep advocating for justice for African-Americans.

“She humbled me. I’m going to try to live to do the good work that I have been continuing to do, but harder and harder,” Ms. Brown said. “I’m not going to stop until we get this right.”