Portraits of Families in Protest

After the death of George Floyd, whose neck was pinned under a police officer’s knee for nearly nine minutes, Palmer had been fielding tough questions from his 5-year-old son, Caldwell, such as, “Why are white people mean to black people?”

“What does it say about where we are in this country that a 5-year-old is posing questions like that?” said Palmer, 44, a divinity student in Washington, D.C. “That’s the type of thing that can harden a person.”

Palmer said he tried to explain to his son that it’s not about black and white: It’s about equality and inequality, justice and injustice.

When Palmer suggested that his family protest together, joining in the national movement against systemic racism, Middleton hesitated.

“I didn’t want to go at first ’cause it was scary,” he said. “I didn’t want what happened to George Floyd to happen to me and my dad.”

Cheriss May, Palmer’s cousin, said she was heartbroken after hearing how her young relatives were processing the news of Floyd’s death.

But when the Palmer family went out on their first protest together, she said it became a teachable moment.

Lyssa Hargrove protesting with her son, Cayden, 13, and daughter Calysse, 8. Hargrove, who had never protested before, said that afterward she felt less weary than she had in weeks.

On June 1, Palmer and Middleton marched several blocks from their home in northeast Washington, D.C., to the busy intersection of Rhode Island Avenue and 4th Street, where they stood in the median holding signs that read: “A Man was Lynched.”

May, a freelance photojournalist who also lives in Washington, picked up her camera and began documenting her family, and several of the families who joined them.

“The family protest showed kids that everyone can do something, and there are more people who will support you than there are against you,” said May, who also teaches visual communications at Howard University. “You can do something right where you live, and what starts as a small gesture can grow to a powerful movement.” 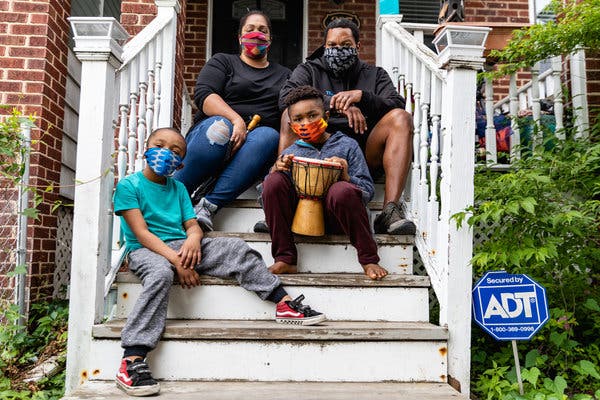 J. Jioni Palmer, his wife, Ashli, and their sons, Caldwell, 5, left, and Middleton, 8.Credit…Cheriss May

On the next day of the protest, Caldwell and Palmer’s wife, Ashli, joined. They continued to go out every morning at 8:45 a.m. By the third day, there were at least 21 other people, Palmer said, many of them children. On the last day, June 6, around 60 people joined.

Middleton said he felt safer and calmer as more of their friends and neighbors came to protest alongside them.

“It made me learn that a lot of people cared,” he said. “I wasn’t afraid anymore.”

Here are the stories of four of the other families who joined them.

Councilman Robert White, Jr., and his wife, Christy, with their daughters Madison, 3, and Monroe, 1. Credit…Cheriss May

Councilman Robert White, Jr., 38, of Washington, D.C., had been looking for an age-appropriate way to get his kids involved in the national movement, especially his 3-year-old, Madison.

So instead of joining the thousands of protesters gathering near the White House, he and Madison joined Palmer, a friend, near Rhode Island Avenue.

“It has allowed us as a family to expose our daughter at a young age to the importance of racial justice and equality, and really have a deep conversation about what that means,” he said.

Madison carried a homemade sign she helped make that read, “Justice For My Ancestors.”

Christy White, 38, a lawyer and the councilman’s wife, said it’s important for everyone, from the smallest to the oldest, to feel like they have a voice. Madison appears to have gotten the message.

“Whenever anyone says anything about protests, she talks about the protests that she went to with her dad and she tells people that she protests for justice,” Christy said. “I think it’s been a really positive experience for her.”

Lyssa Hargrove and her husband, Casey, with their three children: Cayden, 13, Calysse, 8, and Lake, 5.Credit…Cheriss May

Lyssa Hargrove, 43, a mother-of-three in Laurel, Md., who works in external affairs for the government, had been feeling weary for the last few weeks.

“It was not just George Floyd, although I think that was the straw that broke the camel’s back,” Hargrove said.

The combination of work stressors, quarantine, family illness and the latest videos of police violence had lead to a feeling of heaviness, she said.

Joining a protest was her son’s idea.

Initially, he said, “I felt kind of nervous,” but then he discovered that “people were showing us love.” Strangers brought them water and honked in support as they drove by, or raised a fist in solidarity.

When Hargrove joined Palmer’s family on June 1, she said, it was the first time she had ever participated in a protest.

“I felt much better every time I was out there,” said Hargrove, who joined Palmer’s protest on three different days. “It was just a really supportive environment, but it also made me feel like I was expressing myself, because by this time I had so much frustration and anger from so many different things.”

Dan Metcalf and his wife, Kathy Peacock, with their sons Finn, 9, left, and Miles, 7. Credit…Cheriss May

Dan Metcalf, 41, grabbed a couple of “Black Lives Matter” signs from their yard to join the protest. He brought along his two sons, Miles, 7, and Finn, 9.

At one point, the police approached their group.

“First I thought they were going to arrest Jioni, Middleton’s father,” said Finn, who is best friends with Middleton. But then he realized the police were actually there to help direct traffic and block the lanes closest to all of the protesters to help keep them safe.

Metcalf said it was important to teach his boys that this type of activism is part of being a good citizen.

“I think all of us — and I’m getting a little choked up right now — just feel so powerless under these circumstances,” he said. “And hopefully we can do more, but you start by committing to something small that you can do when you’re faced with something huge.”

Keith Rushing and his wife, Elena Gaona, with their daughters, Maya, 10, and Fabiola, 6. Credit…Cheriss May

Keith Rushing, 55, said he joined Palmer’s protest because he doesn’t want to shield his daughters and hopes to show them that protesting is not only good, it’s essential.

Although racism is prevalent throughout society, he added, there’s a tradition of “fighting and winning.”

“It only happens when people step up and fight and protest and demand,” he said. “It’s not going to just happen because of the passage of time. It’s because people actively commit.”

His oldest daughter, Maya, 10, made a sign to carry that read, in part, “Black Lives are Precious.”

“When you just say ‘Oh yeah, I think black lives are precious, too,’ and you don’t act like it, it’s like, you don’t really think that,” Maya said. “It’s not fair to think that you can kill somebody because of the color of their skin.”

Her sister, Fabiola, 6, also participated, even though the passersby who honked in support could be a little loud, she said.

“I’m still out there because the longer you stay the bigger the change it will make,” Fabiola said.

The Palmer family is now planning a Father’s March for Justice and Equity that will be held on June 20.