WASHINGTON — Senate Republicans signaled on Tuesday that they were coalescing around a narrow set of law enforcement reforms as President Trump signed an executive order to encourage — but not mandate — that police departments alter their behavior, setting up an election-year clash with Democrats who are pushing for sweeping changes to address systemic racism in policing.

On Capitol Hill and at the White House, the moves by Republicans suggested that despite nationwide protests against police brutality and growing public sentiment for overhauling law enforcement, they were unwilling to accept the far-reaching federal measures that Democrats had proposed to make it easier to track and prosecute police misconduct, change standards for using force and institute anti-bias requirements across the country.

“The House version is going nowhere in the Senate,” said Senator Mitch McConnell, Republican of Kentucky and the majority leader. “It’s basically typical Democratic overreach to try to control everything in Washington.”

Instead, Republicans said they could vote as early as next week on their own legislation, which is set to be unveiled Wednesday, as they struggle to reach consensus about how to respond to the outpouring of public sentiment in favor of change. But Mr. McConnell was noncommittal about whether the Senate would take up the bill, which is being spearheaded by Senator Tim Scott, Republican of South Carolina, before lawmakers leave for the July 4 recess.

The measure will come on the heels of Mr. Trump’s executive order, which encouraged overhauling policing, like new restrictions on chokeholds and adherence to high training standards for officers. But the measure does not mandate those initiatives and omits any mention of race or discrimination, the central issues that have animated the current calls for revamping law enforcement after the killings of black Americans by the police.

Speaking in the Rose Garden of the White House and flanked by several uniformed police officials, Mr. Trump depicted police misconduct as rare and officers as embattled heroes who must be defended. Through his order, Mr. Trump said he was “encouraging” police departments across the nation “to adopt the highest professional standards to serve their communities.”

Activists and Democrats were quick to criticize the action as a mostly symbolic measure that did little to address what they called structural problems plaguing police forces that have led to brutality and death for black Americans.

“The executive order lacks meaningful, mandatory accountability measures to end misconduct,” said Speaker Nancy Pelosi of California, who urged the administration and Republicans to instead consider Democrats’ legislative proposal. “During this moment of national anguish, we must insist on bold change, not meekly surrender to the bare minimum.”

Later, at a Senate hearing, Republicans and Democrats grappled with the scope of the changes.

Senator John Cornyn, Republican of Texas, pressed witnesses on their assertions about systemic racism in policing, asking at one point, “Do you believe that basically all Americans are racist?”

Vanita Gupta, the president and chief executive of the Leadership Conference on Civil and Human Rights, responded, “I think we all have implicit bias and racial bias, yes I do,” eliciting a “wow” from Mr. Cornyn.

“I think that we are an amazing country that strives to be better every single day,” Ms. Gupta added. “It’s why I went into government, to make a more perfect union.”

Mr. Cornyn replied, “You lost me when you want to take the acts of a few misguided, perhaps malicious, individuals and ascribe that to all Americans.”

In other moments, Republicans appeared to be weighing how far to go with their proposal.

S. Lee Merritt, a lawyer for the family of Ahmaud Arbery, a black man from Georgia who was killed while jogging after being chased by armed white residents, explained the challenges faced by the families he represents because of qualified immunity, which shields police officers from lawsuits.

The bill proposed by Democrats would change the doctrine, but Mr. Scott has ruled out doing so. After Mr. Merritt’s testimony, Senator Cory Booker, Democrat of New Jersey, urged Republicans to consider modifications to guarantee consequences for misconduct.

“I wrote it down,” said Senator Lindsey Graham, Republican of South Carolina and the chairman of the Senate Judiciary Committee.

Mr. Trump’s order does not include any such modifications.

The order instructs the Justice Department to provide federal grant money only to state and local law enforcement agencies that have been, or are seeking to be, credentialed by independent bodies certified by the attorney general. The criteria include “de-escalation techniques” to help prevent routine arrests from suddenly turning violent and early-warning systems to identify problematic officers. 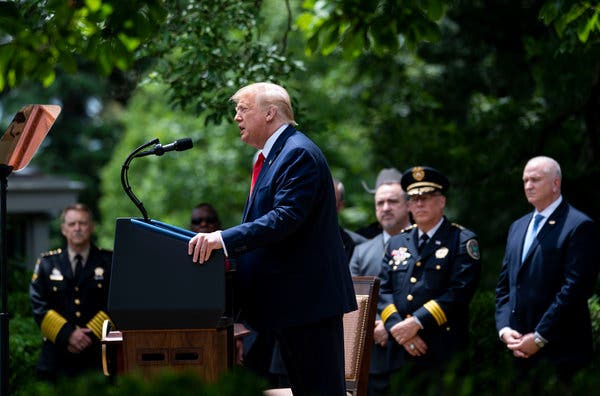 The executive order President Trump announced in the Rose Garden on Tuesday encourages — but does not mandate — police departments to alter their behavior,Credit…Doug Mills/The New York Times

It also requires that law enforcement agencies seeking grants prohibit the use of chokeholds, “except in those situations where the use of deadly force is allowed by law.” That is a potentially major exception: Activists say police officers abuse legal loopholes allowing them to use deadly force when they are threatened. Mr. Trump added that his administration was studying new nonlethal weapons that might be distributed to police departments.

The order also directs the attorney general to create a database to track complaints filed against police officers, who sometimes move from department to department without such records accompanying them, in effect granting them a clean slate. It also instructs the Justice Department and the Department of Health and Human Services to study and make recommendations about ways to support police officers responding to calls involving mental health, homelessness, and addiction with trained social workers.

Mr. Trump said that he had met privately just before the event with the families of nine black men and women who were killed by the police, and vowed to “fight for justice for all of our people,” adding, “your loved ones will not have died in vain.”

“There were a lot of tears, there was a lot of emotion,” the White House press secretary, Kayleigh McEnany, told reporters later in the day. “The president was devastated.”

Ja’Ron Smith, a White House domestic policy adviser, said the administration had “quietly worked with these families” to draft the executive order. He called their absence from the Rose Garden event “a mutual decision, because it really wasn’t about doing a photo opportunity” and said that “some civil rights groups have even attacked them for coming.”

It was unclear precisely what groups he was referring to. But Mr. Merritt defended their meeting with Mr. Trump. The families, he later said during the Senate hearing, were all promised federal investigations into their loved ones.

In his remarks, the president said nothing about racism and derided calls for more sweeping change as a threat to law and order.

“I strongly oppose the radical and dangerous efforts to defund, dismantle and dissolve our police departments,” Mr. Trump said. “Law and order must be further restored nationwide,” he added, citing instances of looting and arson on the margins of the national protests against racial injustice. “Americans want law and order, they demand law and order.”

Mr. Trump was joined in the Rose Garden by Mr. McConnell and Mr. Scott, along with other Republicans, and encouraged both chambers to “come up with a solution that goes even beyond what we’re signing today.”

While Mr. Scott and other lawmakers were still drafting the legislation, some Republicans voiced concern about it. Senator Mike Braun of Indiana told reporters that he planned to introduced his own bill to address qualified immunity.

But at his weekly news conference, Mr. McConnell signaled that he intended to push ahead with Mr. Scott’s legislation and all but dared Democrats to block it on the Senate floor. Senator Chuck Schumer of New York, the minority leader, declined to comment on the proposal until it was unveiled Wednesday.

“It will really be up to them to decide how they want to handle this,” Mr. McConnell said. “They can either shoot it down as insufficient or be willing to take the risk to go to the bill and see what changes, if any, we can all agree to.”