Documentary filmmaker Ami Horowitz went to Seattle‘s Capitol Hill Organized Protest area recently and shared with Fox News footage of his interaction with Jaiden Grayson and other leaders of the movement.

“Every day that I show up here, I’m not here to peacefully protest,” Grayson told the “U.N. Me” filmmaker, who also embedded himself in Minneapolis protests earlier this month.

“I’m here to disrupt until my demands are met,” Grayson continued. “You cannot rebuild until you break it all the way down.”

The CHOP group has blocked off six city blocks in downtown Seattle, where the East Precinct is located, as an act of protest for the police-involved death of George Floyd on May 25. On Tuesday, protesters reached an agreement with the city to reduce the occupied area to three blocks and to allow traffic. The agreement came a day after the Seattle City Council voted to ban police from using chokeholds and crowd-control devices like tear gas and pepper spray.

Grayson said that they will not stop until their demands are met “by any means necessary.” 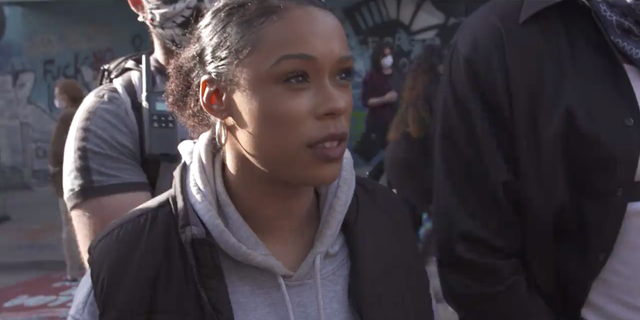 Jaiden Grayson, one of the CHOP organizers, speaks to documentary filmmaker Ami Horowitz.

“It’s not a slogan. It’s not even a warning,” Grayson said. “I’m letting people know what comes next.”

“If the Seattle Police Department turns in their badges, we’ll have made a move forward,” Grayson said.

The group has published a list of demands for the city council and mayor, including abolishing the police, prisons, courts and criminal justice system “as we know it today.”

“The unraveling of that system is also what will fuel the black minds in the black bodies that will recreate a new world,” she told Horowitz in the video.

Grayson, who identified herself as “an African brought to America,” commended Horowitz. “I don’t understand why more journalists are not asking those questions. We run to black people the minute that they’re killed and we have been seeing them be killed for so long that the PTSD from that is unbelievable. You have people still b–ching about 9/11, unbelievable. One act of terror.”

Every day that I show up here, I’m not here to peacefully protest. I’m here to disrupt until my demands are met.

A man who said he was an original member of the Seattle Black Panther Party explained that police are needed and that the movement had “taken a move in the wrong direction.”

“Shutting down the streets and calling it some kind of autonomous zone is a bunch of bulls–t,” he said in the footage.

But the majority of those gathered at what Horowitz called a “Confederacy of Dunces,” didn’t share that sentiment.

“If there’s no change, there might be a lot more destroying until there is!” a hooded man wearing sunglasses and a black face cover, told him, “but I think some destruction and looting kinda sends the message to people and breaking their s–t is justified.”

Another said, “‘F–k the property. f–k the consumption, f–k capitalism.”

A woman then said, “white people owned slaves so f–k them.”

One protester told him “a super devout Christian guy came here and he was spouting about God is glory, he hates homosexuals, he hates abortion. He was sitting there, you know, spreading very divisive words and he was allowed to do it. Nobody hit him. He didn’t get tackled to the ground.”

A bystander can be heard replying, “That Christian guy did get tackled. They had him on the ground choking him out.”

Horowitz has previously filmed an expose on the United Nations’ inability to live up to its stated purpose and founding ideals of a more peaceful world. Another video of his led to an executive order by President Trump. He taped a Middle East conference co-hosted by Duke University and UNC-Chapel Hill that was paid for in large part by the government. During the event, a rapper performed an anti-Semitic song. The Department of Education issued a lawsuit against the universities and Trump signed an order against anti-Semitism on college campuses.

In 2016, Horowitz filmed a short video amid the Black Lives Matter movement asking predominantly black and Hispanic residents in Harlem, N.Y., if cops’ lives matter, too. He also asked white people in gentrified Brooklyn if violence was justified.

The White House Called a News Conference. Trump Turned It Into a Meandering Monologue.