The Dress Codes of the Uprising

Amid all the marches and protests for social justice that took place over the weekend, as they have every day since George Floyd was killed while in police custody on May 25, two stood out: the thousands dressed in white who thronged Eastern Parkway in Brooklyn on Sunday in support of black trans lives; and, farther south, the thousands gathered in Columbia, S.C., “fully adorned in their Sunday best,” according to one of the organizers of that city’s Million Man March for racial justice.

They wore suits in bright red, shell pink, dove gray and burgundy; jewel-toned ties and plaid bow ties; striped button-up shirts and crisp white ones. Sundresses and tulle dresses and sleeveless silk tops. And they were gussied up on purpose.

From its inception, the march organizers had specified: “Come in dress attire please.” The point being, said Leo Jones, who came up with the idea for Columbia’s Million Man March, to “reframe the narrative and build a sense of joy in our community to see us looking so well, and marching with such pride.” 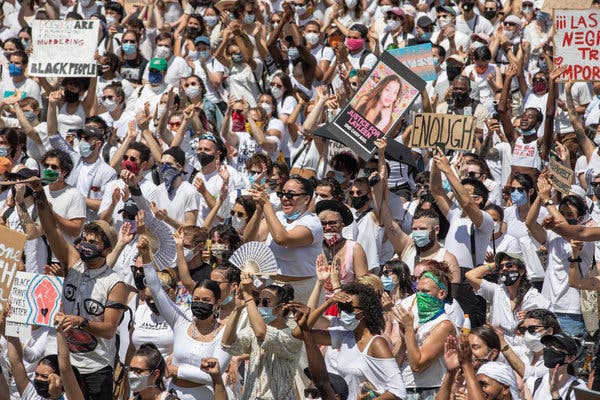 Protesters gathered outside the Brooklyn Museum on June 14 to call attention to police violence against Black transgender people.Credit…Demetrius Freeman for The New York Times

Almost every protest movement has its visual signifiers: images etched in the collective memory that crystallize the causes for which they were fought. The white dresses of the suffragists and the women’s rights movements. The neat black suits and white button-up shirts of the original civil rights protests. The Black Panthers in leathers and turtlenecks. The followers of Mahatma Gandhi in Gandhi caps and khadi shirts. The sans-culottes of the French Revolution and the yellow vests of the French revolt centuries later.

But the current moment, in part because of its extraordinary reach and multiracial, multinational dimensions, as well as the fact it has been organized largely over social media without a strategic centralized body, has been notably diffuse. As Robin Givhan wrote in The Washington Post, “There’s no cohesion in the look of the marching multitudes.”

They have been resplendent in the uniform of no uniform.

And what both the march in Brooklyn and the march in South Carolina suggest is that the iconography of the current upheaval is beginning to evolve and coalesce.

On June 8, members of the House of Representatives knelt in silence for eight minutes and 46 seconds to honor George Floyd.Credit…Chip Somodevilla/Getty Images

The Fashion Messages That Failed

To be fair, against the backdrop of everything-goes-activism, attempts to pantomime a message through clothes can seem risible. This was never more true than when members of the House of Representatives took a knee amid the marble walls of Emancipation Hall to introduce the Justice in Policing Act of 2020 wearing matching kente cloth stoles provided by the Congressional Black Caucus.

The impulse was clearly genuine, and with precedent in the halls of government. Caucus members wore a similar accessory at the State of the Union in 2018 in silent visual protest against President Trump’s offensive statements about African countries, and the white suits now regularly worn by congresswomen to send a message are another example of unity through clothing that has been notably effective.

But this time it fell flat. In the end it connected not to the heritage of the civil rights movement but rather to a different political tradition: the lawmaker in cultural costume.

And like Canadian Prime Minister Justin Trudeau’s heavily embroidered gold sherwani worn on a state trip to India, which elicited comparisons to a bad Bollywood star, or the class photos taken during the Asian-Pacific Economic Cooperation forum featuring world leaders in local dress that came to be known as “silly shirts,” the gesture was widely mocked.

If you are going to use clothing to underscore a message, you’d better understand exactly what message you are sending.

As the social justice movement enters its second phase, however, segueing from an eruption of sheer anguish and frustration to more specific demands and policy changes, the look is beginning to change, too. The organizers of the South Carolina march specifically used fashion to communicate a set of values and implicit references.

Their aim was to connect to the civil rights leaders of the past and pay them homage; to repudiate old racial stereotypes and attempts by some media outlets and the far right to paint them as antifa (a movement that has its own all-black dress code); to offer a silent riposte to the only other uniform otherwise on view: that of the National Guard and the police.

Indeed, the militaristic look of law enforcement style has been a potent theme in the last few weeks, functioning as a perhaps unintended symbol of much of what the protests are about, including aggression against civilians and the use of unnecessary force.

Washington State Patrol officers in riot gear at a protest in Seattle on June 1.Credit…Lindsey Wasson/Reuters

In their camouflage or riot gear, with hard black plastic armor reminiscent of storm troopers, their faces obscured by masks and sunglasses, the police force has often resembled nothing so much as the representatives of a dictatorship.

“I suspect it has inspired some of the outpouring of support in other countries that may not have our racial problems, but have their own history of authoritarianism,” Mr. Ford said. “They recognize that image and what it represents.”

The Columbia march was not the first gathering to adopt more formal dress. On June 4, a demonstration in remembrance of George Floyd in Harlem was characterized by sharply tailored suits and ties in bright colors and ankara prints, worn both as a mark of respect for the life of the man they were honoring and to shape public understanding.

But the South Carolina event took the idea a step further, using clothing not just to influence perception but also to reflect what the organizers see as a more specific agenda, which includes voter registration, census taking and singleness of principle.

Columbia, which is about 40 percent African-American, experienced its own shooting on April 8 when police killed a 17-year-old, Joshua Dariandre Ruffin, a case currently being reviewed by local prosecutors.

“For us this was a passing-of-the-baton moment and a time to stand together in a nonmilitaristic way,” Mr. Eades said.

The idea began, said Mr. Jones, 27, the founder of a media agency, when he saw how a protest in Columbia on May 30 was covered by the media, with heavy emphasis on the riots at the end, conflating the abuses of a few with the actions and pain of the many.

He connected with other organizers, who include Tyrieck Davis Newton, 22, a photographer and videographer; Sterling Jackson, 27, who runs his own entertainment public relations agency; Aisa Blue Davis, 21, a college student; and Mr. Eades, 29, a program coordinator at the South Carolina Department of Social Services. They decided to draw a direct line between their plans and the Million Man March of 1995, organized by Louis Farrakhan on the National Mall.

They posted on Facebook and Instagram, reached out to the Nation of Islam for permission to make references to the march, and coordinated with the mayor’s office and the local police force. Local restaurants volunteered to donate water and fruit; businesses gave face masks.

Mr. Eades said he understood that wearing suits could be seen as attempting to fit into the very system the protests would like to not just reform but also, in some cases, tear down. But, he added: “As a young African-American man, it was powerful to me to see a well-adorned person who had my skin color. To see how he carried himself, and how he moved. It’s our way of wanting to step forward.”

There is a long tradition of Sunday best in the African-American community dating back decades before the civil rights movement, Mr. Ford said. In that sense, he said, the organizers of the march were not playing respectability politics as much as declaring ownership over their own history.

It was, he said, “a repudiation of stereotype and white supremacy. It’s not copying white power structures. It’s a powerful statement on its own.”

A protest march in Harlem on June 4.Credit…Simbarashe Cha for The New York Times

Perhaps this is why the idea of adopting a dressed-up march dress code is spreading, even as summer and higher temperatures loom. Mr. Jackson said he and his fellow organizers have had inquiries about creating similar marches from Charlotte, N.C.; Richmond, Va; and Charleston, S.C.

“I hope it does catch on,” said Mayor Stephen K. Benjamin of Columbia, who spoke on Sunday. “I think optics like this will help move the ball down the field.”

To a point, Mr. Eades said, that it is “in the history books one day, and a young person may see it, as I once saw images from the civil rights movement, and say: ‘This is who we are, and who we were.’”

Valentina Sampaio Is the First Transgender Model for Sports Illustrated

Valentina Sampaio made history on Friday, becoming the first transgender woman to be featured in the Sports Illustrated swimsuit issue,...

A #MeToo Moment Emerges for Military Women After Soldier’s Killing

WASHINGTON — As the #MeToo movement gained ground, propelled by stories of women in Hollywood, the news media, restaurants and...