When Thomas F. Freeman had to speak in public as a youth, he would burst into tears. Gripped by stage fright, he sobbed between words, barely able to complete a sentence.

If he was sermonizing in church, as he did since 9, his listeners “thought he had been struck by the Spirit because he was crying,” his daughter, Dr. Carlotta Freeman, recalled with a chuckle. “He was scared to death.”

By forcing himself to keep talking, forthrightly and by enunciating each word, he soon conquered his fear — an early lesson in learning by doing.

That became his mantra. And over time, as he wove together his power as a preacher and his skills as an educator, Dr. Freeman went on to establish, build and coach the award-winning debate team at Texas Southern University, a historically black university in Houston, where he reigned as the chief of forensics — the study and practice of public speaking and debate — for an astonishing six decades.

He was 100 when he died on June 6 at a hospital in Houston, his daughter said. Dr. Freeman had achieved a level of renown usually reserved for football coaches, partly because of his roster of stellar students.

One was an 18-year-old named Martin Luther King Jr. Dr. Freeman, who was a guest lecturer at Morehouse College in 1947, did not recall teaching him until Dr. King saw him years later at a restaurant and went up and introduced himself.

Another was the Texas congresswoman Barbara Jordan, she of the rolling cadences and moral authority, who transfixed the nation in 1974 with her argument for the impeachment of President Richard M. Nixon. 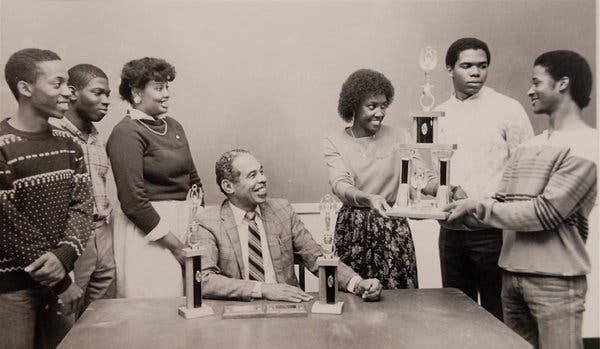 Dr. Freeman with his award-winning Texas Southern debate team in 1985. “You don’t remember me,” the Rev. Dr. Martin Luther King Jr. once told him, “but I remember you.”Credit…via Texas Southern University

And when Denzel Washington was making the movie “The Great Debaters” (2007), about a debate coach at a small Texas college, he and the cast traveled to Houston for debate boot camp with Dr. Freeman.

Dr. Freeman joined Texas Southern (then called Texas State University for Negroes) in 1949 to teach philosophy. As part of a course in logic, he assigned his students to a debate. He had planned to return to his native Virginia to be a preacher, but university officials were so impressed with the exercise, they begged him to stay and form a debate team.

He stayed until he officially retired in 2013. Still, as professor emeritus, he continued to go to his office, and even at 100 he made himself available to students until March, when the coronavirus pandemic shut down the university.

His daughter said that he had taught students “to enunciate, regulate your tonal quality, pace your speech, and use your breath and emotion so that when you do speak, your words come alive.”

He was a rigorous mentor and demanded excellence, as embodied in the team’s unofficial motto: “What we do, we do well; what we don’t do well, we don’t do at all.”

The team quickly rose to national prominence and became an enduring source of prestige for the university. During his tenure, it won scores of championships and amassed more than 2,000 trophies.

“I cannot overestimate the impact and influence that Dr. Freeman had on my life,” Representative Jordan told The New York Times in 1992. “He stretches your mind. He places you on your own, teaches you to stand on your feet, think, and open your mouth and talk.”

In 1956, she was part of a Texas Southern team that debated one from Harvard. The question at hand was whether nonagricultural industries should guarantee their employees an annual wage. Texas, which argued in the affirmative, won by two points.

Dr. Freeman, kneeling at center, with the Texas Southern debate team after it won trophies in an international competition in 1990. The team amassed more than 2,000 trophies under his leadership.Credit…via Texas Southern University

Dr. Freeman was a father figure to his students, many of whom were the first in their families to attend college, and he exposed them to the wider world, treating them to fine restaurants after tournaments and taking them to competitions overseas.

“Being in his class wasn’t only an educational experience but a spiritual and social experience,” Gloria Baptise-Roberts, a former student who succeeded him as coach, said in a phone interview.

“But it was always about the words,” she said. “He captivated you with the way he told a story, the energy he put into the delivery. That was his greatest art.”

Thomas Franklin Freeman was born on June 27, 1919, in Richmond, Va. His father, Louis Hyme Freeman, ran a produce store, and his mother, Louise Elizabeth (Willis) Freeman, ran the household. They had 15 children, three of whom did not survive into adulthood.

Thomas grew up gardening vegetables for his father’s produce business. All the children were required to take piano lessons, go to the local Baptist church and attend college.

“I had the conviction then as I have now that God wanted me to carry the word, and that is what I do,” he told James H. Ford, author of “The Peddler’s Son” (2016), a biography of Dr. Freeman.

Dr. Freeman was 15 when he enrolled at Virginia Union University (and started a lifelong tradition of wearing dapper suits and ties). He graduated in 1939 with a bachelor’s degree in English.

“I had the conviction then as I have now that God wanted me to carry the word, and that is what I do,” Dr. Freeman once said.  Credit…via Texas Southern University

From there he attended Andover Newton Theological Seminary in Newton, Mass. The school had long been closed to African Americans but changed its policy three years before he arrived. One of four black students in his class, he became the top student of the entire class before graduating in 1942.

Dr. Freeman studied briefly at Harvard and Boston University and received his doctorate in homiletics (the art of preaching) from the University of Chicago Divinity School in 1948.

He met Clarice Estell at church in 1942, and they married in 1953. She was a teacher in the Houston public schools, gave private piano lessons and became a voice coach. (Among her students was the soprano Leontyne Price.)

In addition to their daughter, Carlotta, Dr. Freeman is survived by his wife; two sons, Thomas F. Jr. and Carter; six grandchildren; two great-grandchildren; and a sister, Elsie F. Lewis.

In 2009, Texas Southern’s board of regents named a new honors college after Dr. Freeman. He taught religion at Rice University, also in Houston, for more than 20 years. Rice was founded as a segregated institution, and Dr. Freeman was among its first black lecturers. He also taught speech and English as an adjunct professor at Houston Community College.

All the while, he served as pastor of Mt. Horem Baptist Church in Houston, preaching weekly for 69 years.

And he continued to believe that everyone had potential, even if they showed little promise.

“You are not lost unless you think you are lost,” he would say, according to Mr. Ford’s book. “You may be late in your development, but as long as there is life, there is hope.”

Ghislaine Maxwell has hired the former prosecutor who helped bring down drug kingpin Joaquin “El Chapo” Guzman to try to get her...