WASHINGTON — Officials in Tulsa, Okla., are warning that President Trump’s planned campaign rally on Saturday — his first in over three months — is likely to worsen an already troubling spike in coronavirus infections and could become a disastrous “super spreader.”

They are pleading with the Trump campaign to cancel the event, slated for a 20,000-person indoor arena — or at least move it outdoors.

“It’s the perfect storm of potential over-the-top disease transmission,” said Bruce Dart, the executive director of the Tulsa health department. “It’s a perfect storm that we can’t afford to have.”

Tulsa County, which includes the city of Tulsa, tallied 89 new coronavirus cases on Monday, its one-day high since the virus’s outbreak, according to the Tulsa Area Emergency Management Agency. The number of active coronavirus cases climbed to 532 from 188 in a one-week period, a 182 percent increase; hospitalizations with Covid-19 almost doubled.

That spike has local officials and public health experts concerned about welcoming the nation’s first indoor mass gathering since Mr. Trump declared a national emergency in mid-March, an influx of thousands of people interacting inside and outside, amounting to a sprawling coronavirus petri dish.

Ms. Keith said that the rally was likely to draw gawkers and protests outside the BOK Center, the arena where the event is planned. A large overflow crowd could be accommodated at a convention center a block away, where Mr. Trump said on Monday that 40,000 others would congregate for his speech. The president also asserted Monday on Twitter that “Almost One Million people” had requested tickets for the event.

Epidemiologists are envisioning a worst-case scenario for viral spread. The novel coronavirus can transmit through thousands of tiny respiratory droplets that hang in the air indoors, especially when people are talking loudly, laughing, singing and sharing bathrooms.

The longer people linger in a contaminated area, the more virus particles they can inhale, and Mr. Trump’s political speeches often last more than an hour.

“That virus, I guarantee you, will be present at the event — someone will bring it,” said Dr. William Schaffner, an infectious disease expert at Vanderbilt University Medical Center. “The Covid virus knows no political affiliation. What it does love is large groups, indoors, close to each other for prolonged periods of time chanting and yelling.”

Mr. Trump said on Monday that criticism of the rally was the result of the news media “trying to Covid Shame us on our big Rallies.” Conservatives have claimed a double standard around large gatherings in recent weeks after Americans attended thousands of protests nationwide, often inches from one another, over the death of George Floyd.

The Trump campaign, which has required attendees to agree not to sue should they contract the virus at the rally, said Monday that it would take body temperatures and distribute masks and hand sanitizer. Those requirements may not be sufficient to stop the virus’s spread, which occurs even among people not showing symptoms, such as fevers and coughs.

“The campaign takes the health and safety of rallygoers seriously and is taking precautions to make the rally safe,” Erin Perrine, a spokeswoman for the campaign, said in a statement.

On Tuesday, four plaintiffs sued ASM Global, which manages events at the BOK Center, labeling the rally a public nuisance and seeking an injunction that would require it to enforce the Centers for Disease Control and Prevention’s guidelines for large gatherings, including social distancing protocols. 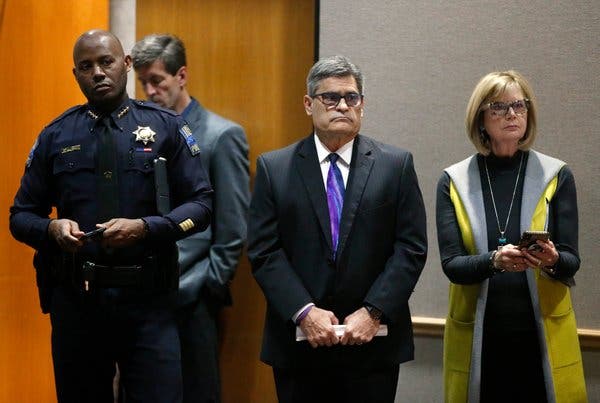 Rapid spread of the virus can occur at choir practice or birthday parties. At a restaurant in China in January, one diner infected with the novel coronavirus but not yet feeling sick appeared to have spread it to nine people around him, after one of the restaurant’s air-conditioners apparently blew the virus particles around the dining room.

A spokeswoman for the BOK Center did not respond to questions about any changes the building was making for the rally. The arena’s staff was furloughed at the onset of the pandemic, Ms. Keith said, adding that its older members could be in precarious positions if called back on Saturday.

The causes of Tulsa’s rise in cases are still being studied by local health officials. A spokeswoman for Tulsa’s health department said investigations of “recent outbreaks” were focused on “large indoor gatherings.”

“Like any other public health official, I’m a little angry,” Mr. Dart said about the rally. “Frankly, I’m afraid for a lot of people. It hurts my heart that we know this is a possibility and we’re doing it anyway. It’s like seeing the train wreck coming.”

Ms. Keith and Mr. Dart said they were particularly concerned about visitors from nearby states, several of which have recent spikes more severe than Oklahoma’s, including Texas, where the 2,166 coronavirus patients hospitalized on Friday were the most yet in the state.

“We can’t control whether they’re coming in from hot spots,” Ms. Keith said. “This is not about politics. This is about the insanity of our numbers.”

Oklahoma, which Mr. Trump won four years ago by 36 percentage points, began lifting restrictions on businesses on April 24 and moved into Phase 3 of its reopening on June 1, allowing summer camps to open and workplaces to return with full staffing levels.

But the state’s governor, Kevin Stitt, said Monday that he had asked Mr. Trump and Vice President Mike Pence, who plans to attend the rally, to consider a larger, outdoor venue to accommodate the number of people who have requested tickets to the event. Ms. Keith said she had had conversations throughout the weekend about alternative venues for the event.

“We’re going to make sure that people have hand sanitizers, that we do temperature screenings and also make masks available to people that are attending the event,” Mr. Pence said Tuesday morning on “Fox & Friends.” “But look, the freedom of speech, the right to peacefully assemble, is enshrined in the First Amendment of the Constitution. And the president and I are very confident that we’re going to be able to restart these rallies.”

Mr. Pence said Monday that cases of the virus there had dropped “precipitously” and that the state had “flattened the curve,” a reference to the desired shape of a graph of new cases. But data compiled by The New York Times shows an obvious and steep rise following the state’s reopening, making it one of 22 states where case counts were growing.

Two senior administration officials said that the White House coronavirus task force, which Mr. Pence leads, had not discussed the Saturday rally. But several of its members, including Dr. Anthony S. Fauci, the nation’s top infectious disease expert, have expressed worry in recent weeks about the health risks of large gatherings around the country, including the protests over Mr. Floyd’s death.