Why Andrea Jenkins Is Somber, but Optimistic

This article is part of our latest Pride special report, featuring L.G.B.T.Q. voices on the challenges and possibilities of these troubled times.

Andrea Jenkins has been making daily visits to the site where a police officer knelt on George Floyds neck for almost nine minutes. It’s not even two blocks from where she lives in South Minneapolis, where she is a councilwoman representing Ward 8. In 2017, Ms. Jenkins won with about 73 percent of the vote, becoming the first black, openly transgender woman to be elected to public office in the United States.

Growing up in Chicago in the 1960s, Ms. Jenkins was steeped in the city’s emerging Black Arts Movement and discovered her voice as a poet. She eventually moved to Minneapolis and served as a Council policy aide and oral historian for nearly two decades before becoming a city councilwoman. “That’s where I live, at the intersection of L.G.B.T. politics and racial injustice,” Ms. Jenkins said in a phone interview. “It’s front and center of my everyday.”

These are edited excerpts from our conversation earlier this month.

I wanted to talk about your platform of racial equity.

It hasn’t changed. The urgency of my methods was as hopeful and necessary as it is today. The problems that led to George Floyd being murdered have been present in Minneapolis, in Minnesota, in the United States of America, for a very, very long time. Since the beginning of this country.

Iyanna Dior, a black transgender woman, was beaten recently. Is there anything that’s being done to protect trans women?

CeCe McDonald was brutally attacked in this community in 2011 as well. And in defending herself, subsequently went to jail and was, with even further indignity, placed in a male facility. We are trying to keep people safe, but the whole notion of transphobia and racism — society has to wake up and deal with that. Your newspaper has to create messages that help to create understanding and awareness of these issues in these communities. All of us have a responsibility in that.

You won with 73 percent of the vote. Do you feel like there was a willingness for change when you came in?

Black Minnesotans may be doing better than some other communities, but the reality is that the white people in Minneapolis are doing so incredibly well, in terms of homeownership, income. We have the No. 1 parks system in the country. We have the No. 1 education system in the country. We have some of the best health care. This is the home of the Mayo Clinic. People here are working on curing the coronavirus, right? We got it going on. So the heights are so high, that it really exacerbates the gap. But the gaps are real, make no mistake.

What could change look like in the community in the next few years?

I really hope that change can and will look like a reimagined approach to public safety, where we are engaging community members and being able to respond to mental health crises, to domestic violence crises, to some of these heated situations where police officers encounter very, very difficult times. We want to see a new approach to public safety. We want to see a fair and equitable living wage, for people who all are considered now essential workers.

Here in Minneapolis, we do have a $15 minimum-wage requirement. But you can’t live off that in this community. So we need corporations to share the benefits that the work force has been providing for them for years. If you work eight hours a day, you should be able to pay your rent. We need to change the way we approach health care in this country, as we can see as evidenced through the coronavirus, when, if you lose your job, you lose your health care.

How does being a poet and historian inform your work?

I use poetry as a way to try to understand what’s going on around me. So if you read my poetry, it’s not deeply esoteric or contemplated, meditating on the beauty of a dandelion. It’s more dealing with the cultural and social issues that are surrounding us.

The Black Arts Movement informs my poetic sensibilities and, really, it’s the poetics of social justice and social change. It has been mostly focused on, I would say, the intersections of the African-American and people-of-color communities with the L.G.B.T.Q. communities. And through that, poetry has given me a platform to speak to the political and social issues that led me to running for political office.

You were very qualified by the time you ran. So do you also feel like, being a black trans woman, that you had to be above and beyond qualified?

As a black trans person, I’ve always felt compelled to try and to make sure that my qualifications were stellar and above what might be necessary to have, because most average trans people in this country make less than $10,000, particularly black trans women. 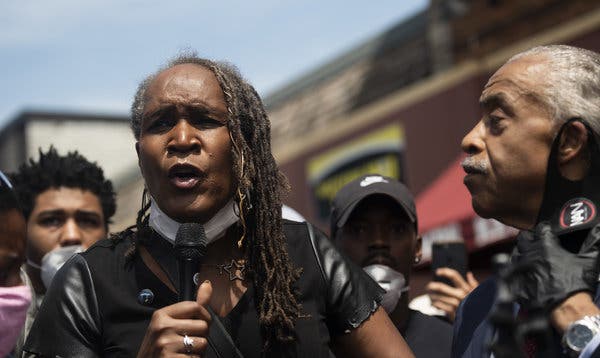 Ms. Jenkins spoke last month to a group outside of Cup Foods, where George Floyd was killed in Minneapolis. The Rev. Al Sharpton is at right.Credit…Stephen Maturen/Getty Images

And now you’re the vice president of the City Council. So what does that mean for your day-to-day life? Can you just walk me through what your day is like?

For the first four days of this week, I was on a call every four hours with the governor’s office and the governor’s team. I have hosted a virtual town hall with my constituents. I attended a virtual meeting with Equality Florida to talk about the intersections of blackness and L.G.T.B.Q. identities. I participated in two separate business calls with small business owners to talk about the damages and the response. How are we going to help small business owners recover from Covid-19 and then, added on top of that, the destruction from the unrest that we have been experiencing for the past 11 nights in a row? I have been to the site of the murder of George Floyd every day this week except for today. I did not go there because I’ve been on Zoom the entire day. For, like, the entire day.

I usually write every day. For the past 11 days, I have not been able to journal. So today I was able to make a daily journal entry, and that felt good to be able to just have a moment to recap and to rethink about all of the things that we transpired over the past week. The world has literally changed in the last 10 days, at least my world, let me put it that way.

And how are you taking care of yourself during this time?

Not well, not well. Fortunately for me and my body, I quit smoking and drinking a few years back. I do try to make sure I get some fresh foods in my body, either through smoothies or salads or something like that. The sleeping part has been really challenging. The riots were happening. I was fearful about, and still am, about white supremacists or Antifa. They’re mad at us too. So there’s a bit of concern about my physical safety.

Recently I got a chance to take a walk in the evening, and I had shared a socially distant meal at my mom’s house.

What is it like going every day to the site where Mr. Floyd died?

It’s surreal. The first day that I did it, I had an anxiety attack. We’ve all been sitting in our homes for weeks by ourselves. The closest contact with humans I had was like looking out the window. But it has been really a peaceful, almost calming kind of scenario at the site. There’s tons of community out all the time.

The artwork is just astonishing. It’s so beautiful. I’m working with our public art department and other property owners to try to preserve those boards that people have been using to protect their businesses. Artists are painting protest images on them, and they’re incredible. So we’re trying to preserve those and see if we can make sure that art is able to live on beyond the protest.

Where would it live, ideally?

It’s one of the things that I want to create, a center for racial healing. That’s where that art should live. It should not live in any white-owned institution that has been collecting and displaying when they determine that it’s a good time to see black art.

I want it right here. I want it to be called the George Floyd Center for Racial Healing or something to that effect.

I’m feeling somber. I know in Minneapolis, Pride will be virtual. There will not be parades. And I’m interested to see how that looks. I’m sad that it’s not happening. But I’m really proud of what Marsha P. Johnson and Sylvia Rivera created — they stood up at Stonewall, and they fought police brutality.