Why Protest Movements Are ‘Civil’ Only in Retrospect

The Rev. Dr. Martin Luther King Jr. of the public imagination was a unifying figure who bridged America’s bitter racial divide and peacefully liberated the South from Jim Crow.

The Rev. Dr. Martin Luther King Jr. who actually existed was spied on and blackmailed by the federal government, arrested roughly 30 times, beaten, stalked and assassinated, and died one of the most disliked people in America.

In life, despite his commitment to nonviolence, he was not seen as a model of socially acceptable protest. But in death, he is presented as such by opponents of newer movements, including the demonstrations that have spilled from Minneapolis into thousands of cities and towns in response to the police killing of George Floyd.

These sorts of transformations happen repeatedly in the accounting and recounting of social movements, historians say. As movements unfold, the most disruptive parts tend to get disproportionate attention, and critics often portray them as representative of the whole. In the retelling, the least confrontational parts get the same treatment: People sanitize the movement for public consumption, downplay its opposition and use the mythologized version to discredit its successors.

So it is that the Rosa Parks in many history textbooks just wanted to sit after a long day of work, when the real Rosa Parks was a longtime activist who sat as a calculated political act; that the suffragists most popularly memorialized are those who circulated petitions, not those who burned President Woodrow Wilson in effigy outside the White House; that the antiwar activists who went to Woodstock are better known than the ones who ransacked draft board offices and destroyed the files.

What emerges is not only an antiseptic image of individual activists, but an oversimplified division between “right” and “wrong” ways to protest that historians and social scientists say impedes understanding of how movements achieve their goals.

“The whole purpose of protest is to interrupt your daily life, to interrupt the previously scheduled programming so you pay attention to something new,” said Deva Woodly, an associate professor of politics at the New School who studies how movements use public discourse. “That’s not necessarily the same thing as condoning setting buildings on fire, but it’s certainly not the case that plain civility is something that would ever work.” 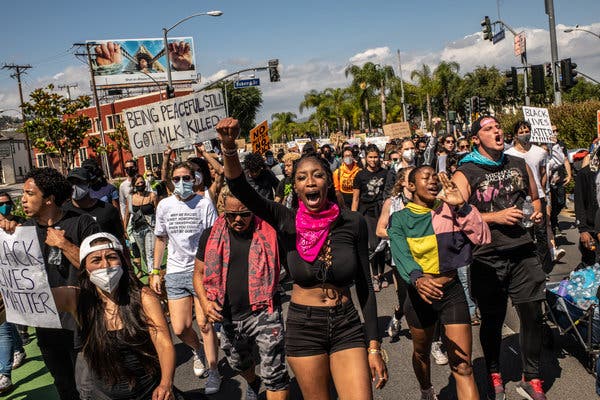 Protests over the killing of Mr. Floyd, like this one in Los Angeles this month, have largely been peaceful.  Credit…Bryan Denton for The New York Times

Social movements are almost always messy — and that’s part of what can make them effective, historians say. The neatly packaged narratives exist only in retrospect.

“You can tell a story about civil rights in which Martin Luther King made a good speech and then the government changed — and Martin Luther King did make good speeches, and government policies did change, but a lot of other stuff was happening at the same time,” said David S. Meyer, a professor of sociology at the University of California, Irvine. “Promoting social change requires a complicated recipe, and to pull out and identify one ingredient and say ‘this is the one that matters’ is either bad social science or just deceptive.”

The vast majority of the recent protests against systemic racism and police brutality have been peaceful, and they have also become increasingly popular, with public opinion of the Black Lives Matter movement shifting extraordinarily quickly. Polls show that a majority of Americans now believe, for instance, that the police are more likely to use deadly force against black people.

Yet there remains an intense focus on a small subset of behavior. When a recent Monmouth poll, for instance, asked whether respondents supported the protests, it included one specific incident in the question: “the burning of a police precinct in Minneapolis.” While 57 percent said the protesters’ anger was “fully justified,” just 17 percent said their actions, when described that way, were.

Some of the United States’ most prominent social movements have involved violent confrontation — from the abolitionist John Brown’s 1859 raid on Harpers Ferry to the Haymarket affair of 1886 to the 1969 Stonewall riots — and the results don’t fit a neat pattern. In terms of plain effectiveness, apart from moral and philosophical considerations, it is not always the case that peaceful protest helps a movement achieve its goals and violent protest hurts it.

Omar Wasow, a political scientist at Princeton, found that the riots after Dr. King’s assassination drove some voters toward Richard Nixon’s “law and order” platform in 1968 — yet a year later, Stonewall gave a major lift to the gay rights movement. Researchers have found that the 1992 Los Angeles riots led to “a marked liberal shift in policy support at the polls” — yet they also became a major issue in the city’s 1993 mayoral race, in which Angelenos elected their first Republican mayor in 36 years.

Most often, historians say, social movements succeed in the vast space between riots and “civility.”

Public opinion has a poor track record of predicting what will be effective: A Gallup poll in 1961 found that 57 percent of Americans thought sit-ins and the Freedom Rides hurt the chances of integration in the South. And after the 1963 March on Washington, where Dr. King delivered his “I Have a Dream” speech, Gallup found that 74 percent of Americans believed mass demonstrations harmed the cause.

Dr. King himself was highly unpopular during his lifetime, as two of his children emphasized.

Martin Luther King III at a memorial service for Mr. Floyd in Minneapolis this month. “Dad totally used the method of nonviolence, and he was consistently criticized,” Mr. King said. Credit…Lucas Jackson/Reuters

“There’s always going to be a group that attempts to demonize that which is being done — and for their own purposes, not because it’s right, good or just, but just because they want to foster a different position,” said Martin Luther King III, Dr. King’s oldest son. “Dad totally used the method of nonviolence, and he was consistently criticized.”

Bernice King, Dr. King’s daughter and chief executive of the King Center, said she believed the sanitized version of his work “reflects attempts to not only diminish my father’s courage and tenacity in speaking truth to power, but also reflects attempts to diminish the power of nonviolence.”

Whether they involve a rally, a raised fist or a bent knee, protests have always drawn a public backlash. In fact, the very tactics some point to as models now were considered too confrontational then — leading Dr. King, in his “Letter From a Birmingham Jail,” to denounce “the white moderate, who is more devoted to ‘order’ than to justice; who prefers a negative peace which is the absence of tension to a positive peace which is the presence of justice; who constantly says: ‘I agree with you in the goal you seek, but I cannot agree with your methods of direct action.’”

Carol Faulkner, a historian at Syracuse University, reeled off a list of brutal public responses to peaceful protests as far back as the 1830s, when a white mob tied a rope around the abolitionist William Lloyd Garrison’s waist and dragged him through the streets of Boston, and more than 10,000 people descended on a meeting site for abolitionists in Philadelphia and burned it to the ground.

Nineteenth-century women’s suffragists “went out of their way to present themselves as very middle-class, very respectable, and used the tools of respectable politics,” Dr. Faulkner added. But their message made them targets even when their tools were petitions and town-hall meetings, and those tools were not always effective.

In 1860, the suffragist Elizabeth Cady Stanton addressed the House Judiciary Committee for two hours, after which The New York Times reported, “She was earnest, and eloquent, and plausible, but she must have felt that she was not convincing her audience — and she did not.”

By the time the 19th Amendment was ratified, the movement had split into factions: the moderate National American Woman Suffrage Association, or NAWSA, and the more radical National Woman’s Party. After N.W.P. members burned President Wilson in effigy in February 1919, Mary Garrett Hay of NAWSA said their “outrageous performances” undermined the whole movement.

Yet some of the N.W.P.’s actions — or, more precisely, the police treatment of the women arrested for those actions — helped turn public opinion in the movement’s favor, Dr. Faulkner said, much as the vicious attacks against civil rights protesters did and police crackdowns may be doing now.

This was an explicit part of Dr. King’s strategy: using nonviolent protest to provoke a response that would put the brutality of Jim Crow on display.

“He did not believe in violence, but he believed in nonviolent direct action that would lead to a confrontational crisis situation,” said Daniel Q. Gillion, a professor of political science at the University of Pennsylvania and author of “The Loud Minority: Why Protests Matter in American Democracy.” “That’s why he broke the law that he didn’t think was right, and the reason why he sent kids out there to deal with Bull Connor fully knowing that Bull Connor was going to unleash dogs or do something hysterical.”

Dr. King locked arms with his aides as he led a march of thousands to the court house in Montgomery, Ala., on March 17, 1965.Credit…Associated Press

Dr. Gillion ranks the intensity of protests by giving one point for each of nine characteristics: more than 100 participants, duration longer than a day, backing from a political organization, participants carrying weapons, a police response, arrests and — regardless of which side causes them — property damage, injuries or deaths.

He has found that the intensity of protests in a congressional district affects the voting record of the district’s representative, and that intense protests are associated with higher voter turnout among people who are ideologically aligned with the protesters.

Conversely, in his book “Polite Protest,” Richard Pierce, a historian at the University of Notre Dame, studied a nonconfrontational civil rights movement in Indianapolis and found that it was no more successful than the confrontational movements in other cities.

“They never marched, they never protested out loud, they negotiated, they used meetings — they were still held back,” Dr. Pierce said. “Blacks can’t continue to wait around to find an acceptable form of protest that will generate 100 percent approval on the other side, because that doesn’t exist.”