​North Korea Threatens to Redeploy Troops ​Near Border With South

SEOUL, South Korea — North Korea’s military on Tuesday threatened to send back troops that it had withdrawn from areas near the South Korean border, in the North’s latest warning that it was prepared to abandon the détente that has prevailed on the Korean Peninsula for two years.

In recent weeks, North Korea has declared its intent to reverse steps that both sides have taken over the years to ease tensions along the heavily armed border. Last week, the North referred to the South as an “enemy,” accusing it of reneging on a 2018 agreement to stop sending propaganda across the border.

The North Korean People’s Army said on Tuesday that it had been asked to develop “an action plan” to “turn the front line into a fortress and further heighten the military vigilance against the South,” according to a statement published by state media. It said the plan would involve returning soldiers to areas that had been demilitarized under past agreements with the South. 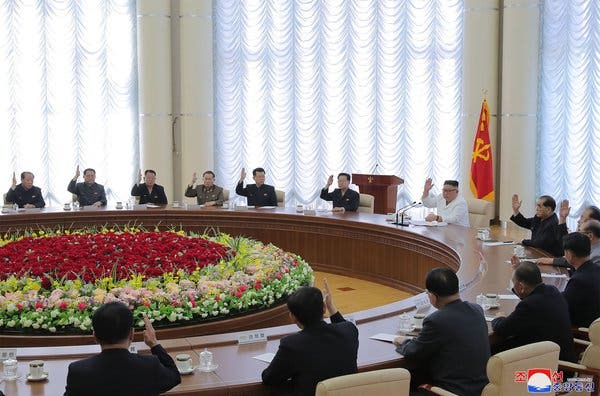 Sending more troops to the border — already the most heavily fortified in the world — is guaranteed to raise tensions with the South. But in saying that the move was in the planning stages, the North seemed to be leaving room for compromise.

The North reacted with anger this month to propaganda campaigns carried out by activists in South Korea, who have used balloons to send leaflets over the border denouncing Kim Jong-un, the North’s leader, and his repressive government. South Korea, hoping to keep the peace, has vowed to stop the balloon launches and is planning legislation that would outlaw them.

In its statement on Tuesday, the North Korean military said ​the North was prepared to start sending its own propaganda leaflets into the South.

The threatened North Korean troop deployment would involve areas near the border that have been demilitarized since 2000, when the two Koreas’ leaders met for the first time. Monday was the 20th anniversary of that summit meeting.

Under those agreements, the North ​withdrew some of its frontier military units to make way for roads linking South Korea to Diamond Mountain — a resort destination in the North, which became the site of an experiment in inter-Korean tourism — and to Kaesong, a North Korean town near the border where the two Koreas jointly operated an industrial park.

Both projects were part of the South’s “Sunshine Policy” of improving ties through economic cooperation, which led to the 2000 meeting between Mr. Kim’s father, Kim Jong-il, and then-President Kim Dae-jung of the South. But that good will soured over the years as North Korea continued to develop a nuclear arsenal, and the two projects were eventually shut down.

The Koreas’ relations warmed again in 2018, when Kim Jong-un and the South’s current president, Moon Jae-in, met twice​. They agreed to stop cross-border propaganda, and they set a goal of resuming the Kaesong and Diamond Mountain projects. ​They also removed more troops from the border area, shutting down some of the guard posts that both Koreas maintain within the so-called Demilitarized Zone that separates them.

President Moon Jae-in of South Korea, second from left, meeting with advisers in Seoul on Monday.Credit…Lee Jin-Wook/Yonhap, via Associated Press

But acrimony has returned in recent months. Mr. Kim’s diplomacy with President Trump collapsed last year, frustrating his hopes of winning relief from tough international sanctions imposed on the North over its nuclear weapons. He has since stepped up pressure on the South to move ahead with the Kaesong and Diamond Mountain ventures, both of which had brought the North much-needed hard currency.

Under the 2018 agreements, however, those joint projects were to be resumed only as part of a broader deal to denuclearize the North. The South’s refusal to proceed with them regardless has led to increasingly harsh rhetoric from the North, whose economy, already suffering under the sanctions, has been damaged further by the coronavirus pandemic.

Last week, North Korea cut off all communication lines with South Korea, including military hotlines, and said it would expand its nuclear weapons capabilities.

On Saturday, Kim Yo-jong, Mr. Kim’s sister and a prominent adviser, said the North should no longer “trust the trite language​” coming from Mr. Moon’s government.

“I feel it is high time to surely break with the South Korean authorities​,” she said, adding that the ​”​next step​”​ would be taken by the North Korean military.

On Monday, Mr. Moon marked the 20th anniversary of the Koreas’ first summit meeting by saying that the road to peace was​ “slow” and “tortuous.” He urged Mr. Kim “not to reverse the promise of peace he and I made before 80 million Koreans.”

Image copyright Getty Images Image caption Fox said Tucker Carlson would address the topic in his show on Monday A...