DAKAR, Senegal — When Daniel Khan Mbuh died in a hospital in northern Cameroon, the hospital declared the cause of death to be Covid-19 — then released the body to the family instead of arranging for a safe burial, his daughter Stella said.

Ms. Mbuh said she was told the house where she had been caring for her father in the city of Bamenda would be disinfected. Nobody came. When she tried to get tested, the hospital refused, saying there were not enough test kits. And she was never advised to self-isolate, so she simply imposed her own two-week quarantine on herself and her siblings.

“They said they are following contacts,” Ms. Mbuh said of health officials, “but I am one of the contacts. And I am not being followed.”

The spread of the new coronavirus is now accelerating in many countries in Africa, where medical resources are stretched, rumors are rife and efforts to stop the pandemic are sometimes haphazard.

Public health experts have warned that Africa could become the next epicenter of the Covid-19 pandemic.

“Even though these cases in Africa account for less than 3 percent of the global total, it’s clear that this pandemic is accelerating,” Dr. Matshidiso Moeti, the W.H.O.’s regional director for Africa, said in a video briefing last week.

She said that until there was a vaccine available, the continent would have to live with a steady increase of cases. 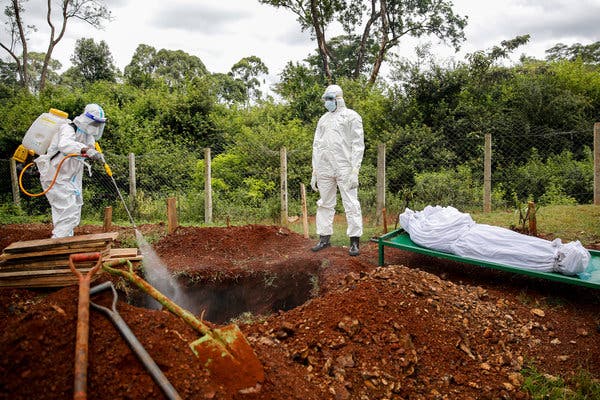 Workers disinfecting a gravesite before burying a man believed to have died from the coronavirus, at a cemetery in Nairobi, Kenya, last month.Credit…Brian Inganga/Associated Press

Most African nations staved off the initial spread of the virus for several months, partly by closing borders early, banning public gatherings and, in some countries, effectively tracing contacts using past experience of infectious diseases.

But the extra time this bought was not enough to bolster weak health care systems and to prepare for the predicted explosion of cases.

And now that many African countries, like others across the globe, are lifting their restrictions in order to restart their economies, the virus has new opportunity to spread and potentially, to overwhelm health care systems.

Nigerian doctors announced a nationwide strike starting on Monday over the lack of personal protective equipment in government hospitals and hazard pay for treating Covid-19 patients. Dozens of Nigerian health care workers have been infected, partly because they had no protective gear.

Epidemiologists at the Africa Centers for Disease Control and Prevention warned of a “catastrophic shortage” of health care professionals, and a drastic reduction of medical supplies because of border closures, price increases and restrictions on exports imposed during the pandemic.

“Africa needs to intensify its efforts to slow the spread of the pandemic,” they said in an article published last week in the journal Nature. They said that the continent needed financial support to stop the pandemic and tackle its economic and humanitarian effects.

The early spread of the pandemic in many African countries was driven by foreigners and the economic elite: people from Europe, and those with the means to travel there.

It has continued to spread among elites. Ghana’s health minister caught the virus “in the line of duty,” the country’s president, Nana Akufo-Addo, said on Sunday. Four people in the Kenyan president’s office tested positive and have been taken to the hospital, according to a statement from the office.

However, what has often been perceived in Africa as a foreigners’ disease is increasingly reaching all sections of society. Testing is still extremely limited in most countries, so it is impossible to know how widely the pandemic has taken hold. But a month ago, the W.H.O. predicted that between 29 and 44 million Africans could become infected in the first year.

Truckers are carrying the coronavirus across borders, just as truckers had also spread H.I.V., the virus that causes AIDS. Countries now have set up border controls, which can intensify the points of contact and possible spread of infection.

In the border town of Garoua-Boulaï in the Central African Republic, dozens of truck drivers jostled outside a tarpaulin tent waiting to get tested for the coronavirus. Some wore masks, but many did not, or had pulled them down below their chins.

They had to wait for many days for results until their samples could be driven 370 miles across the country to the capital, Bangui. But as they waited, other citizens crossed back and forth at the border without being checked. No truck, no problem.

Rumors and lack of information have also contributed to the spread. In Tanzania, President John Magufuli said that the country had eradicated coronavirus “by the grace of God.” His government stopped releasing any data on cases after April 29.

In Madagascar, the president touted an unproven herbal drink as a cure.

In Nigeria, most of the public health messages have been released in English, which many Hausa speakers in the north do not understand.

Students at a high school in Antananarivo, Madagascar, preparing to drink bottles of Covid Organics, an herbal tea, in April. The tea has been touted by the country’s president, Andry Rajoelina, as a powerful remedy for the coronavirus.Credit…Rijasolo/Agence France-Presse — Getty Images

In some countries, many say that hospitals, health authorities and governments are inflating their Covid-19 numbers in an attempt to attract extra funding, though there is little evidence to support such a claim.

In several cases, patients have run away from hospitals and quarantine centers; some believed themselves to be perfectly healthy, others objected to the conditions.

One man said he pulled into Bangui, two weeks ago when the bus he was on was stopped by police working with health authorities. He was tired and “felt malarial,” he said, and was pulled off the bus.

He tested positive and was hospitalized, but he said that the conditions were so bad that he ran away. He spoke on condition of anonymity, scared that the police would track him down.

“There was not enough water and very bad food,” he said. “They are still looking for me and I think that they would like to punish me, but they will never get me.”