Edén Pastora, a hero of the 1979 Sandinista revolution in Nicaragua who was known by his nom de guerre, Commander Zero — and who later turned against his victorious comrades in arms in a long counterrevolutionary war of words and guerrilla attacks that failed to budge the socialist regime in Managua — died early Tuesday in a military hospital in that city, the capital of Nicaragua. He was 83.

A grandson, Álvaro Pastora Gutiérrez, said the cause was a heart attack. He said Mr. Pastora had been gravely ill when he was admitted to the hospital, though he did not identify the nature of the illness.

Mr. Pastora’s wife told a local newspaper that the cause was bronchopneumonia. His family had denied rumors that Mr. Pastora had contracted Covid-19. The government has been widely accused of listing pneumonia as the cause of death in Covid cases as a way to dispel reports that the pandemic was out of control in Nicaragua.

Nicaragua has resisted adopting the strict measures that have been put in place around much of the world to curb the spread of the disease, refusing to close schools and businesses and allowing, and even organizing, mass events.

Mr. Pastora, in a life of danger and adventure that stretched from the jungles of the Miskito Coast to the halls of Congress in Washington, was instrumental in toppling the military dictatorship of Anastasio Somoza Debayle, the last of the line in a repressive family dynasty that had ruled their Central American country for nearly a half century.

But deprived of a major role in the revolutionary government he had helped to install, and increasingly disillusioned by its Marxist-Leninist tendencies, Mr. Pastora went into exile and for years challenged the regime, led by Daniel Ortega, first with an international campaign of political pressures and later with hit-and-run guerrilla attacks inside Nicaragua.

Along the way he courted sympathizers and bankrollers in the United States, Europe and Latin America; took money and air support secretly from the Central Intelligence Agency; attacked cities in Nicaragua; was denounced by Managua as a traitor and tried in absentia; was seriously wounded by an assassin’s bomb that killed eight people; and once ran for the presidency of Nicaragua. He lost — and two years later, in 2008, announced that he had reconciled with the Ortega government.

Known for bold stratagems that captured world headlines and romanticized his daredevil exploits, Mr. Pastora was an early leader of the Sandinista National Liberation Front and a charismatic figure in the struggle against a dictator who had looted the national treasury and ordered the deaths of countless opponents, including Mr. Pastora’s father. 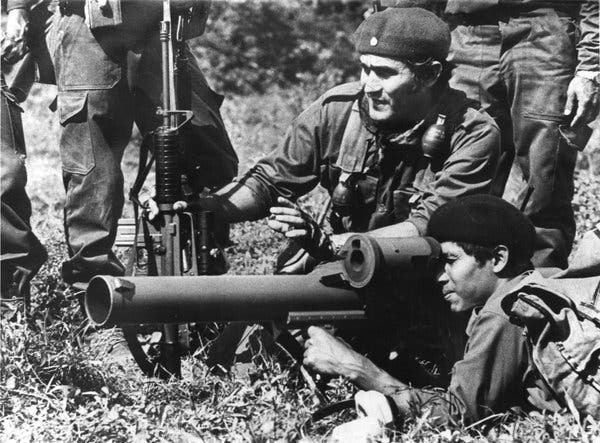 Mr. Pastora training a guerrilla in the use of a rocket launcher in 1978.

On Aug. 22, 1978, Mr. Pastora, a former medical student, led some 25 Sandinista guerrillas on a daring raid into the National Palace in Managua. The invaders killed or disarmed the palace guards and seized more than 1,000 hostages, including the entire Nicaraguan Congress and most of the senior officials of the Somoza dictatorship.

For three days, as a shocked world watched, the revolutionaries held out until General Somoza capitulated to their demands for the release of scores of political prisoners, a $500,000 ransom and safe passage to Panama. The spectacular raid established the legend of “Comandante Cero.” Photographers caught him as he mounted the steps of the escape plane: a triumphant swashbuckler in a dark beret, clutching a rifle, his chest crossed with bullet and grenade bandoleers.

The raid reignited a revolution that had been simmering for years. Within days, six cities rose in revolt. Insurrections soon spread across the country. By spring, a civil war was underway, pitting General Somoza’s well-equipped National Guard against a ragtag coalition of rebel forces. Mr. Pastora commanded the southern front in an offensive that slowly closed in on Managua.

With battles raging on the city outskirts, General Somoza resigned on July 17, 1979, and flew to Miami. As triumphant rebels drove through the city firing automatic weapons in the air, a Junta of National Reconstruction was installed. The war had left 50,000 people dead and 600,000 homeless.

A year later, General Somoza was assassinated in Paraguay by Sandinista commandos, who blew up his limousine with an anti-tank rocket.

Despite his efforts for the revolution, Mr. Pastora, who had voiced presidential ambitions, was not named to the junta or to a ruling directorate. He was named deputy defense minister and assigned to organize Sandinista militia reserves. He was offended when many Sandinista leaders moved into luxury homes in Managua.

The junta took on Cuban advisers and pledged land reforms, equality for women and a nonaligned foreign policy. But critics said the regime was turning Nicaragua into a state modeled on Cuban socialism, with cadres enforcing political discipline and stifling dissent.

In 1981, Mr. Pastora quit the government and disappeared. Ten months later, he surfaced in Costa Rica and, echoing United States charges, denounced the Sandinista government as a betrayal of the revolution, saying that it had imposed censorship, delayed elections and aligned itself with Cuba and the Soviet Union. The Sandinistas dismissed him as a renegade.

Mr. Pastora in 1982 raised funds in Portugal, Italy, West Germany and Spain. He met congressional leaders and White House officials in Washington in 1983, winning pledges of $27 million in aid. American corporations made large contributions as well. Panama gave him a helicopter and $300,000.

But his efforts to dislodge the Sandinistas with political pressure did not succeed, and in 1983 he declared war.

“I consider it my duty as a revolutionary citizen to do everything within my power to prevent the revolution from being aborted — either by this Marxist obstinacy or by spurious counterrevolutionary forces,” he said in a commentary in The New York Times. “It is with a feeling of sadness that I have taken up arms not as a rebel but to challenge the legitimacy of the Sandinist leadership in Managua.”

Mr. Pastora with Fidel Castro in an undated photo displayed in Mr. Pastora’s home during a 2019 interview with the Spanish-language news agency EFE. Credit…Jorge Torres/EPA, via Shutterstock

With secret C.I.A. support, Mr. Pastora assembled a large force of guerrilla fighters, calling it the Democratic Revolutionary Alliance. It attacked the Managua airport, the Pacific port of Corinto, the city of San Juan del Norte and other targets. But there was no popular uprising, as he had hoped for. He was branded a traitor and tried in absentia. Sandinista offensives forced his retreat to Costa Rica. As his losses mounted, funds from the United States and elsewhere dried up.

In 1984, Mr. Pastora was badly burned and three reporters and five other people were killed by a bomb that exploded at a news conference at his jungle camp. He blamed the C.I.A., which he said had retaliated for his refusal to merge with other anti-Sandinista groups. The Reagan administration blamed the Sandinistas for the bombing. Some investigators traced the attack to a leftist Argentine operative, but no one was ever prosecuted.

After six senior commanders defected to a rival group in 1986, Mr. Pastora abandoned his war against the Sandinistas and opened a shark-fishing business in Costa Rica.

“He has been a great symbol, a man with great charisma,” said José Davila, speaking for the defectors. “But he lacks political ability. He could never make an alliance. So instead, people left him.”

(The fight against the Sandinistas was carried on by a right-wing force known as the contras with aid from Washington and secret assistance from a conspiracy, led by the National Security Council aide Lt. Col. Oliver North, that sold arms to Iran for funds that were illegally passed to the contras.)

In the 1990s, Mr. Pastora was allowed to return to Nicaragua under an amnesty. But his efforts to form a new political movement fizzled, and his plan to run for president in 1996 was rejected by election officials on technical grounds. In 2006, he was allowed to run for president as a minor-party candidate, but he finished fifth with less than 1 percent of the vote. (His return to the political arena was portrayed in a 2006 documentary, “Edén Pastora — Comandante Cero,” directed by Alvaro Pardo.)

Mr. Pastora at his home in Managua in 2019.Credit…Moises Castillo/Associated Press

Edén Pastora Gómez was born in Dario, Nicaragua, on Jan. 22, 1937, one of six children of Panfilo Pastora and Elsie Gómez de Pastora. When Edén was 7, his father, a prosperous rancher, was killed by Somoza’s National Guard. Officials said he died in a dispute over land, but his family called it murder. It left his son with a hatred for “injustice, oppression and regimes of terror,” as he later put it.

The boy wanted to be a Roman Catholic priest, but his mother opposed it. At Colegio Centro América, a Jesuit-run secondary school in Granada, about 26 miles southeast of Managua, he studied history, the arts and the humanities with the sons of Nicaragua’s elite families.

When he was 16, a priest introduced him to the nationalist teachings of Augusto César Sandino, the rebel general who, from 1927 to 1933, led a guerrilla war against American Marines who were enforcing a United States presence in Nicaragua. Murdered on orders of the Somoza family, which regarded him as a threat, Sandino inspired generations of future Somoza enemies.

In Mexico in the mid-1950s, Mr. Pastora studied medicine at the University of Guadalajara. He organized anti-Somoza revolutionaries at the university, and did not complete his studies. Instead, he returned to Nicaragua in 1959 to run his family’s ranch and to join the recently formed Sandino Revolutionary Front, one of many groups that arose in the 1960s and ’70s to oppose the dictatorship.

Mr. Pastora had been married since the 1960s to Yolanda Torres Giron de Pastora, his fourth wife. He was reported to have 19 children from various relationships.

In 2008, two years after losing his presidential bid, Mr. Pastora announced that he had reconciled with the Sandinistas and pledged support for President Ortega.

“This government is making a revolution,” he said, “one-eyed or lame, but it is a revolution.”

In 2016, nearly four decades after the Nicaraguan revolution, Mr. Ortega was elected to his fourth term as president. Mr. Pastora held a minor government post as minister of development for the San Juan River Basin, where he owned a thriving shark-fishing business at San Juan del Norte.

Image copyright AFP Image caption The US and UN urged Iraq's government to bring the killers of Hisham al-Hashimi to...