In Iraq, a New Prime Minister Takes Stock of His Bloodied Land

MOSUL, Iraq — From the moment Iraq’s new prime minister stepped off the Iraqi Army MI-17 helicopter for a tour of Mosul, the city most damaged by the Islamic State’s takeover in 2014, he plunged into a landscape of loss.

Everywhere there were wrecked buildings, communities shredded, and the shadow of “the disappeared” — people taken by the Islamic State and never found, and those killed or imprisoned by Iraqi forces or militias, whose families never learned what happened to them.

“I saw the distress of the constituent groups and the displaced,” he said. “People are bearing the burden of something they did not cause.” 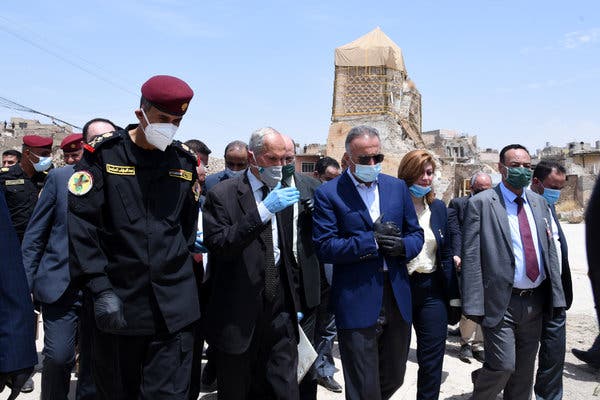 In Mosul, the country’s third-largest city, the “constituent groups” are a cross-section of the country — Sunni Arabs and Shiite Arabs, Kurds and Christians, Yazidis and Turkmen. And everyone feels something was stolen from them, first when ISIS took over, and then again in the war to push the militants out.

Mr. Kadhimi is in many ways a Western-style leader. He has a message for every event, and he stayed on schedule through a 12-hour day. His chief of protocol ensured that everyone with him was constantly supplied with disinfectant gel.

But nothing could prepare Mr. Kadhimi, 54, for the anger and grief that people called out to him every chance they got.

Among his first stops were the Mosul Museum, its collection hacked to pieces by ISIS, and the Al Nuri Grand Mosque, a renowned Iraqi landmark with an intricately carved leaning minaret.

The wind blows through the lower part of the mosque now, which was badly damaged in the fighting., During the Islamic State takeover of Syria and Iraq, the militant leader Abu Bakr al Baghdadi declared himself the group’s caliph from its pulpit.

If ever there were a place where the stones have voices, it is Mosul. The destruction is almost audible. Whole blocks are piles of debris, chunks of concrete are massed three and four stories high, and clinging to them are shacks, tacked together out of scrap metal and canvas. This is what passes for homes today in Mosul.

The prime minister only glimpsed this chaos as he swept through the city in a motorcade of cars and army vehicles, tearing down streets emptied of people to ensure his safety.

Vast sections of Mosul are reduced to rubble.Credit…Sergey Ponomarev for The New York Times

But in his meetings with local residents, he got a true sense of the magnitude of the problems facing his new administration.

After meeting with the leaders of the security forces, Mr. Kadhimi held a forum in the provincial governorate building. First the Sunni Muslim sheikhs filed in, dressed for the occasion. Their long tribal robes and gauze dusters, trimmed with golden or black braid, brushed the floor, their checked head scarves were held in place by traditional black agals.

“In the name of the Council of Nineveh Tribes, we greet you,” said Sheikh Saleh Al-Khalidi.

Then he listed Mosul’s needs: new bridges to replace the ones ISIS destroyed; compensation for homeowners and businesses whose properties were demolished or badly damaged in the fight to reclaim the city; resumption of repairs on the Tomb of Jonah, the biblical figure said to have been regurgitated near Mosul after being swallowed by a whale; reconstruction of the hospitals and clinics.

And — oh, yes — all the mosques and churches damaged by ISIS needed to be rebuilt.

The prime minister listened, and then reminded people of the realities.

“We are witnessing the worst economic situation since the formation of the Iraqi state,” he said more than once throughout the day.

“We have solely relied on oil for our revenue,” he said. “Ninety-four percent of our revenue comes from oil. So because of that there is no private sector.”

The prime minister recited his own list of needs: money, which the new government does not have; a reconstruction ethos that is free of corruption, which will take time to put in place; and reconciliation between tribes, sects, faiths and ethnicities, which will take effort from everyone.

As for the “disappeared?” They are a top priority, Mr. Khadhimi promised. Iraqi and international human rights organizations estimate there are thousands of people missing in Iraq from the ISIS era.

In Sinjar, exhuming a mass grave for victims of the Islamic State.Credit…Zaid Al-Obeidi/Agence France-Presse — Getty Images

Mr. Kadhimi next ventured into the Nineveh Plains, the great flat farming lands that spread north and east of Mosul. Below the peaceful fields, archaeologists say, are countless ancient Assyrian sites dating back nearly 3,000 years.

Above ground, the villages and farms are home to some of the last surviving communities linked to the sects that populated this part of the world in the earliest years of Christianity — Assyrian Christians and Syriac Orthodox, as well as non-Christian Yazidis and Kakai.

But as in so much of Iraq, there is untold damage here too.

Less than 75 years ago, Christians made up 12 percent of the Iraqi population, and there were still Jews in the country. Today, barely 1 percent of Iraqis are Christians.

Mr. Kadhimi has made a point of reaching out to them, and visited two Christian villages, Bartella and Hamdaniya, sending a reassuring signal to the beleaguered community. A measure of their excitement was visible in the group of 20 young Christians from Hamdaniya who dressed up in the embroidered local dress used for important religious occasions.

“For the first time since 2003, we feel safe,” said Nicodemus Dawood Sharif, the Syrian Orthodox bishop of Mosul, who met with Mr. Kadhimi in Hamdaniya. But, he added, “ We have no confidence in the government.”

“Our people have left, Your Excellency,” the bishop said. “Once upon a time, the Iraqis said, ‘Saturday has gone, and next we will get rid of Sunday.’” The reference was to the Sabbaths of Jews and Christians.

In this meeting, which included Muslims as well as Christians, Mr. Kadhimi sent a message of unequivocal support.

“This place is a symbol of coexistence,” he said. “My brothers, it is everyone’s right to belong here. We must defend this heritage.”

“ I advise you to have tolerance for each other, because Jesus stands for tolerance, and because without tolerance we cannot live together and our diversity must be a source of strength for us, ” he added.

Mr. Kadhimi ‘s last stop was a displaced persons camp in the highlands southeast of Mosul.

It was hot and there was no shade in the late afternoon as the men gathered, the older ones in traditional dishdasha, the younger ones in more Western clothes, but all looking anxious, afraid to be hopeful.

Mr. Kadhimi looked out at the weather-beaten men, one in a wheelchair pushed by a young relative, others leaning on canes, a few standing upright with expressionless faces.

“Daesh gangs have betrayed the people,” he said, using the Arabic acronym for ISIS, “and it is the government’s duty to preserve your dignity.”

One of the first to speak was Sheikh Mohammed Kafash, who represents people from Al-Ba’aj, a town in the far west of the province. He sounded desperate. Dignity seemed almost impossible to imagine.

“Our only demand is to return home,” he said. “Some of us here have no homes now to shelter us, our harvest is lying in the field with no one to gather it. We are lucky that you came to us. Please bring us back home, one by one.”

“We do not know their fate.”