(Want to get this briefing by email? Here’s the sign-up.)

We’re covering a military clash between India and China, new cases and containment measures in Beijing and the media landscape in the Philippines. 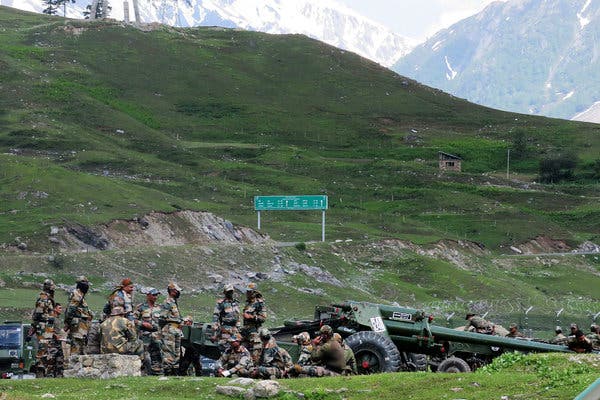 Indian soldiers at a transit camp before heading to Ladakh, the western border area where fighting has erupted with China.Credit…Reuters

An Indian military spokesman said on Tuesday that three Indian soldiers were killed during the fighting, which involved rocks and wooden clubs, and 17 others succumbed to injuries and cold in the freezing, high-elevation terrain. Preliminary reports indicated that the soldiers had not been shot.

Indian media reported that Chinese soldiers had been killed, but this was not confirmed by Beijing.

The two countries had been working to de-escalate border tensions following several face-offs between Chinese and Indian troops in recent weeks.

Context: The violence is a continuation of a long-running dispute between India and China about the precise location of their jagged Himalayan border, known as the Line of Actual Control. They fought a war over it in 1962 that ended in an uneasy peace.

What’s next: “Neither side wants a war, especially India, because China has a far superior military,” Jeffrey Gettleman, our New Delhi bureau chief, told me. “Both sides are now trying to calm things down, at least that’s what the governments are telling us. What’s actually happening up on the Himalayan border, that’s another story. It’s a very remote area, off-limits to all but a few lonely herders and Indian and Chinese troops.”

Beijing raised its level of health alert to the second highest on Tuesday, ordering schools to close and urging people to work from home, as the government pressed to stop a spike in coronavirus infections.

Medical authorities confirmed another 27 infections, creating a total of 106 cases since last week, all traced to the sprawling Xinfadi wholesale food market in the city’s south.

Dozens of cities and provinces across China have in recent days stepped up monitoring and quarantine measures for people from Beijing.

Here are the latest updates and maps of where the virus has spread.

Smoke rising from the area of the liaison office in Kaesong, North Korea. Credit…Agence France-Presse, via Yonhap/Afp Via Getty Images

North Korea blew up a building where its officials had recently worked side by side with their South Korean counterparts in a liaison office. It was a clear message from the North of its displeasure with the South.

South Korean border guards heard an explosion and saw smoke rising from Kaesong, the North Korean town where the building was located. The blast was so powerful that windows in nearby buildings were shattered. (Watch the video.)

No South Koreans had worked in the office since January, when it was closed during the pandemic.

The North said the explosion reflected “the mind-set of the enraged people.”

Background: The office was opened in 2018 as a sign of thawing relations, and was the first channel for full-time, person-to-person contact between the Koreas.

Choe Sang-Hun, our Seoul bureau chief, said, “The Korean Peninsula may be plunging back into another phase of rising tensions. For months, North Korea has voiced its frustration with the South, repeatedly warning that it has lost faith in dealing with Seoul.”

If you have 5 minutes, this is worth it

Taking stock in a landscape of loss in Iraq

From the moment Iraq’s new prime minister stepped off a helicopter for a tour of Mosul, the city most damaged by the Islamic State, he plunged into a landscape of loss. Everywhere there were wrecked buildings, communities shredded, and the shadow of “the disappeared” — people taken by the Islamic State and never found, and those killed or imprisoned by Iraqi forces or militias.

Our Baghdad bureau chief, Alissa Rubin, went with him as he took stock of years of destruction. “People are bearing the burden of something they did not cause,” he said.

Hungary: Parliament passed legislation on Tuesday that critics say would cement into everyday use the sweeping powers claimed by Prime Minister Viktor Orban to fight the coronavirus.

In memoriam: Sarah Hegazi, an Egyptian L.G.B.T. activist who had been arrested after waving a rainbow flag, then jailed and tortured, took her life in Canada. In a final note, she wrote: “To the world: You’ve been greatly cruel, but I forgive.”

Snapshot: Above, a restaurant in Lake Worth Beach, Fla., in May. Outdoor seating at restaurants has become a popular solution for cities trying to reopen carefully. But in places like New York City, there’s been some backsliding, with people disregarding social distancing because they feel safe outdoors.

What we’re reading: This piece in The Atlantic is an ode to the cluttered home. Maybe clinging to your stuff, like those extra jars of spaghetti sauce, is more in sync with pandemic life these days.

Now, a break from the news

Watch: The documentary “My Father, a Spy,” which follows the translator and journalist Ieva Lesinska-Geibere as she assesses her relationship with her father, a K.G.B. spy who defected to the United States in the 1970s.

Do: We have a few tips on picking a meditation app that could help you steal a few minutes of Zen.

At Home has our full collection of ideas on what to read, cook, watch, and do while staying safe at home.

And now for the Back Story on …

The conviction of Maria Ressa, the award-winning journalist and founder of the news website Rappler who was found guilty of cyber libel in the Philippines on Monday, is being seen as a blow to press freedom in that country.

Alexandra Stevenson, our business reporter in Hong Kong who has been covering the case, spoke to Carole Landry, on the Briefings team, about the decision.

How much of a chilling effect will Maria Ressa’s conviction have on the media in the Philippines?

The media in the Philippines has been under pressure for some time. President Rodrigo Duterte bullies reporters and calls them “sons of bitches” at news conferences, officials have denied reporters’ access to official presidential events, and trolls have organized online campaigns to single out reporters and call them names like “presstitutes.” Yes, that’s a hybrid of the words press and prostitute.

The verdict of this case is different because it institutionalized some of this hostility. It was a test case for the definition of cyber libel. The case was originally dismissed by regulators because the time limitation — one year — had run out. But more senior officials applied a new argument to cyber libel, essentially saying that because an article can be updated online, it counts as continuous publication, making the libel a continuous crime. With Monday’s verdict, experts now say that publishers of online content can be sued for up to 12 years after something is published.

President Duterte has not been shy about his contempt for the media. Does this court ruling signal a hardening of his approach?

The Duterte administration has become more effective at silencing journalists. The president has threatened for years to take away the license for ABS-CBN, the national broadcaster. In May, the telecoms agency actually forced the network off the air, leaving a massive information void in parts of the country where the only source of general information for basic services and the weather is the broadcaster.

How has the coronavirus pandemic played into this shift?

We’ve seen more authoritarian-leaning governments around the world take advantage of social distancing rules to tighten their grip on protests and freedom of expression. In that same vein you could argue that a crackdown on the media in the Philippines is easier to pull off now because the rest of the world has limited bandwidth for more news.

That’s it for this briefing. See you next time.

Thank you
To Melissa Clark for the recipe, and to Theodore Kim and Jahaan Singh for the rest of the break from the news. You can reach the team at briefing@nytimes.com.

P.S.
• We’re listening to “The Daily.” Our latest episode is about the landmark Supreme Court ruling in the U.S.
• Here’s our Mini Crossword, and a clue: Italy’s capital, to Italians (four letters). You can find all our puzzles here.
• Lauretta Charlton, an editor for our Hong Kong newsroom, spoke with Glamour magazine about reporting as a black journalist.

(Want to get this briefing by email? Here’s the sign-up.) Good morning. We’re covering a low point for relations between...

What to do when a bear attacks If you encounter a bear making aggressive moves, this is what to do...