India-China Border Dispute: A Conflict Years in the Making

The killing of 20 Indian soldiers at the hands of Chinese troops armed with rocks and wooden clubs along a disputed border high in the Himalayas was a startling culmination of years of skirmishes between military forces from both countries.

But the burst of deadly violence — the first in the region in more than 40 years between the Asian heavyweights — has been decades in the making. The stakes have never been higher. Both nuclear powers are governed by nationalist leaders eager to flex their muscles in front of increasingly skeptical constituents. Other nations have expressed alarm and called for calm.

Here’s a look at how both nations arrived at this juncture, the battles that came before and how The New York Times covered the conflict.

A Border China Never Agreed To 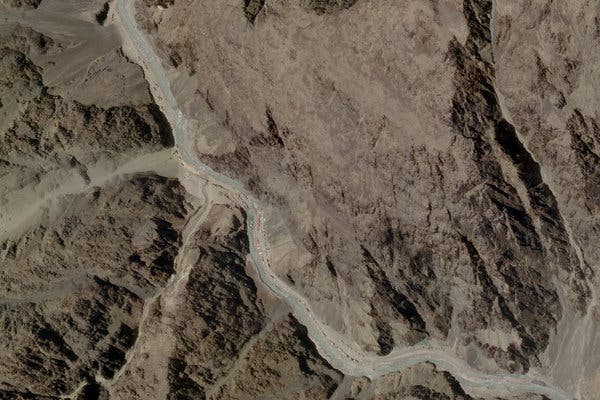 A satellite image taken over Galwan Valley on Tuesday in Ladakh, India, parts of which are contested with China.Credit…Planet Labs Inc, via Reuters

The conflict stretches back to at least 1914, when representatives from Britain, the Republic of China and Tibet gathered in Simla, in what is now India, to negotiate a treaty that would determine the status of Tibet and effectively settle the borders between China and British India.

The Chinese, balking at proposed terms that would have allowed Tibet to be autonomous and remain under Chinese control, refused to sign the deal. But Britain and Tibet signed a treaty establishing what would be called the McMahon Line, named after a British colonial official, Henry McMahon, who proposed the border.

India maintains that the McMahon Line, a 550-mile frontier that extends through the Himalayas, is the official legal border between China and India.

But China has never accepted it.

India and China Go to War

Crowds lining the streets to watch as Indian troops drive through the Ladakh region during border clashes between India and China in 1962.Credit…Radloff/Hulton Archive, via Getty Images

In 1947, India declared its independence from Britain. Two years later, the Chinese revolutionary Mao Zedong proclaimed an end to his country’s Communist Revolution and founded the People’s Republic of China.

Almost immediately, the two countries — now the world’s most populous — found themselves at odds over the border. Tensions rose throughout the 1950s. The Chinese insisted that Tibet was never independent and could not have signed a treaty creating an international border. There were several failed attempts at peaceful negotiation.

China sought to control critical roadways near its western frontier in Xinjiang, while India and its Western allies saw any attempts at Chinese incursion as part of a wider plot to export Maoist-style Communism across the region.

Chinese troops crossed the McMahon Line and took up positions deep in Indian territory, capturing mountain passes and towns. The war lasted one month but resulted in more than 1,000 Indian deaths and over 3,000 Indians taken as prisoners. The Chinese military suffered fewer than 800 deaths.

By November, Premier Zhou Enlai of China declared a cease-fire, unofficially redrawing the border near where Chinese troops had conquered territory. It was the so-called Line of Actual Control.

Tensions came to a head again in 1967 along two mountain passes, Nathu La and Cho La, that connected Sikkim — then a kingdom and a protectorate of India — and China’s Tibet Autonomous Region.

A scuffle broke out when Indian troops began laying barbed wire along what they recognized as the border. The scuffles soon escalated when a Chinese military unit began firing artillery shells at the Indians. In the ensuing conflict, more than 150 Indians and 340 Chinese were killed.

The clashes in September and October 1967 in those passes would later be considered the second all-out war between China and India.

But India prevailed, destroying Chinese fortifications in Nathu La and pushing them farther back into their territory near Cho La. The change in positions, however, meant that China and India each had different and conflicting ideas about the location of the Line of Actual Control.

The fighting was the last time that troops on either side would be killed — until the skirmishes in the Galwan Valley on Tuesday. Indian news outlets reported that Chinese soldiers had also been killed, but Beijing was tight-lipped.

It would be 20 more years before India and China clashed again at the disputed border.

In 1987, the Indian military was conducting a training operation to see how fast it could move troops to the border. The large number of troops and material arriving next to Chinese outposts surprised Chinese commanders — who responded by advancing toward what they considered the Line of Actual Control.

Realizing the potential to inadvertently start a war, both India and China de-escalated, and a crisis was averted.

Chinese troops in Ladakh holding a banner in 2013 that reads, “You’ve crossed the border, please go back.” Credit…Associated Press

Cat-and-mouse tactics unfolded on both sides.

After decades of patrolling the border, a Chinese platoon pitched a camp near Daulat Beg Oldi in April 2013. The Indians soon followed, setting up their own base fewer than 1,000 feet away.

The camps were later fortified by troops and heavy equipment.

By May, the sides had agreed to dismantle both encampments, but disputes about the location of the Line of Actual Control persisted.

Bhutan Gets Caught in the Middle

An Indian Army base in 2017 in Haa, Bhutan, close to a disputed border with China.Credit…Gilles Sabrié for The New York Times

In June 2017, the Chinese set to work building a road in the Doklam Plateau, an area of the Himalayas controlled not by India, but by its ally Bhutan.

The plateau lies on the border of Bhutan and China, but India sees it as a buffer zone that is close to other disputed areas with China.

Indian troops carrying weapons and operating bulldozers confronted the Chinese with the intention of destroying the road. A standoff ensued, soldiers threw rocks at each other, and troops from both sides suffered injuries.

In August, the countries agreed to withdraw from the area, and China stopped construction on the road.

Indian soldiers carrying the body of their colleague, who was killed in a border clash with Chinese troops, to an autopsy center at the Sonam Norboo Memorial Hospital in Leh on Wednesday.Credit…Reuters

In May, melees broke out several times. In one clash at the glacial lake Pangong Tso, Indian troops were badly inured and had to be evacuated by helicopter. Indian analysts said Chinese troops were injured as well.

President Trump offered on Twitter to mediate what he called “a raging border dispute.”

What was clear was that it was the most serious series of clashes between the two sides since 2017 — and a harbinger of the deadly confrontation to come.

Image copyright Reuters Image caption There is widespread hope that remdesivir could treat Covid-19 A BBC investigation has found that...

(Want to get this briefing by email? Here’s the sign-up.) Good morning. We’re covering Britain’s new sanctions on human rights...