The president of Honduras has announced that he tested positive for the coronavirus, joining a small group of world leaders infected in the pandemic that has swept the globe and reached into the halls of power of several governments.

In a televised statement late Tuesday, President Juan Orlando Hernández said his wife and two of his two aides had also become infected. He said that he began feeling unwell over the weekend, and that the diagnosis was confirmed later Tuesday.

Mr. Hernández said he had been receiving treatment, was well enough to continue working remotely and would be examined to determine the next steps. Doctors recommended rest, he added.

He said his wife, Ana García, was positive but asymptomatic.

“I feel enough strength and energy to continue forward and beat this pandemic,” he said. “We are going to get ahead of this. I trust in God, Honduran doctors and medicine.”

He also urged Hondurans to continue to follow social-distancing guidelines, as he had not been able to. “Because of my job I have not been able to stay 100 percent at home,” he said.

As the virus has ricocheted around the globe, the Americas have become an epicenter of the outbreak, with Brazil reporting the highest number of deaths after the United States, and nations like Peru, Chile and Mexico collectively reporting hundreds of thousands of confirmed cases.

The president of Guatemala, Alejandro Giammattei, writing on Twitter, expressed solidarity with Mr. Hernández and wished him a “speedy recovery.” 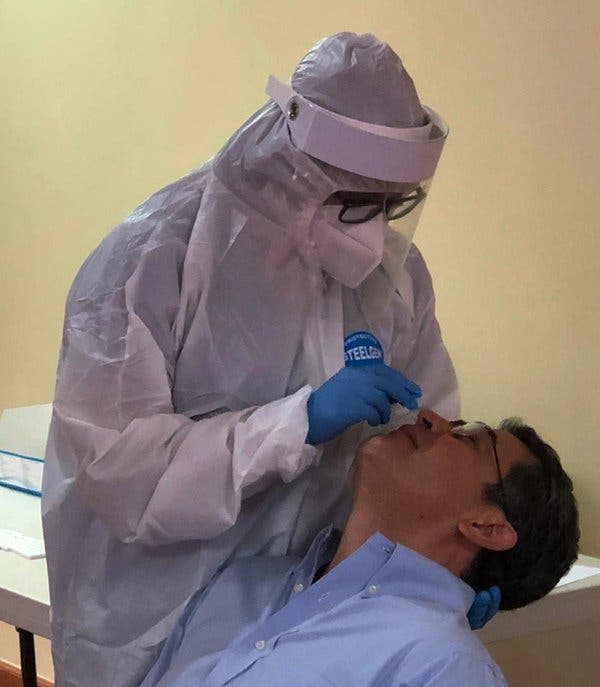 Honduras has confirmed more than 9,000 cases of the coronavirus, with 322 deaths, according to the Pan American Health Organization. The country was battered by a dengue epidemic last year that sickening more than 100,000 people and left 180 dead.

The country — which closed its borders, mandated a blanket curfew and severely restricted the ability of people to leave their homes because of the coronavirus pandemic — began reopening its economy last week after nearly three months of a shutdown. About half a million jobs were lost or suspended, according to estimates by the business sector.

Mr. Hernández joins a small number of world leaders who have announced that they have contracted Covid-19.

Iran is believed to have among the highest number of government officials infected by the coronavirus, including Vice President Masoumeh Ebtekar, President Hassan Rouhani’s deputy for women’s affairs and the highest-ranking woman in the government.

Image copyright Getty Images Singapore’s economy plunged into recession in the last quarter as an extended lockdown hit businesses and...