Beijing raised its level of health alert to the second highest on Tuesday, ordering schools to close and urging people to work from home as China’s government pressed to extinguish a spike in coronavirus infections menacing the capital.

The city announced the intensified health emergency footing late in the day, after having revealed that medical authorities confirmed another 27 infections from the virus, creating a total of 106 cases since last week, all traced to the sprawling Xinfadi wholesale food market in the city’s south.

“Epidemic trends in Beijing are very grim,” Chen Bei, a deputy secretary-general of the Beijing government, said at a news conference announcing the upgraded emergency response. She said that the new plethora of measures to halt infections were not intended to strangle economic life.

City officials face intense pressure to stop the new outbreak. After the pandemic spread from central China from late last year, Xi Jinping, China’s top leader, made defending Beijing from mass infections a priority. The capital is a nerve center of Chinese Communist Party rule, and a crowded, restless metropolis with more than 21 million inhabitants.

“Make containing the outbreak the most important and urgent task for now,” Cai Qi, the Communist Party secretary of Beijing, and a protégé of Mr. Xi, said at a meeting of officials on Monday. “Adopt the most resolute, decisive and strictest measures.”

Even so, the decision to raise the level of alert and shut schools was a potentially embarrassing and disruptive reversal for the government. Beijing had lowered its alert level for public health threats just 10 days earlier. Many grades had restarted over previous weeks, while others were just about to resume when this outbreak prompted authorities to postpone a restart.

In recent days, Beijing had already reinstated some anti-epidemic controls. Taxis had been ordered not to leave the city, and restaurants had been ordered to cancel banquets. A lockdown of residents in dozens of neighborhoods close to infection hot spots — preventing them from leaving their housing compounds or receiving visitors — expanded on Tuesday to cover seven more neighborhoods in the west of Beijing. 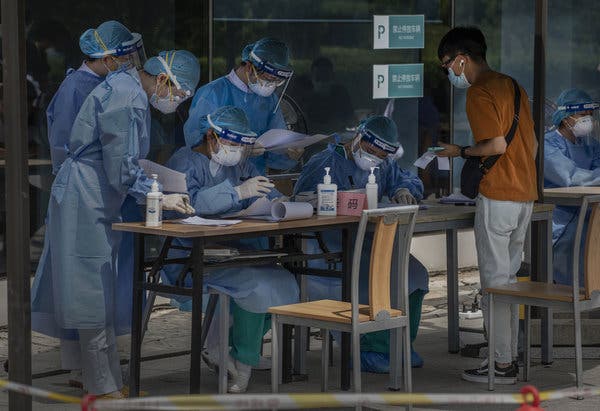 A testing site in Beijing on Tuesday. The new outbreak has raised fears of another wave of infections.Credit…Kevin Frayer/Getty Images

The new level of vigilance announced Tuesday will make these restrictions stricter, broader and more urgent. In recent days, Chinese disease experts have said the burst of infections in Beijing was worrisome but controllable.

Elementary and secondary schools, which had been gradually returning students to class rooms, must close again — a step likely to disappoint many parents who must supervise online learning. University and college students who had been preparing for a return to classes must stay away.

Museums, parks and libraries will not shut entirely, but must sharply limit numbers of visitors. Sports grounds for basketball, soccer and other physical activities that are usually open to the public must close. Tour groups to other parts of China will stop. Old age homes, psychiatric hospitals and other vulnerable facilities will be sealed from visitors.

Travel to and from Beijing may also be impeded. “Don’t leave Beijing unless it’s essential,” Ms. Chen said.

Officials have used the tracking tools honed over China’s months of fighting the pandemic to find people who visited the Xinfadi market.

Still, the cases clustered in one of the city’s most important sources of food appears to have alarmed officials that stall holders, suppliers and vendors could scatter the virus across the city.

At the news conference on Tuesday, city officials released details of the 27 latest cases, revealing that seven of the infected people worked in restaurants, preparing food or serving diners.

The new restrictions and general anxiety about the outbreak in Beijing have underscored how even limited outbreaks of new infections could frustrate efforts to return to normal in China and other countries.

For residents of Beijing, the rising alarm has created a reversal of roles. For months, they learned to look warily on any visitors who might bring the virus into the city and spread infections.

Now, they are the potential targets of monitoring, quarantine and suspicion across China after the burst of more than 100 infections in the capital since last week.

Dozens of cities and provinces across China have in recent days stepped up monitoring and quarantine measures for people from Beijing.

Harbin, a city in northeast China, ordered that all arrivals from Beijing go into “centralized quarantine” — which usually means confinement to an assigned hotel or dormitory room — while they undergo two nucleic acid tests to check if they have the virus.

At least one city, more or less signaled that all people from Beijing should stay away.

“From today individuals coming from Beijing to Daqing, an oil-producing city in the northeast, must undergo 21 days of isolation,” the city authorities announced on Monday, according to The Beijing News.

The Daqing authorities also “recommended that residents do not venture to Beijing for now unless it is essential.”