Even at a young age of 22, Chennaiyin FC‘s Anirudh Thapa has established himself as one of the best midfielders in India, with consistent performances for both club and country.

A lot of credit for Thapa’s rise in stature over the years lies with the All India Football Federation’s (AIFF) Elite Academy which identified his talent and gave him an opportunity to fulfill it. Thapa was also sent on a three-month long training stint to Ligue 1 side FC Metz which he feels has been highly beneficial in his growth.

Thapa explains the challenges he had to face when he first moved to the AIFF Elite Academy from the St. Stephens School in Dehradun when he was 14 years old.

“When I joined AIFF Academy, I was just 14 and I had come from St.Stephen’s. The players there were all really advanced. I had a good coach at St.Stephen’s but I never really had the quality players around me whom I found at the AIFF Academy to challenge myself,” Thapa told Goal .

“The facilities and coaches were great at the AIFF Academy. It was difficult for me at first because the competition was huge.”

But Thapa, who had paid scant attention to domestic football in India before, was to get an intensive crash course in the same during his stay at the academy.

“It was a great process for me. I could advance my game. I learned what football is in the country. We used to watch Pailan Arrows and I-League together. Before that, I just saw the national team but after coming to AIFF Academy, I got to know the history, Kolkata football and more.”

Thapa’s impressive performances in the AIFF set-up soon saw him grab the attention of numerous clubs, with Chennaiyin FC managing to sign the player up. The Dehradun-born player was also selected for a three-month training stint at FC Metz in 2016, alongside Jerry Lalrinzuala and Prosenjit Chakraborty.

It was a period that helped Thapa improve his technique and understanding of the game, thanks to the intensive nature of the training sessions in France.

“When I went to Metz, it was a huge step up. The football there was very advanced. The quality of the players, facilities and infrastructure was great. Players were training even at the age of six-to-eight. We used to train with the B team and sometimes with the U23 teams. It was great to learn from them. The tempo of the game was really high and the training we used to do was more technique-oriented and it was more with the ball.

“The food was also very different from what we got in India. Even my sleeping pattern. But it was great to learn and when I came to Chennai, it was not that hard for me to make the step up. Of course, the players at the club were more experienced but when it came to technique and game, I was able to compete with them. That was a huge thing for me.

“Yes, I wanted to stay there longer but I had already signed a contract with Chennaiyin FC and had to come back.” 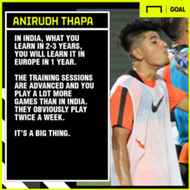 A lot of young players in India have been moving to lower tiers of European leagues of late. Thapa feels that it is very important to move to Europe at a young age and spend some time there. He feels that the amount of knowledge and skills you learn in a short period of time in such leagues is a lot more than what you learn in India.

“If they can stay for a longer period, it will be good because you can advance your game and be technically better. It is not just learning these things, it is also about learning it quickly. That is the main thing.

“In India, what you learn in two-to-three years, you will learn it there in one year. The training sessions are advanced and you play a lot more games than in India. They obviously play twice a week. It’s a big thing. You get more game time and it is very important in the learning curve for a player,” reasoned Thapa.

The Gunners boss insists the club can land their top targets this summer even without the lure of European football...