The Premier League has finally returned! We are excited to announce to all sport lovers that DStv and GOtv will broadcast all the remaining games of the 2019-20 season, which kicks off on Wednesday, 17th June, live on SuperSport.

Topflight football in England has been placed on a hiatus owing for over three months following the outbreak of the pandemic which silenced several activities across the globe.

Nevertheless, SuperSport viewers can therefore look forward to a feast of football as the English league resumes.

Here are some of the top matches you can’t afford to miss. The pick of the midweek matches sees Arsenal head to the Etihad Stadium to face the defending champions, Manchester City on Wednesday at 8:15pm on DStv SuperSport 3. 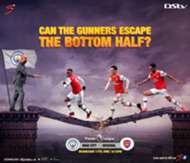 The Gunners come into the clash placed ninth on the log, but at least looking to build momentum after a 1-0 win over London rivals West Ham United in their last clash before the league suspension.

Meanwhile, Manchester Cityare relatively safe in second spot but will be hoping to claim the three points and ensure that Liverpool does not secure the Premier League title in their first match upon resumption.

Also, Wednesday marks a crucial clash for relegation-threatened Aston Villa who will host Sheffield United in Birmingham. The match will air live on SuperSport 3 & 10 on DStv at 6pm and GOtv SuperSport Select 2.

Villa are placed second from bottom and risked a drop to the second tier had the season been cancelled, but this game in hand offers them the chance to rise as high as 16th spot. The first full round of Premier League matches begins on Friday 19th to Monday 23rd June.

The schedule for the weekend includes the match between Tottenham Hotspur vs Manchester City, which will air live on DStv SuperSport 3 at 8:15pm.

On Saturday, Brighton & Hove Albion and Arsenal battle it out on DStv SuperSport 3 & 10 and GOtv SuperSport Select 2 at 3pm. Rounding up the fixture is the Merseyside Derby between Everton and the champions-elect, Liverpool on Sunday. 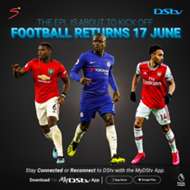 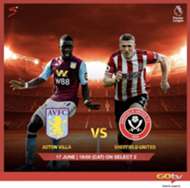 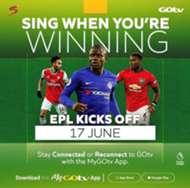