Olatunji Samuel Okuku believes resuming the Nigeria Professional Football League (NPFL) season is a sheer waste of time and feels cancelling the campaign might be a healthier option.

Numerous leagues across Africa including that of Nigeria were suspended following the outbreak of Covid-19 which claimed many lives as well as crippled numerous activities worldwide.

Football is gradually returning owing to the relaxation of lockdown restrictions across the globe. For instance, leagues in Spain, German, Portugal and Turkey have resumed while the Premier League will resume on Wednesday.

For the West African nation, no decision has been made despite receiving a letter from the Confederation of African Football (Caf) asking football associations to stipulate when and how their leagues will be determined.

Nevertheless, the Tripple 44 Academy CEO suggests ending the league will be the best verdict while advising the League Management Company and clubs to start thinking about next term.

“I don’t think the Nigeria Professional League should be allowed to resume, instead, we should focus on preparing for next season,” Okuku told Goal.

“The NPFL and Nigeria National League have got nothing to lose because our games are not live on television where we would have talked about TV rights.

“In addition, the majority of the teams are state-owned which means that players’ salaries are paid by the government plus incomes are not generated from gate fees.

“The LMC can choose some teams at random based on points and organise a mini-tournament for them where the country’s representatives in the Caf Champions League and Caf Confederation Cup will be decided.

“Then, they can rule that no club would go on relegation while teams will be promoted to the top-flight. And next season, there would be more numbers of relegated teams.

“To be frank, the fitness of Nigerian clubs will be really affected because they have not been training and playing together as a team – and resuming the league would mean we should be ready for several injuries – which will not be good for the image of the competition.” 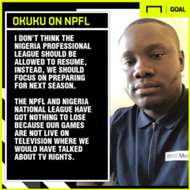 Unlike other leagues, especially in Europe where games are now played behind closed doors, Okuku believes that would be a tough standard to achieve in Nigeria.

“If we say the league should resume, we do not have the resources to keep the fans out of the stadium like in Europe,” he continued.

“Nigerian fans are so passionate about their teams and they would break lockdown rules to come and watch their darling clubs in action.

“However, if the league organisers want the league to continue then they consider playing the remaining games on neutral grounds to control excesses of home fans.

“Also, the players should be tested for Covid-19 as soon possible so that they can resume training in groups. But I’m unconvinced if the League Management company has the resources to do that.”

The 18-year-old has scored four goals in his last three appearances and the Norwegian coach is relieved to have him...