The Minnesota Vikings have been in the NFL for more than six decades and despite producing some great teams, including the “Purple People Eaters” and squads led by Randall Cunningham and Randy Moss, they have never won a Super Bowl.

Minnesota got to four Super Bowls — all of them under coach Bud Grant in the late 1960s and 1970s. Since Grant left, the Vikings have not made the Super Bowl again.

The Vikings have had several great players come through the doors, making it increasingly hard to determine who the top four players of all time are. Leaving off players like Randy Moss, Cris Carter and Adrian Peterson is nearly criminal.

So, who is on the Vikings’ all-time Mount Rushmore? Take a look at the list below. 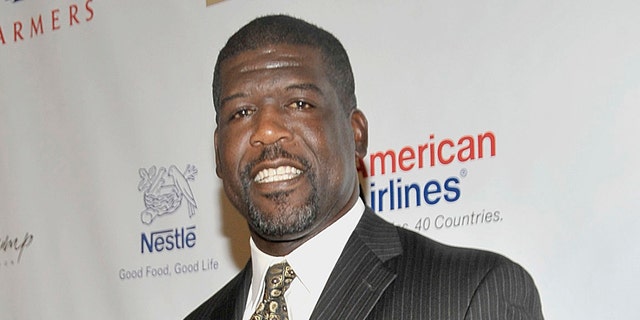 Randall McDaniel is one of the best offensive linemen ever to play in the NFL and one of the best to play for the Vikings. He was selected in the first round of the 1988 NFL Draft.

McDaniel played 12 years for the Vikings and earned 11 Pro Bowl and seven First-Team All-Pro selections. He started 220 of 222 games.

After his career was over, McDaniel was inducted into the Hall of Fame in 2009. He was named to the NFAL 1990s All-Decade Team, the NFL 100th Anniversary All-Time Team, and the Vikings’ Ring of Honor. 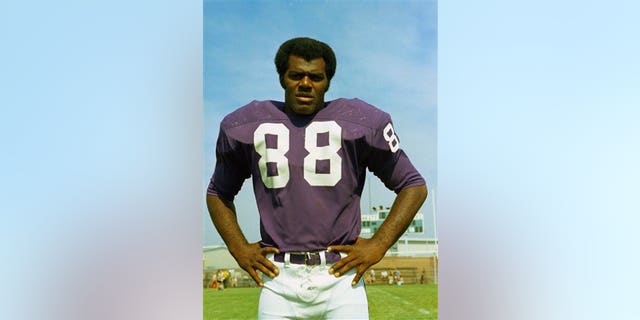 The Vikings selected Alan Page in the first round of the 1967 draft. Page was a key member of the “Purple People Eaters.” He had a streak of playing 218 consecutive games and played in all four of the Vikings’ Super Bowl appearances.

Page became the first defensive player to win the MVP award in 1971. He recovered three fumbles and had two safeties. He was also a two-time Defensive Player of the Year, six-time First-Team All-Pro selection, and a nine-time Pro Bowler.

Page was inducted into the Hall of Fame in 1988 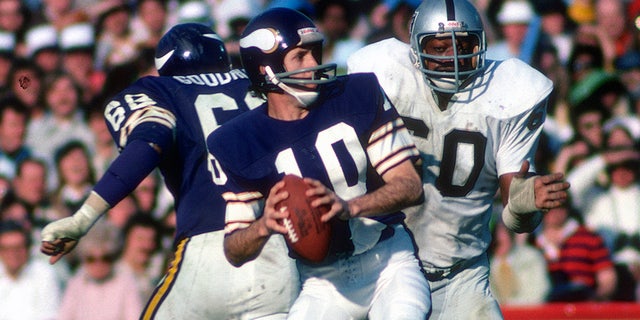 Fran Tarkenton of the Minnesota Vikings drops back to pass pressured by Otis Sistrunk of the Oakland Raiders during Super Bowl XI on Jan. 9, 1977 at the Rose Bowl in Pasadena, California. The Raiders won the Super Bowl 32 -14. (Photo by Focus on Sport/Getty Images)

Fran Tarkenton is the best quarterback to come through the Vikings organization. He played 13 seasons with the team in two separate stints. He recorded 33,098 passing yards and 239 touchdown passes and is the team’s all-time passing leader.

Tarkenton was a five-time Pro Bowler and was named the MVP and Offensive Player of the Year in 1975. In his MVP season, he led the league with 25 touchdown passes and recorded 2,994 passing yards.

Tarkenton was inducted into the Hall of Fame in 1986. 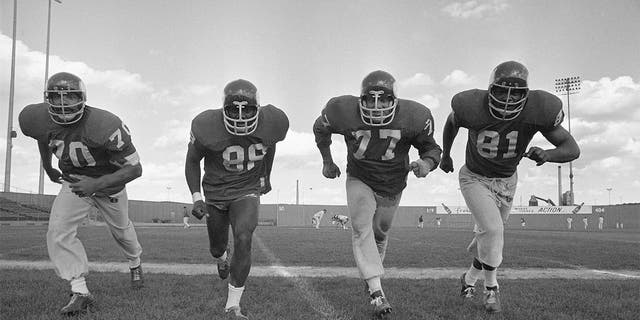 In this Sept. 16, 1971 photo, the powerful defensive front four of the Minnesota Vikings , from left, Jim Marshall, Alan Page, Gary Larson, Carl Eller pose during NFL football practiced in Minneapolis. Helmets have evolved from the original hard leather of the NFL’s infancy to hard polycarbonate single-piece shells with various amounts of padding and air bladders that served as the primary form of head protection into the beginning of this century. (AP Photo/File)

Carl Eller played alongside Alan Page as a member of the “Purple People Eaters” and was one of the players who played in all of the team’s four Super Bowl appearances.

He played 15 seasons with the Vikings and recorded 23 fumble recoveries during his career. He was a six-time Pro Bowler and a five-time First-Team All-Pro selection.

He was inducted into the Hall of Fame in 2004 as well as the NFL 1970s All-Decade Team and the Vikings’ Ring of Honor.

5:00 PM ET Texas reliever Kamron Fields announced he will be transferring to Texas Southern in Houston, saying he is...

4:48 PM ET Maryland has suspended voluntary workouts for its football program after nine individuals -- not necessarily all football...