Baker Mayfield 2020 outlook: Evaluating the Browns’ QB’s down 2019 and how he can take next step 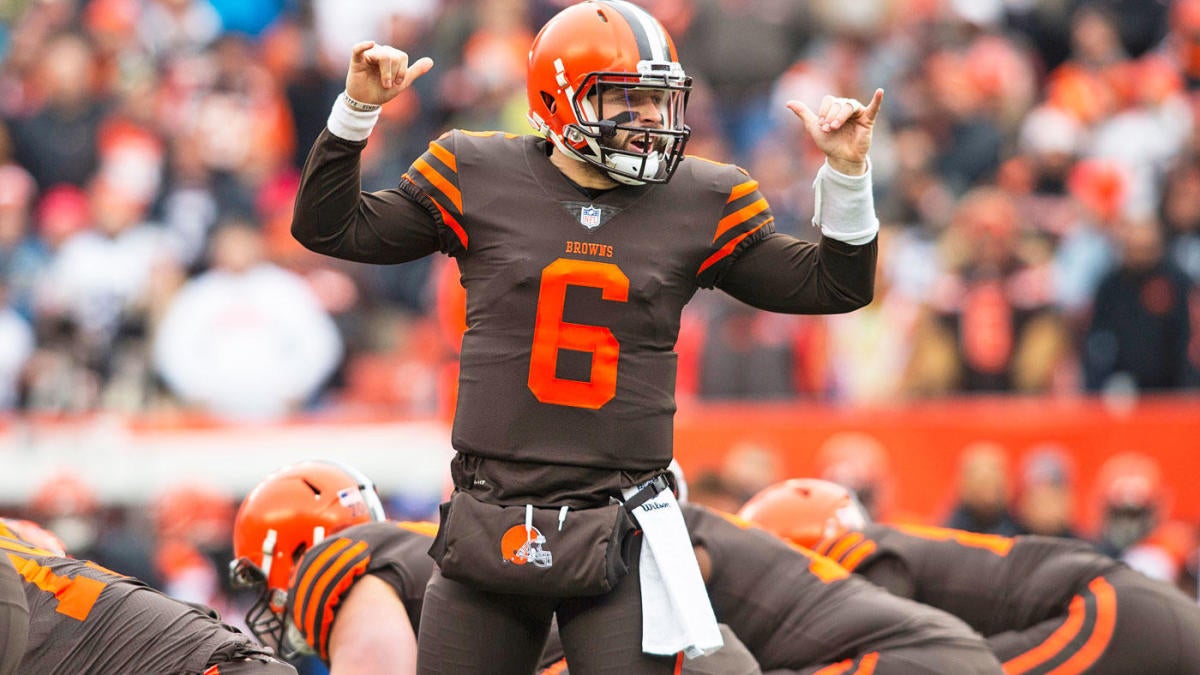 After setting the rookie record for touchdown passes in 2018, Baker Mayfield had a down second season on a Browns team that ultimately fell short of massive expectations.

With the fate of Cleveland football firmly in Mayfield’s hands, let’s explore everything about his environment with the Browns and what Mayfield needs to do to take the next step as a quarterback.

How Mayfield has improved since he was a prospect

These positive developments in a quarterback’s game are noteworthy because they indicate the distinct possibility of future growth.

Here’s a snippet of what I wrote about Mayfield before the draft, and my pro comparison for him was Case Keenum:

The Mayfield and Keenum stories are fascinating and extremely telling as to the current state of the NFL and the direction in which offenses are headed. Keenum had a ridiculously productive collegiate career in Houston’s spread, pass-happy, shotgun-only offense from 2007 to 2011. The 6-foot-1, 208-pounder exhibited decent athleticism and fine touch downfield. He consistently found open targets quickly and hit them accurately … then went undrafted. At a similar size, with a similar collegiate career and similar strengths, Mayfield is likely to be selected in the top 10 — or top 6 — in the most-hyped quarterback class in 35 years. Mayfield has a stronger arm than Keenum, but the now Broncos signal-caller showed elite-level pocket drifting in 2017 during a career year in which he was one of the most efficient passers in football. Mayfield flashed pocket-drifting skills but does drop his eyes while under pressure more often than you’d like from an early first-round selection.

He finished with the sixth-highest grade in my season-long evaluation of all the plays of first- and second-year quarterbacks (out of 17 who played). Mayfield never received an “A” grade all season but had just one “D+.”

Full disclosure here, it’s nearly impossible to distinctly point to an area of Mayfield’s game that’s truly improved since his illustrious stay at Oklahoma. His collegiate film was bonkers regardless of the angle of dissection. So how and why did I have him as my QB5 in that draft class?

Sometimes you just get a feeling about a prospect. And for as much as I actively try to avoid “gut feelings,” I had a feeling less positive than the consensus that year regarding Mayfield. Why? I remember my exact cause for concern. He was only pressured 27.3% of the time during his final season with the Sooners, and to me, a fair amount of those pressures were strictly due to bad decisions by him moving inside the pocket and toward defenders. I didn’t think he was prepared to handle what would be considered a normal amount of pressure in the NFL.

Beyond that, the situation in Lincoln Riley’s offense was, to this day, the most luxurious situation for a quarterback I’ve ever scouted. Two future first-round receivers in Marquise Brown and CeeDee Lamb. Third-round — and now stud — tight end Mark Andrews. Up front, five blockers were ultimately selected inside the top 125 picks in their respective drafts (Orlando Brown, Cody Ford, Bobby Evans, Dru Samia, and Ben Powers).

Lastly, Riley’s system was/is the most creative in all of college football with wild misdirection and RPOs galore, and he ran it in a conference with a reputation of porous defense. I felt Mayfield would never be in as wonderful of a situation in the NFL, and to date, that’s proven to be true.

Trapasso joined Will Brinson on the Pick Six Podcast to talk about what young QBs must do to take the next step; give it a listen below and be sure to subscribe on your favorite podcast platform.

Cleveland’s skill-position talent is plenty good enough for Mayifled. There’s no doubting that. And it starts with Odell Beckham and Jarvis Landry, easily one of the most dynamic one-two punches at receiver in football. Both went over 1,000 yards in 2019, and Landry set career highs in yards, and importantly, yards per grab (14.1).

John Mackey award winner Harrison Bryant was picked in Round 4, and although he tested poorly at the combine, he looks extremely athletic and fluid as a receiving tight end on the field. Legendarily explosive receiver prospect Donovan Peoples-Jones (44.5-inch vertical, 139-inch broad jump) was drafted in Round 6. Rashard Higgins is back on a one-year deal. David Njoku’s healthy. Mayfield has weapons.

Nick Chubb is an elite young running back who’s reached the 5.0 yards-per-carry mark in each of his first two seasons in the NFL and amazingly did so on 298 rushes last season. Per PFF, he’s forced the most missed tackles in the league (110) since entering it as a second-round pick in 2018.

At just under 5-foot-11 and 227 pounds with 4.52 speed to go along with his contact balance and elusiveness, Chubb screams franchise back. And along side him is Kareem Hunt, who led the league in rushing yards as a rookie in 2017 and averaged a hefty 5.8 yards per touch in eight games in Cleveland last year.

Maybe most importantly, the Browns didn’t mess around filling holes on the offensive line this offseason. Jack Conklin was signed to a deal in free agency with $30 million fully guaranteed, which made him the second-highest paid right tackle in the NFL. At No. 10 overall in the draft, Cleveland selected athletic road-grader Jedrick Wills from Alabama. He’s locked into the left tackle position.

Entering his third professional season, Mayfield will have his third head coach and fourth offensive coordinator. Yikes. But new head coach Kevin Stefanski comes in with a quality track record relative to his young age (38).

He was essentially a Vikings lifer before being hired by the Browns. He started his career coaching in the NFL in 2006 in Minnesota and wore a variety of hats on the offensive side of the ball before getting the interim offensive coordinator label in December of 2018 and earning the full-time gig last season.

The Vikings finished 10th in Football Outsiders offensive DVOA in 2019 and 16th in pass offense DVOA in 2018, a season in which Stefanski started as quarterbacks coach.

Ironically, he was also the quarterbacks coach during Keenum’s phenomenal, breakout season in 2017. Before that year, Keenum had a career 58.4% completion rate, a 3.1 touchdown percentage, 2.6 interception rate, and 6.7 yards-per-attempt average. In 2017 in Minnesota, Keenum connected on 67.6% of his throws, 4.6% of which went for touchdowns to just 1.5% ending in an interception. He averaged a bulky 7.4 yards per attempt.

Stefanski operates a wide-zone based blocking scheme and, much like Sean McVay and Kyle Shanahan who start with a similar run-game foundation, he tries to make run/play-action plays look identical to keep the defense guessing. Stefanski should be a calming, positive influence on Mayfield this season.

While watching every single play from Mayfield in 2019, a recurring theme was his propensity to drift into pressure to make things more difficult for himself. Thankfully, PFF tracks quarterback pressures charged to, yes, the quarterback, not just the offensive line.

Mayfield dropped back to pass 592 times and was pressured 33.4% of the time, a decently high but not ridiculously high figure. That equates to 198 pressured drop backs last season for the former No. 1 overall pick, and PFF labeled 33 of those to Mayfield himself.

That means 16.6% of the instances in which he was under duress were deemed his own fault. And while I can’t tell you how that compares to the rest of the league, I do know it’s a higher rate than Josh Allen had and much higher than Sam Darnold had in 2019.

His line didn’t necessarily do him any favors. Yet it’s not as if Mayfield was majestically moving away from pressure but was simply overwhelmed by an avalanche of pass rushers thanks to routinely porous blocking and that was the lone reason for his down year.

Mayfield has to get the ball out quicker and slide away from defenders more efficiently while limiting the instances in which he invites pressure by doing the opposite of those two key elements of successfully playing the quarterback position.

Surprisingly, he needs to improve his ball placement on the short-to-intermediate range throws, an area in which he took a big, unforeseen step back in 2019.

Mayfield has always been an impressive — and aggressive — downfield thrower of the football. While his on-target rate on throws 20+ yards down the field was four percentage points under the league after in 2019 according to PFF (38% vs. 42%), he was credited with a “Big-Time Throw” rate of 30.3% on those long tosses, five percentage points higher than league average.

With Beckham, Landry, and athleticism at the tight end position, Mayfield needs to build on two strong seasons ripping beautiful balls deep down the field.

And guess who was easily one of the best deep passers in football last season? Stefanski’s quarterback Kirk Cousins. Both his on-target and Big-Time Throw rates on long throws were above league average, and he had a 119.7 passer rating on throws made 20-plus yards down the field.

Mayfield wasn’t nearly as bad in 2019 as his 78.8 quarterback rating or 59.4% completion rate would indicate. The gorgeous throws were there every game. But the bad decisions, errant tosses, and panicky play inside/outside the pocket was there too, and we didn’t see much of that during his rookie season.

His line should be noticeably better, which could allow him to get more into rhythm during games and not immediately think about where the pressure will come from after he catches the shotgun snap. That all should help. His skill-position talent is solidly deep and boasts top-end talent in Beckham and Landry.

While a 38-year-old first-time head coach, Stefanski should be an asset for Mayfield too, and I like that the third-year quarterback will be often utilized in the play-action bootleg game. The rolling pockets will likely mask some deficiencies up front, and there very well could be some growing pains with a rookie tackle making the switch from the right side in college to the left side in the pros. And I love that Stefanski was a vital component in Keenum’s career year in 2017. Stefanski will be working with a similar but more talented quarterback in Mayfield.

Despite an environment unquestionably more conducive to quarterback success than a season ago, I still have legitimate concerns about Mayfield dealing with pressure and the moments in which his average-at-best athleticism for the position hinders his true play-making ability when things aren’t perfect.

He should post better numbers than he did a season ago, yet, right now, I’m not predicting a breakout season.

Watch Now: Time to Schein: Patrick Mahomes' deal does not impact Dak Prescott's negotiations with the Cowboys (3:05) The NFC...

Watch Now: NFL Wagers: Best Regular Season Record (2:27) Despite turning 31 this offseason and having not played in a...