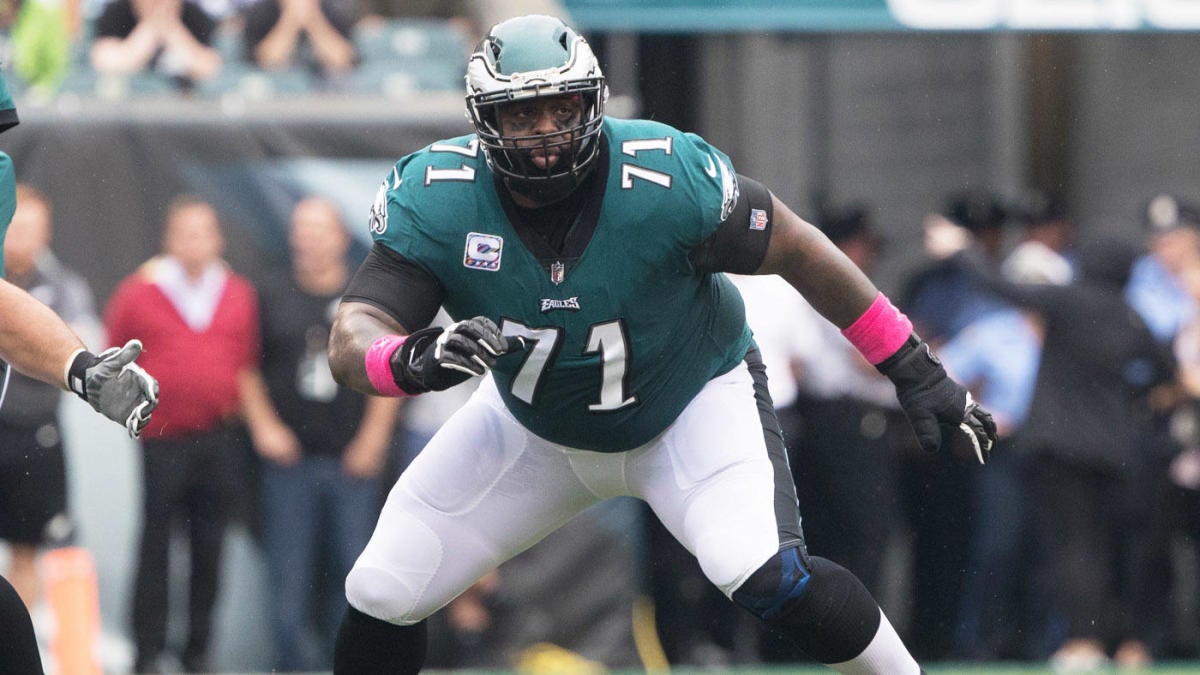 The Philadelphia Eagles suffered a major blow to their offensive line when Brandon Brooks was lost from the season after tearing his left Achilles tendon working out at the team’s practice facility. Brooks, rehabbing a shoulder injury, has suffered an Achilles injury for the second time in two years and had his third significant injury during that time span (left Achilles, right Achilles, dislocated shoulder).

Brooks only missed one game despite suffering two significant injuries in a calendar year, but the Eagles can’t expect to replace the one of the best guards in football. That doesn’t mean Philadelphia won’t have any options to fill in for Brooks for the 2020 season, even though the loss of the three-time Pro Bowl right guard is a crushing blow toward the team repeating as NFC East champions.

“My heart sunk when I got the news about Brandon’s injury, said Eagles head coach Doug Pederson in a conference call Tuesday morning. “This guy has worked extremely hard to get himself back and back in playing shape to have a solid 2020 season. So obviously we feel for him, to have to go through this again, but we know that he’ll push through and he’s done a great job with all his rehab and getting himself back, so we’re very confident there.”

The Eagles are going to look at all options in finding a replacement for Brooks and keeping their offensive line as one of the best in the NFL. The Brooks injury is devastating, but the Eagles have time on their side in finding a suitable replacement.

Who are the top options to replace Brooks? Let’s take a look at the internal and external options available for the Eagles over the coming weeks:

This is the natural fit for the Eagles, especially since Pryor has spent the past two years as the understudy for Brooks at right guard. A sixth-round pick out of TCU in the 2018 draft, the Eagles have been impressed with how Pryor has handled the transition to guard from tackle (where he played in college).

Pryor played 79 snaps in 12 games in 2019, but filled in for Brooks when the Pro Bowler suffered an anxiety attack in a Week 12 loss to the Seattle Seahawks and when Brooks injured his shoulder in the Week 17 win over the New York Giants. He started the NFC wild -card playoff loss to the Seahawks, giving up a sack, three hurries and four pressures, and playing much better than expected.

“These guys have to understand that there’s a little bit of a sense of urgency once we get into training camp,” Pederson said. “Things are going to move fast. Things are going to move fast and we as coaches need to evaluate these players. I have to put them in position to be successful to show what they can do and that’s everything that we are in the process of doing right now leading up to camp.”

Pryor isn’t Brooks (no one can be), but working with Eagles’ offensive line coach Jeff Stoutland this offseason will uncover his potential. He’s the front-runner for the job.

The 2019 undrafted free agent out of Stanford could be a dark horse for the right guard role. Herbig earned his way onto the 53-man roster after an impressive training camp, working as a backup center option behind Jason Kelce. He played the majority of his college snaps at left guard, allowing one sack, one quarterback hit and seven hurries in 228 pas-blocking snaps his final year at Stanford  — while also ranking No. 1 in the nation in run-block success percentage at 94.7%.

If Pryor slips up during training camp, look for the Eagles to give Herbig a shot here. The Eagles value offensive linemen who can play multiple positions, which Herbig provides to this team. Playing right guard shouldn’t be an issue, even if Herbig doesn’t get the starting job.

A fourth-round pick out of Auburn, the Eagles drafted Driscoll as a tackle, but he played left guard at the University of Massachusetts and spent the offseason learning center. To say the least, the rookie is versatile.

The one thing that’s keeping Driscoll from winning the job? Rookies have not participated in minicamp due to the coronavirus pandemic, so Driscoll will be behind the 8-ball at the start of training camp. The Eagles typically don’t play rookie offensive linemen under Pederson, so Driscoll has that working against him.

Philadelphia also needs a backup right tackle option in case Lane Johnson were to go down with an injury. The Eagles might just keep Driscoll at right tackle.

Opeta is a long shot to start at right guard, but he is a candidate. The Eagles thought highly enough of Opeta as a developmental project when they signed him as an unrestricted free agent out of Weber State in 2019. Opeta signed a reported guaranteed contract of $80,000 to sign with the Eagles ($55,000 guaranteed, $25,000 signing bonus), which was among the highest of the undrafted free agents in the league. Didn’t hurt the Eagles promoted him to the active roster in Week 14 of last season so other teams couldn’t snatch him up.

Opeta has never played a snap in the NFL, so the odds are against him to start. Opeta needs a strong training camp and preseason to even make the roster, but he’ll get an opportunity to show the Eagles how well he’s progressed at both guard spots.

Bringing Peters back makes even more sense for the Eagles now that Brooks is lost for the season. The Eagles needed a backup tackle anyway, but it’s even more important Peters returns for a 12th season with the team. Don’t rule out the Eagles giving Peters the opportunity to play right guard and especially don’t laugh at the possibility Peters will play well at guard.

If you don’t think Peters can do it, think again. Peters may be 38 years old, but his goal is to play until he’s 40 and even hinted at the possibility of switching to guard if that prolongs his career.

Could Peters actually play the right side of the offensive line? He’s done it before as a right tackle for the Buffalo Bills in 2004 and 2005 and also volunteered to play right tackle if Lane Johnson missed a Week 13 matchup with the Miami Dolphins last season (Johnson was able to go). Peters knows the ins-and-outs of the system and won’t miss a beat if the Eagles re-sign him. Philadelphia is actually lucky he’s still on the market.

If anyone can come in and play at a high level at right guard, it’s Peters. Don’t doubt him.

Warford is the top free agent option (that has actually played guard) available for the Eagles, should they choose to go that route. Warford turns 29 later this week and has made the Pro Bowl with the New Orleans Saints three consecutive seasons. So why is he on the open market?

The Saints needed cap room and cutting Warford saved them $7 million in cap space (Warford was heading into the last year of his four year, $34 million deal). New Orleans drafted Cesar Ruiz in the first round of this year’s draft, signed Andrus Peat to a lucrative extension, and want to give Erik McCoy a shot at guard.

Warford can still play at a Pro Bowl level and may be the closest thing the Eagles have at replacing Brooks. He also will cost a lot of money for a team that is trying to save as much cap space as possible. If Warford wants a multi-year deal, he may be off the table for the Eagles. A one-year deal will be beneficial to both the Eagles and Warford, who can play for his next massive contract with a great season in Philadelphia.

This option developed as soon as this week, once Long admitted he didn’t actually retire, but was fired from the Chicago Bears. Long admitted on Twitter he will know whether his football days are over within the next few weeks, so the Eagles would have to be patient if they wish to sign Long.

One thing Long has going for him is older brother, Chris Long, was a well-respected figure in the Eagles locker room for two seasons. Long also thinks very highly of the Eagles organization, so his word will mean something if Long contemplates a return and is finding his next team.

A three-time Pro Bowler from 2013 to 2015 (making the Pro Bowl at guard and tackle), injuries affected Long from recapturing the dominance early in his career. Long played in just 29 games over the past four seasons, failing to play half a season in three of those years. The injuries Long suffered throughout the past four seasons include a torn labrum and strained triceps, as well as foot, ankle and shoulder pain recurring from the labrum injury suffered in 2016.

Long signing with the Eagles is a long shot, especially since he thinks he’ll be “most likely on golf courses instead.”

Leary started at right guard for the Denver Broncos last season before missing the final four games with a concussion. He has been cleared since, but has a history of injuries that are concerning. In addition to two concussions in his career, Leary suffered a torn Achilles and a back injury within the last three years. He also had groin problems with the Dallas Cowboys.

Leary has never made a Pro Bowl, but injuries have kept him from reaching that level. He started at right guard for the Denver Broncos in two of the last three years (the other at left guard), playing 23 games and missing nine.

Now 31, Leary is a short-term replacement should the Eagles choose to sign him. He has experience in the NFC East, but the Eagles may be better off pursuing the other available options.