Bud Selig presided over a canceled World Series, which would seem to be about as bad as it gets for a baseball commissioner’s legacy. Yet his successor, Rob Manfred, may sink even lower. Manfred just might cancel the entire 2020 season.

On the First-Year Player Draft broadcast last week, Manfred said with absolute certainty — “100 percent” — that there would be a Major League Baseball season this year. On Monday, he told ESPN he was “not confident” there would be a season at all, because of the acrimony with the players’ union.

“It’s just a disaster for our game, absolutely no question about it,” Manfred added. “It shouldn’t be happening.”

He got that right, at least. But Manfred’s blatant contradiction will haunt him, if he indeed refuses to stage a season. Whatever the outcome, he has already given whiplash to the fans — those who still care, anyway — and further provoked the players. He is failing in his responsibility as a steward of the game.

Manfred and the hard-line owners are terrified of walking into a trap by offering the players’ union a schedule before agreeing on health and safety protocols. That could potentially bring legal action from the players, so the safest route — to a large-enough segment of owners — is to blow up the season and save a lot of money.

If they cancel the 2020 season, rather than implement a mini-schedule of, say, 48 games instead of the usual 162, the owners would save about $1.2 billion in pro-rated player salaries. They also would save themselves the risk of losing another $1 billion or so if an arbitrator sided with the players in court this winter.

Manfred has told the players’ side he will not hold a season unless the union agrees to waive its right to sue, the kind of ultimatum seemingly designed to be rejected. It is the latest attempt by Manfred to jolt the union into action, after weeks of claiming he would simply implement a schedule whether they liked it or not.

The union called his bluff on Saturday night, when Tony Clark, the executive director, said in a statement directed at the league: “It’s time to get back to work. Tell us when and where.” Now Manfred seems determined to not give Clark that satisfaction, citing the legal threat and the potential embarrassment of some stars simply refusing to play. 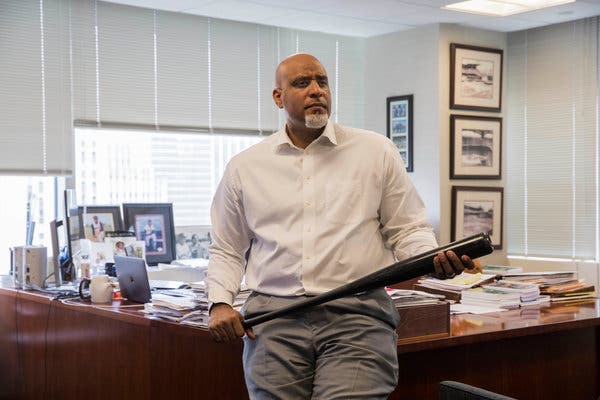 Manfred should have lived up to his words and given the players a schedule, risks be damned. He should know that canceling the season simply cannot be an option, unless he truly learned nothing from Selig’s example.

Selig did a lot of good for baseball — he deserves his spot in the Hall of Fame — but he will never escape the boulders chained to his ankles. Like a Dickensian ghost, Selig will forever drag the 1994 strike and the steroids scandal that followed.

In retrospect, baseball’s generation of chemically enhanced sluggers served to draw fans back to the game after the strike-shortened 1994 season. Baseball did not aggressively clean itself up until later, once it had finally recovered the fans it had lost. What will save baseball after its current mess?

In the short term, only genuine negotiation can save the league — and these sides cannot even settle on the meaning of their March 26 agreement on protocols for restarting the season. M.L.B. is considering filing a grievance for an immediate declaration of just what that March document stipulates — primarily whether players are entitled to their full pro-rated salaries without fans in the stands.

That issue is at the heart of the animosity between the two groups: Players have not budged from their stance, while owners’ proposals have all included further pay cuts. All along, the sides have almost willfully refused to hear each other. They have never seemed to consider the enormous good-will boost that reviving their sport during a pandemic would bring. They have turned this into a collective-bargaining negotiation instead of a mutually beneficial collaboration for the greater good.

How did it get this way, especially under Manfred, a lawyer with decades of experience as a canny dealmaker? He is notoriously hesitant to impose rules without negotiation; he held the power to implement the much-discussed pitch clock, but backed off when players made clear that they did not want it.

Yet Manfred has been unable to cultivate trust with the union since the death of Michael Weiner, the former executive director who died of brain cancer in 2013 at age 51. The last collective bargaining agreement, signed in 2016, was negotiated with Clark — the former All-Star whom Weiner chose as his successor — but is generally favorable to the owners. With that deal set to expire in December 2021, the union is wary of conceding anything now that may affect the next C.B.A.

Clark’s statement on Monday, in response to Manfred’s comments, shows just how severely their relationship has eroded.

“Players are disgusted that after Rob Manfred unequivocally told players and fans that there would ’100 percent’ be a 2020 season, he has decided to go back on his word and is now threatening to cancel the entire season,” Clark said.

“Any implication that the Players Association has somehow delayed progress on health and safety protocols is completely false, as Rob has recently acknowledged the parties are ‘very, very close,’” he added. “This latest threat is just one more indication that Major League Baseball has been negotiating in bad faith since the beginning. This has always been about extracting additional pay cuts from players and this is just another day and another bad faith tactic in their ongoing campaign.”

Players pointed to the sale of the Kansas City Royals last year for $1 billion as an example of the sport’s profitability.Credit…Jamie Squire/Getty Images

They also noticed when some owners initially refused to pay minor leaguers, or to cut their pay, during the pandemic. Some players, like David Price of the Los Angeles Dodgers and Shin-Soo Choo of the Texas Rangers, have been paying minor leaguers an extra monthly stipend out of their own pockets, a noble gesture that should be humiliating to owners.

Alas, the next generation often seems of little concern to the league. M.L.B. will likely shutter dozens of minor league franchises next season, and it slashed last week’s draft to five rounds, from 40. Both are short-sighted moves that will shrink the game’s overall reach, drain its talent pool and drive away people who could help grow the sport, whether they reach the majors or not.

Sadly, though, those decisions are consistent with the strategy of a league that has now committed virtual treason against the fans by publicly floating the idea of canceling the season, just days after Manfred promised otherwise. It is a shameful abdication of leadership.

ESPN’s most prominent basketball reporter has been suspended for a two-word vulgar email reply to the office of a United...

In early March, as the coronavirus was spreading across the United States and testing capacity was already a problem, Bill...