Locker Rooms Are Petri Dishes. Can the N.F.L. Clean Up Before Training Camp?

In this most unusual off-season roiled by the coronavirus pandemic, the N.F.L. has adapted by conducting business (mostly) as usual. Free agency, the college draft, rookie camp and voluntary workouts were all held on time, albeit remotely instead of in person.

The league may have a harder time sticking to its plan to open training camps at their usual time in late July. While the N.F.L. and the N.F.L. Players Association have created guidelines that let coaches and team staff return to their offices, they have yet to figure out how several thousand players can attend training camps safely even as confirmations of infected players emerge.

This week, the agent for Dallas Cowboys running back Ezekiel Elliott confirmed that his client had tested positive for the virus. Other members of the Cowboys and players for the Houston Texans have also reportedly tested positive.

Though the league in early June expanded on an earlier memo detailing plans to fully reopen team facilities, at least one coach, John Harbaugh of the Baltimore Ravens, called them impossible to follow. The players’ union on Monday told agents there were still no guidelines established for testing protocols or rules on distancing and equipment for players’ mandatory return to training camps, according to a source who participated and spoke on condition of anonymity.

The lack of guidance on the swift-approaching return has left many in football unsure about safety in an environment that requires contact on nearly every play and cramped quarters in locker rooms.

“The disease is airborne, so it can come from anywhere, and you have to keep people away from each other, but the game is literally sweating, bleeding, spitting on each other all the time,” said D.J. Reader, a nose tackle who signed a free-agent contract with the Cincinnati Bengals this off-season. “Everyone wants to play, but nobody has any answers.”

The union declined to comment about the status of negotiations with the league on the next round of guidelines. But the rules for allowing coaches and staff to work in team facilities, which the league released in May and expanded upon last week, are complicated enough. Employees must be divided into three tiers, each with a different level of access to locker rooms, weight rooms and other places. Teams must follow guidelines for providing meals and medical services, cleaning their facilities and testing employees. Coaches have been slow to return to their offices.

Last week, the union’s president, J.C. Tretter, told players they should listen to the union for guidance, a suggestion that coaches, doctors and team staff may be providing conflicting information.

The guidelines are bound to become more complicated when 90 players for each team show up for training camp and locker rooms are filled to capacity. “I’m pretty sure the huddle is not going to be six-feet spaced,” Harbaugh said in an interview with a Baltimore radio station. “Are guys going to shower one at a time all day? Are guys going to lift weights one at a time all day? These are things the league and the P.A. needs to get a handle on and needs to get agreed with some common sense so we can operate in a 13-hour day in training camp that they’re giving us and get our work done.” 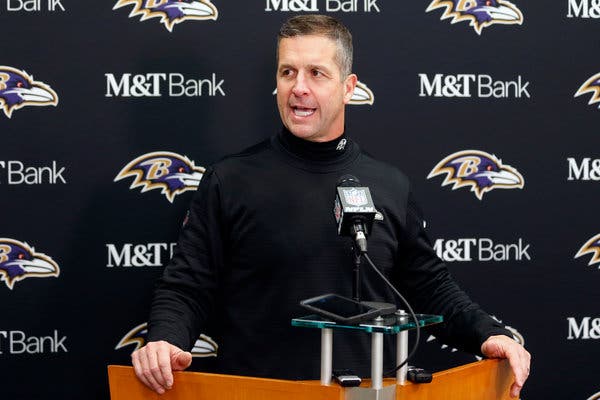 “I’m pretty sure the huddle is not going to be six-feet spaced,” John Harbaugh, the Baltimore Ravens coach, said in an interview. Credit…Ron Schwane/Associated Press

The league’s goal of opening training camps on time has become more complex because of the surge in Covid-19 virus infections in Arizona, Florida, Texas and other states where N.F.L. teams are based. The league has said that it will open all training camps simultaneously to preserve competitive balance, and that teams must train in their own facilities, preventing any from moving camps to states where infection rates are lower.

The publicly confirmed cases of coronavirus in the league are thought to have been transmitted outside N.F.L. facilities. In March, New Orleans Saints Coach Sean Payton was the first known member of the N.F.L. community infected, after attending a horse race in Arkansas. In April, Von Miller, the Denver Broncos linebacker, said he had also tested positive for the virus.

On Monday, Roger Goodell, the league commissioner, told ESPN that some players were bound to test positive. “The issue is, can we obviously prevent as many of those from happening, but treat them quickly, isolate them and prevent them from directly impacting our player personnel?”

If college football is any guide, the number of infections may surge when N.F.L. players report to camp. Last week, the University of Houston suspended voluntary workouts after six players tested positive for the virus. Athletes at Alabama, Auburn, Clemson, Iowa State, Marshall and Oklahoma State have also tested positive.

The N.F.L. and the union agreed in March to jointly develop procedures for the off-season, and their partnership has been largely cooperative. But most of the guidelines they have developed have applied to nonunion members, like coaches and front office staff, reporting to facilities. Guidelines for players largely pertained to how they worked at home. Finding a way to reduce the risk of infection for the players will be harder because of the sheer volume of people who will have to share many common spaces, like locker rooms and weight rooms.

“It’s a petri dish, football locker rooms,” said James Acho, a lawyer who has represented retired N.F.L. players in health disputes with the league. “These guys are going to be on top of each other. It’s almost humanly impossible to physically distance.”

Catapult, a company that uses GPS and radio frequency technology to track the movement of players on the field, developed new software that can calculate how close players stand near each other and for how long. Jamie Hepner, who is in charge of the football performance division at the company, said the technology can calculate the proximity between players down to a single foot. It is available to the 19 N.F.L. teams that use Catapult.

“There are certain things in football that are what they are, like the distance between the center and the guard,” Hepner said. But “if you have fewer positive cases, you’ll see fewer guys out of practice.”

The players’ union held a conference call for agents on Monday, but according to a number of players and agents on the call, the union provided only a handful of training camp guidelines that are under consideration. One of those ideas is to test players for the coronavirus about three times a week and to isolate players who test positive, according to NFL.com.

Forced to remain at home, many players who have signed new contracts have been unable to take physicals and thus have not received their signing bonuses. (One exception is Tom Brady, who found a doctor to give him a physical in March.) At the same time, some players have pre-existing conditions or are at higher risk for others, like sleep apnea and obesity, that make them vulnerable to contracting Covid-19. Some players may also engage in risky behavior, such as not wearing a face mask.

“I don’t think we’re immune” from getting the virus, Reader said. “All of us can get sick.”

FC Dallas Withdraws from M.L.S. Tournament Because of Virus Cases

Major League Soccer pulled FC Dallas out of its tournament near Orlando, Fla., after 10 players and a staff member...

N.H.L. and Players Agree to Start Postseason Tournament on Aug. 1

The National Hockey League and its players union announced on Monday that the two groups agreed on a four-year extension...