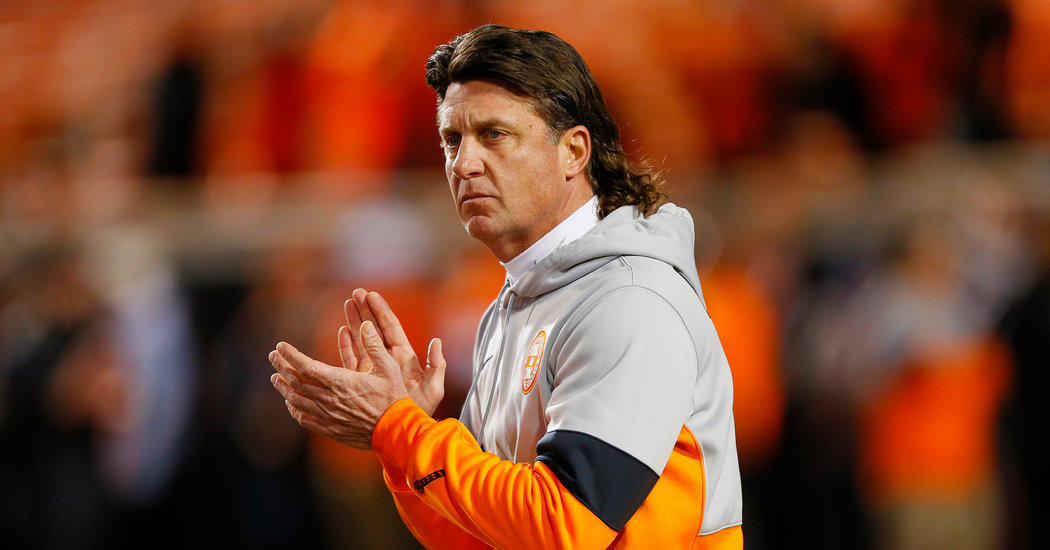 Mike Gundy, the winningest football coach in Oklahoma State’s history, apologized on Tuesday after he stirred outrage by wearing a T-shirt with the logo of a right-wing cable channel that aired commentary calling the Black Lives Matter movement “a farce.”

Gundy’s apology and his public distancing from the One America News Network came after current and former Oklahoma State athletes condemned his decision to wear the shirt. The open outrage, a reflection of the growing power of players across college athletics, included criticism from Chuba Hubbard, Oklahoma State’s premier tailback, who issued a public warning on Monday that he was prepared to boycott the university.

Although Hubbard quickly retreated from that threat, Oklahoma State and Gundy still faced substantial criticism, not least because the coach has been a persistently contentious figure in college football.

Although Gundy has achieved remarkable successes on the field — his 2011 team, for instance, finished ranked No. 3 — his status became suddenly fragile after a fishing trip, apparently on Lake Texoma at the Texas-Oklahoma border this month, in which he donned a T-shirt promoting O.A.N. The network, which President Trump has often openly favored, has amplified conspiracy theories and been strident in its support of the administration.

Gundy’s choice, memorialized in a photograph that appeared on Facebook, drew a swift backlash from within Oklahoma State’s locker room.

“I will not stand for this,” Hubbard, the nation’s top rusher last season, wrote on Twitter. “This is completely insensitive to everything going on in society, and it’s unacceptable. I will not be doing anything with Oklahoma State until things CHANGE.”

Teven Jenkins, an offensive lineman, said soon afterward that his unit supported Hubbard. And Justice Hill, who played at Oklahoma State before the Baltimore Ravens drafted him last year, said the university and its athletic department “need major change.”

Oklahoma State administrators swiftly signaled their concerns, and within hours, Gundy and Hubbard appeared together in a video that appeared to signal an easing of tensions. Then, on Tuesday afternoon, Gundy spoke again, this time by himself to offer an unambiguous public apology after a meeting with his team.

“Once I learned how that network felt about Black Lives Matter, I was disgusted and knew it was completely unacceptable to me,” he said. “I want to apologize to all members of our team, former players and their families for the pain and discomfort that has been caused over the last two days.”

Gundy, 52, succeeded Les Miles in 2005 as the coach at Oklahoma State, where he played quarterback in college. Since then, he has won 129 games, including nine bowls, even as he sparked public relations headaches for administrators.

In 2007, a televised tirade against a newspaper columnist — punctuated by the memorable moment in which he declared “I’m a man! I’m 40!” — briefly directed much of the sports world’s spotlight toward the campus in Stillwater, Okla. (To some fans, it also made him something of a deity.)

More recently, he drew attention when he said he pressed for a rapid return to normalcy during the coronavirus pandemic. He later apologized.

The battle over the name of the Washington, D.C., N.F.L. team deepened on Monday as President Trump defended it even...

Quarterback Patrick Mahomes, one of the N.F.L.’s biggest stars, has signed a 10-year contract extension with the Kansas City Chiefs,...