Daniel Berger earned $1.35 million Sunday for winning the PGA Tour’s first tournament after a three-month layoff caused by the coronavirus pandemic. But on Monday Berger was entitled to something more precious: a first-class seat on the special flight the tour chartered to safely shuttle players and their caddies to the next event on the tour.

Space on the charter costs $600 per golfer — $300 for caddies — but first-class seats are cherished and subject to a defined pecking order based on players’ career achievements. Even with nearly $16 million in lifetime PGA Tour earnings, Berger would not likely have qualified. Hoisting Sunday’s championship trophy, however, meant Berger could jump the line for an upgrade.

Welcome to professional sports in a pandemic — winning still equates to status, especially if it comes with access to the cushiest part of safety protocols.

Last week, golf was the trial balloon in major American sports as one of the earliest to return to competition. If other leagues plotting their return this summer are wondering what lessons there are to be learned from the PGA Tour’s experience, here’s one: The athletes adjust, and always keep their eyes on the prize(s).

Days before his dramatic, come-from-behind victory at the Charles Schwab Challenge in Fort Worth, Berger made other arrangements to travel to this week’s PGA Tour event, the RBC Heritage on Hilton Head Island, S.C., and declined his first class seat. The decision before Sunday’s final round was probably less based on a lack of self-belief and more likely a gesture of practicality since the leaderboard was stacked with a host of surging top golfers.

More than 100 other pro golfers did line up on Saturday to take the saliva test for the coronavirus, since a negative result was required in order to board the charter after the tournament. There were no evident objections to undergoing another test, an about-face among players who had done plenty of grumbling when the invasive swab test was administered earlier in the week upon their arrival in Fort Worth. 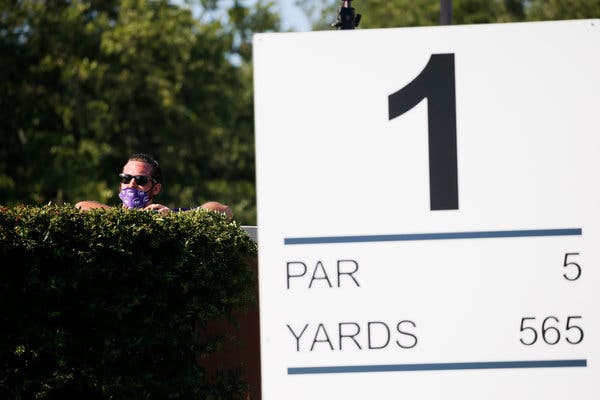 The tournament was held without fans allowed on the Colonial Country Club course, a decision likely to be replicated by other leagues returning to play.Credit…Raymond Carlin Iii/USA Today Sports, via Reuters

The malleability of highly compensated golfers in the span of a few days might also be noteworthy for other sports organizing their returns to play. Elaborate testing — PGA Tour players were also screened daily for fever and had to fill out tracing questionnaires — was not viewed as an imposition but instead may have instilled a welcomed sense of security. In the end, after a lengthy time in some form of quarantine at home, some players considered the environment almost liberating.

“I knew that all of the employees and staff that were here were doing the same testing as I was and I felt completely safe,” said Berger, who called the coronavirus “such a big part of our lives for the last two months.”

But at last week’s tournament, Berger said: “I thought about the virus very few times.”

What was on Berger’s mind instead, during a time of considerable upheaval, revealed that some things never change.

“That you don’t get that many chances out here to win,” he said. “I’m glad, and proud, I hung in there.”

Berger won while being among those golfers who meticulously followed the recommended safety guidelines for the event. Not all of his brethren seemed as intent on adhering to stated protocols.

That the PGA Tour had tested every player and caddie — about 500 people total including officials — without a positive result may have emboldened the collective to believe they were in a coronavirus-free bubble because many players regularly fist-bumped each other and often stood shoulder-to-shoulder on tee boxes. Caddies and players regularly handed clubs back and forth. During the tournament, PGA Tour officials reminded caddies about the recommended procedures when it came to handling flagsticks, bunker rakes and players’ golf bags.

Other players were far more strict about adhering to safety restrictions, like not congregating in groups.

“I went into the locker room one time on the first day,” said Bubba Watson, who stayed in a motor home during the tournament. “Then I never went back in there. I just washed my shoes and everything at my bus.”

As for the atmosphere of a sporting event held without spectators, a stipulation likely to be replicated in other pro sports, nearly every golfer acknowledged it was an oddity, before remarking that the entire experience of returning to a changed competitive environment after a long layoff had been an awkward adjustment. Some thought the quiet of a fan-free golf course might have actually helped them make the transition.

“Honestly, it might have been better for starting out because I was already nervous because I hadn’t played in a while,” said Justin Thomas, the world’s third-ranked golfer. “With fans it would have been really, nerve-racking.”

Jay Monahan, the PGA Tour commissioner, said on Sunday that he had heard from some leaders of other pro sports leagues. “I know there’s a lot of people that are watching us,” Monahan said, “and hopefully they’re proud of what’s been done here.”

But Monahan also conceded that a successful resumption of the PGA Tour will not be complete until the tour proves it can safely take its show on the road this week to South Carolina and then to Connecticut and Michigan in the weeks after that. Charter flights, with perks like first-class upgrades for tournament winners, will help, but there are also many other factors at play.

“This is about a sustained return,” Monahan said.

The PGA Tour’s Memorial Tournament, scheduled next week in central Ohio, had hoped to pave the way for spectators to...

An Unlikely Source of Catharsis for a Black M.L.B. Player: Social Media

Tony Kemp felt, in his words, depressed. Soon after George Floyd’s death in May, with enduring protests about racial injustice...