The Premier League Is Back. England’s Griping About It Never Stopped.

Through it all, the noise never stopped. England’s stadiums have been dormant for 100 days. Outside, the coronavirus raged and the culture convulsed and the world seemed to pass from one reality to another. Inside, preserved in concrete, the grandstands sat silent and still and all but unchanged. The seasons turned. The grass grew.

There was nothing happening, nothing to talk about, nothing to dissect and discuss, but the noise never stopped. Soccer, the sports entertainment complex, is rooted in soccer the athletic endeavor, but it has long existed independent of it, too. The rhythm of the season lies in the games, the cups and the leagues, but it is the improvisation, off the beat, that provides the hook.

And so, in those 100 days without soccer, without the Premier League, England did not seem to stop talking about soccer. It asked if players should do more to help the country’s overburdened health service, if clubs should be allowed to use the government’s furlough scheme, if fans could be trusted not to gather outside stadiums they could not enter.

Most of all, though, as the death tolls mounted and the lockdown gripped, it asked again and again if soccer could return in the world of the coronavirus, or, more pertinent, whether it should. And then it asked, again and again, why everyone was talking about soccer so much.

Three months since it shut down, the Premier League returns on Wednesday. There is a full slate of games scheduled for this weekend, and barely a day will pass before the end of July when there is no soccer at all in England. All of it will be televised. Some of it, for the first time in 32 years, will even be broadcast free-to-air, on the BBC.

But while the saturation coverage illustrates the scale of the demand, it is through its absence that we have been able to see just to what extent soccer — and above all else, the monument to uncut neoliberalism that is the Premier League — has become England’s overwhelming obsession, its driving cultural force. 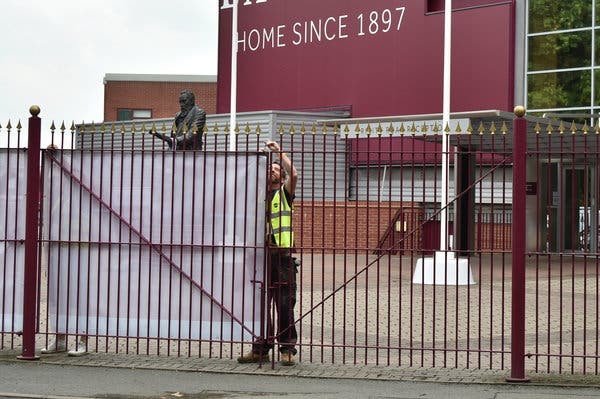 Workers spent Tuesday tying up any loose ends at Villa Park, where Sheffield United will visit Aston Villa on Wednesday in the first match of the restarted Premier League campaign.Credit…Rui Vieira/Associated Press

On March 14, the day after the Premier League was suspended, the BBC decided to give the Saturday night slot ordinarily occupied by “Match of the Day” to “Mrs. Brown’s Boys,” an Irish sitcom. It seemed a safe choice: “Mrs. Brown’s Boys” is for some reason a regular feature of the BBC’s weekend lineup, and draws an audience of millions, though you rarely meet any of them.

The backlash, though, was fierce. The Telegraph decried the switch as the “moment decency broke down forever.” Within days, the BBC confirmed it would not make the same mistake again. The slot would be taken by a retrospective discussion program featuring Gary Lineker, Alan Shearer and Ian Wright, three familiar faces from “Match of the Day.”

It has been the same across networks: Broadcasters have spent the last three months raiding their archives for whatever soccer they can find. Entire tournaments have been replayed and relived, and weekend afternoons have been given over to classic games, lulling their audiences into the blissful anesthesia of nostalgia, morphine for the soul.

On one level, of course, this proves just how much of a soccer nation England is. The Premier League, after all, ranks as perhaps Britain’s greatest cultural export: In 2018, it ranked first in the British Icon Index, ahead of Rolls-Royce, the BBC and the country’s universities. The Royal Family finished a disappointing 10th.

Alistair MacDonald, a senior policy analyst at the British Council, which promotes British culture abroad, wrote last year that the “international appeal” of the Premier League makes it the equal of “Apple and other global super brands.” MacDonald cited research from Ernst & Young that suggested Britain’s “world-leading sports teams and events were identified as the leading driver for intention to do business with the country.”

But it would be wrong to assume that England’s relationship with soccer — and the Premier League, in particular — is one of appreciation and admiration for what is, by almost any metric, a relatively rare success story.

England reveres the Premier League, relishes its status and revels in its supremacy — particularly in relation to other leagues — but it resents its scale and its prominence and its self-importance. It is addicted to it, hopelessly so, but it is repulsed by that addiction. It is a relationship of love and self-loathing.

The silence of the last three months has, for once, allowed the complexity of that relationship to be heard. It was there when Matt Hancock, the health secretary, demanded that the Premier League’s players — already part of the league’s overall $4 billion contribution to Britain’s tax income — “do their part” to help the National Health Service.

It was there when one of his colleagues, the lawmaker Julian Knight, accused soccer of acting in a “moral vacuum.” It was there when Liverpool and Tottenham, among others, announced that they planned to use the government’s furlough scheme to help offset the costs of the shutdown, and were promptly met with outright fury from their fans, and the public.

And most of all, it was there in the fraught discussion over how, and even if, the season should be resolved. That conversation was conducted not only between soccer fans and the public, but among soccer fans themselves, between those who longed for their passion to return, a signpost that life might once again return to normal, and those adamant that even thinking of a mere game demonstrated the most warped priorities.

To some extent, of course, it was a false dichotomy — it was possible to want soccer to come back, to end the season on the field, even while it felt too soon to be discussing it — and it was not always a discussion held in good faith. Much of the debate was rooted in tribal loyalty, in believing that what was best for your team — or what was worst for your rival — just so happened to be best for all.

But it was striking, still, to see lifelong fans of a club, or of a sport, rail against the meaning of that club, or that sport: to hear the conviction with which they claimed soccer did not matter, even if the consequence might be that their club suffered, or ceased to exist; to read of the anonymous executives convinced of the moral repugnance of trying to keep their business model, if not their industry, alive; to see, with the framework removed, how easily the ornament might be smashed.

All of it meant we could see clearly the bind in which soccer exists, this cultural force and community institution that has turned into a vast, corporate monolith. Clubs could not access government funds because they are perceived as nothing but lucrative entertainment businesses; nor could they look to minimize the damage to their industry by returning as swiftly as was safe because they are not just lucrative entertainment businesses.

We saw, too, how fragile our affection for corporate soccer is, how high the standards we demand of it can be and how easily it fails to meet them. The Premier League might be the central pillar of English culture, but much of that is despite its flaws, not because of them.

Most of all, though, we saw just how persistent, just how pervasive, the Premier League is, and how little it needs games — actual action — to remain.

There has been no soccer, no Premier League, for 100 days, but the noise — the claim and counterclaim, the arguing and the briefing, the venality and the tribalism, the passion and the faith, the self-interest and the self-loathing — never stopped. Its absence just became another plot device, a storyboard on which to depict the same narratives as ever.

Soccer, the sport, is back in England this week. Soccer, the entertainment complex, never went away.

The remainder of the PGA Tour schedule this season will be played without spectators after the organizers of four tournaments...