UEFA Champions League Will Return in August in Portugal

It will be the Champions League, but not like any version before it.

Three months after it was suspended because of a spreading coronavirus pandemic, the Champions League took its first concrete steps toward returning on Wednesday when officials from European soccer’s governing body, UEFA, announced that the competition would be completed as an eight-team knockout tournament in August in Portugal.

Many of the details for the event, from the lineup of teams that will play to the health protocols to keep players and staff members from contracting — or spreading — the coronavirus are still not finalized. All of the plans and procedures are subject to change; UEFA’s president, Aleksander Ceferin, said he did not see a reason for a “Plan B” yet, and noted the organization was assessing the situation on a daily basis.

At the moment, UEFA does not expect fans to be allowed into any of the games — per government limits on public gatherings — which could create a situation in which the tournament’s final stages, which are traditionally some of the most high-stakes, highest-rated and most emotional matches in club soccer, will take place without their customary pageantry.

In many ways the challenge for UEFA, the tournament’s organizer, has been greater than that faced by any of the domestic sports championships that have recently resumed, or are making plans to do so. Unlike the Premier League or the N.B.A., UEFA had to find a way to restart a partly finished international competition in which some teams had advanced further than others, and to complete it amid ongoing restrictions on cross-border travel and strict quarantine rules.

The solution? A 12-day, one-and-done Champions League featuring eight teams that will be played in two stadiums in Portugal’s capital, Lisbon, and culminate in a final on Aug. 23 at Benfica’s Estádio da Luz.

UEFA’s second-tier Europa League will end in a similar fashion, with the competition’s last eight teams playing out in four venues in Germany around the same time. The Europa League final will take place in Cologne on Aug. 21.

But first, the fields will need to be set. The Champions League was halfway through its round of 16 in March when games started to be postponed. It remains unclear if the second legs of the remaining round of 16 ties can take place at their original venues without fans, a move that teams that had yet to enjoy home field advantage in the two-game series have been lobbying for. Should that not be possible, those games — which include top clubs like Barcelona, Real Madrid, Juventus and Manchester City — also would be moved to Portugal, UEFA said. A final decision will be made in early July.

Three of those four ties are too close to call, with only the perennial German champion Bayern Munich, which beat Chelsea by 3-0, holding more than a one-goal advantage. Both Juventus (against France’s Lyon) and Real Madrid (against England’s Manchester City) will need to overcome one-goal deficits to advance. Barcelona and Napoli will try to play their second leg in Italy after tying the first, 1-1, in Spain.

It is unclear what the effect of finishing domestic seasons at different times will have on teams competing for European titles in August. The French champion Paris St.-Germain, for example, may not have played a competitive game since March by the time of its quarterfinal game. Bayern Munich, which clinched its eighth straight German title on Tuesday, will have at least a month off before their first games in Lisbon in August. The last round of games in England’s Premier League are slated for July 26. 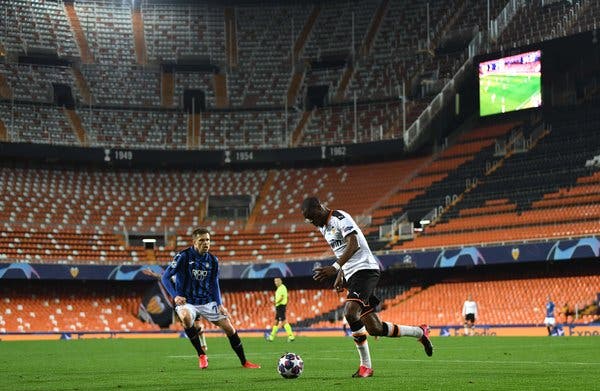 Valencia and Atalanta played their Champions League match in an empty stadium in March.Credit…Pool, via Agence France-Presse — Getty Images

UEFA, like many other soccer competitions, faced the financially devastating prospect of paying punishing rebates to its broadcast partners if it did not find a way to resume, and declaring the competition over always seemed an unlikely option. Its president, Ceferin, had insisted from the earliest days of the soccer stoppage that all efforts would be made to complete the club competitions that had begun. To do so, UEFA gave national leagues a deadline of the first week in August to finish their own incomplete championships.

Most countries have found a way. Germany’s top division, the Bundesliga, became the first of Europe’s top leagues to return when it took the field in May, and it is on track to finish its season before the end of June. Leagues in Spain, Italy and England have resumed in the past week, and also are scheduled to end well before the Champions League reaches its conclusion. That will make the Champions League final in Lisbon — coming 14 months after the event’s first preliminary-round games — the bookend to one of the strangest European soccer seasons in history.

The Champions League had been set to finish with a showcase final in Istanbul on May 30. Now it is more likely to end in empty stadiums — the Estádio José Alvalade, home to Sporting Club, and Benfica’s Estádio da Luz — with strict hygiene protocols and teams sequestered in bio-secure hotels across Lisbon. (There is, however, hope that some fans could be allowed to enter the stadiums if the authorities lift restrictions by August.)

UEFA, which completed the proposed changes to the competition during a meeting of its executive committee held by video conference earlier this week, has agreed to host next season’s final in Istanbul instead. Next year’s final awarded to St. Petersburg, Russia, now will take place there in 2022.

By playing the competition in one location, UEFA will inadvertently spotlight a format FIFA, soccer’s global governing body, has developed for a new quadrennial version of its Club World Cup. FIFA has been forced to reschedule the first edition of the event — which had been fiercely resisted by UEFA — because of the coronavirus. It had been set to be played in China next summer, but those dates are now unavailable because of scheduling clashes with the rearranged European and South American national team championships.

Ceferin said the measures taken to complete this season’s event would not be used as a blueprint; he said he considered them the only way for UEFA to resolve a situation that it was forced into.

Elena Delle Donne, the league’s reigning most valuable player, said she had been denied a medical waiver for the W.N.B.A.’s...

As Training Camps Near, N.F.L. and Players Debate Protocols

As sports leagues rushed to delay or cancel events in March, the N.F.L. made a bold promise to start its...