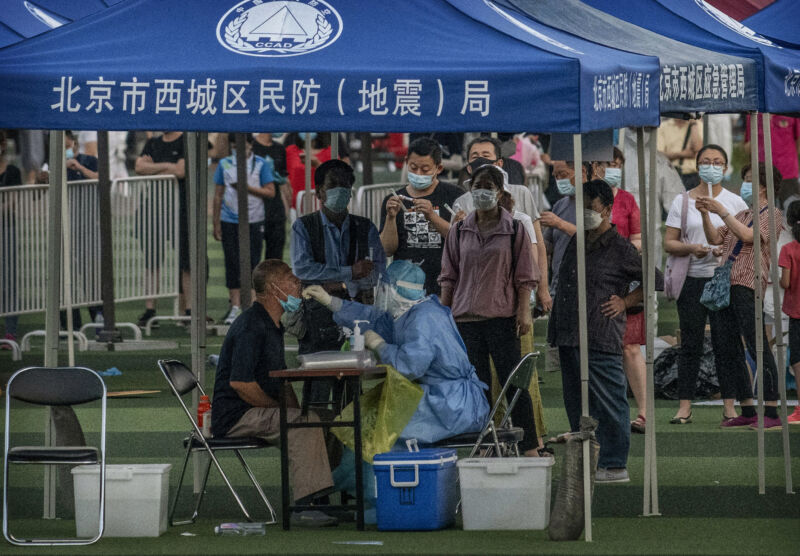 Enlarge / BEIJING, CHINA – JUNE 15: A Chinese epidemic control worker performs a nucleic acid test for COVID-19 on a man who had contact with the the Xinfadi Wholesale Market. Authorities are trying to contain the outbreak linked to the Xinfadi wholesale food market, Beijing’s biggest supplier of produce and meat. Several neighborhoods have been locked down, and at least two other food markets were closed, as tens of thousands of people are being urged to get tested for COVID-19 at sites set up around the city.

Authorities in Beijing have locked down parts of the city, reinstated some restrictions, and are testing tens of thousands of residents amid a burst of new SARS-CoV-2 infections.

As of Monday, authorities have reported 79 cases in four days. Almost all of the cases link to the Xinfadi food market, the city’s largest wholesale meat and vegetable market. The market has a staggeringly large number of patrons, and experts fear that there are many more cases yet to be identified, each of which could spark additional outbreaks.

Before this, Beijing had gone more than 50 days without seeing any locally acquired cases of COVID-19.

In a press conference Monday, experts at the World Health Organization said the outbreak was significant.

“Certainly, in China, when you have spent over 50 days without having any significant local transmission, a cluster like this is a concern and it needs to be investigated and controlled,” said WHO Executive Director Michael Ryan. “And that is what the Chinese authorities are doing.”

Over the weekend as the outbreak in Beijing became clear, authorities there shut down and sealed off the market, locked down some nearby neighborhoods, began extensive testing, and banned large gatherings.

With the swift action, Zeng Guang, a senior epidemiologist with the Chinese Center for Disease Control and Prevention, was quoted in the Beijing Daily as saying that “Beijing will not become a second Wuhan.” He urged residents to not be nervous and “follow the government’s command, trust the disease control personnel, and trust the doctors.”

WHO Director General Tedros Adhanom Ghebreyesus noted the outbreak in his opening remarks at today’s press conference, adding that “Even in countries that have demonstrated the ability to suppress transmission, countries must stay alert to the possibility of resurgence.”

Meanwhile, health experts in the United States are warning of the potential for a similar reinstatement of restrictions and lockdowns. Cases are increasing in 22 states, and many of the increases are not due to increased testing. Yet, many Americans appear to be shrugging social-distancing recommendations and precautions.

On Sunday, New York Gov. Andrew M. Cuomo warned that the state could suspend reopening plans after receiving around 25,000 complaints of businesses violating social-distancing measures. Houston is also considering reimposing a lockdown after a resurgence in cases, according to CBS News.

Scientists have discovered the first direct evidence of the so-called Gulf Stream “blender effect,” where the waters mix on either...

One day after it started Phase III testing of an antibody cocktail that could be used for COVID-19 patients, Regeneron said...